(Minghui.org) Today's news from China includes incidents of persecution that took place in 15 cities or counties in 10 provinces. According to this report, 4 Falun Gong practitioners were subjected to mistreatment during their detention, and at least 25 were illegally arrested. 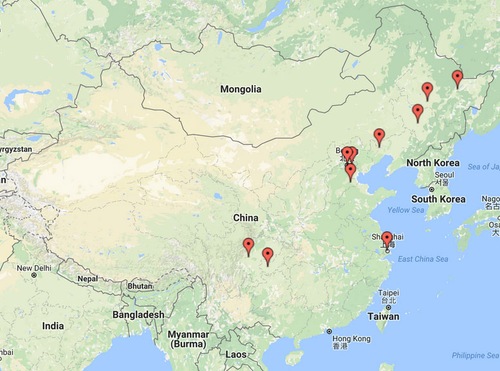 Ms. Jin Xiuxian, Ms. Dong Haixiang, and other practitioners from Lingyuan City were arrested by patrol officers from the Kazuo County Domestic Security Division on the morning of December 25, 2016 for talking to people about Falun Gong at the Dachengzi farmers market. Two practitioners have returned home. Ms. Jin was taken to the Chaoyang City Detention Center. Ms. Dong is in the Kazuo Hospital for health reasons.

Ms. Xu Yandong, in her 50s, and her son were arrested by officers from the Sunqiao Police Station, Pudong New Area, at their rental home in the Zijingyuan Residential Community, Sunqiao Town, on the morning of December 22, 2016. Both mother and son are held in the Pudong New Area Detention Center. Ms. Xu was to be held for ten days of detention and her son for five days.

Mr. Wang Maojie, a teacher at the Nonghe Town Central Primary School, was sentenced one year in prison and fined 2,000 yuan by the Tonghe County Court.

A female practitioner named Xiaoping and Ms. Zhang from Botou City were reported for talking to people about Falun Gong on the afternoon of December 25, 2016. They were arrested by officers from the Qiqiao Police Station. Both practitioners escaped when they were taken to the city hospital for physicals.

Ms. Jiang Hong from Tangyuan County was abused in the No. 9 Ward, Harbin Women's Prison. She was forced to sit on a small stool for over four hours every day without taking a break. She was beaten until her head was bleeding. Sometimes she was tied to a bed, not allowed to use the toilet, and her mouth was sealed with tape.

Ms. Lin Keyu and another practitioner were arrested by officers from the Xibu Police Station on December 22, 2016 for talking to people about Falun Gong. The officers confiscated Falun Gong materials when they searched her. Ms. Lin's gold earrings and ring were confiscated also. She was brought back home by her son that afternoon.

Mr. Wang Ge was secretly tried at the Chaoyang District Court on the morning of December 8, 2016. He was given a three-year-and-six-month prison term.

Ms. Zhu Jifang, 67, from Fuqiang Village, Jiangbei District, was arrested at the Chongqing Train Station ID checkpoint on December 26, 2016. She was held in the Railway Police Station. The Falun Gong materials she carried were confiscated. She was then taken to the Yuhuacun Police Station for interrogation. She was released after 7 p.m. that evening.

Ms. Chen Delan from Chenfu Village, Chenfu Township, had long been placed under surveillance. She was harassed many times. She was sentenced to forced labor several times. As a result of forced labor and other abuse, she suffered from liver cirrhosis ascites, heart failure, and other diseases. Ms. Chen passed away on June 13, 2016. She was 61 years old.

Mr. Peng Zhijiang was arrested on May 24 while distributing Falun Gong materials in Taihui County. He was sentenced to four years and fined 10,000 yuan after two court appearances, on December 7 and December 26, respectively.

Judge Wu Weibing from the Taihu County Court refused to answer when Mr. Peng's family asked why he sentenced a good person to prison without any legal basis.

She testified in her own defense and requested an acquittal. Judge Yun Renlong said, “It seems we got the wrong person, but we have no authority to release you.” He sentenced her to three years.

Ms. Zhong has filed an appeal to the Lianyungang Intermediate Court. She is requesting an open session to hear her appeal. Mr. Zhang Zanning has agreed to represent her.

Yushu City Court tried Ms. Jiang Ping at 7 a.m. on December 16, 2016. Her younger brother was the only one who attended the trial from her family. In less than 10 minutes, the judge announced that Ms. Jiang was sentenced to three years and three months’ imprisonment.

The judge didn’t give Ms. Jiang any chance to speak or to defend herself. The trial ended in a hurry.

Mr. Wang Jianping was sentenced to four years in prison by the Decheng District Court on February 5, 2016.

Ms. Huang Yuping and Mr. Wei Lesheng were sentenced to three years’ imprisonment by the Qihe County Court on August 12, 2016.

Ms. Wang Yanzhi was sentenced to four years in prison on November 22, 2016.

Ms. Cai Guanying was sentenced to eighteen months’ imprisonment by the Huicheng District Court on December 23, 2016. She received the indictment on the same day and has submitted an appeal to her lawyer.

“Experiencing the Extraordinary Power of Dafa”