(Minghui.org) Practitioners Ms. Yao and her husband, Mr. Ma, are from a major city in northern China. They immigrated to Vancouver, Canada in 2003. They are known as a quiet and peaceful couple who take lightly any worldly strife. This is because they practice Falun Dafa. 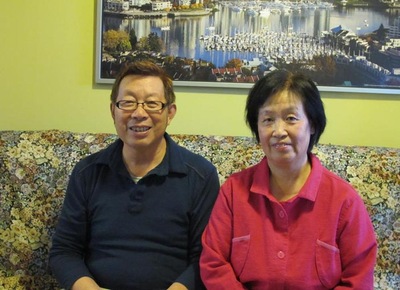 Search for a Cultivation Practice Successful

Chinese qigong practices were very popular in China during the 1990's. In the hope to find a qigong practice to her liking, Ms. Yao went to different parks, as people generally practiced in groups in parks. She did not know what she was looking for but did not see anything that caught her interest.

A university student was assigned to work at Ms. Yao’s workplace in early 1994. This student practiced Falun Dafa, and what she heard caught her interest. She attended the nine-day series of lectures by the founder of Dafa, Master Li Hongzhi.

The student lent Ms. Yao Falun Gong, the introductory book of the practice. Ms. Yao finished reading the book in one setting and decided that this was what she was looking for. The next day she went to a practice site in the city's central park and started to learn the exercises.

She bought two tickets for Master’s nine-day lecture series in Jinan, Shandong Province, which was to be held on June 22-28, 1994. As her husband could not take time off from work, she went to Jinan City with one of her classmates.

“A few individuals may fall asleep and wake up as soon as I finish my lecture. Why is that? It is because their brains have illnesses that need to be treated. One will be unable to stand it if one’s brain is worked on. Therefore, one must be put into a state of anesthesia or become unconscious. Nevertheless, some people do not have a problem hearing me. Though they may sleep soundly, they hear everything without missing a single word. They will become energetic afterwards, and will not feel sleepy even if they go two days without sleep.” (Zhuan Falun)

During his studies, Mr. Ma read books about cosmic changes, other dimensional spaces and qigong practices. He had many questions but had not found the answers. After practicing Falun Dafa and reading the book Zhuan Falun, the main book of Dafa, his questions were answered. He started to practice Falun Dafa in April 1994.

Doctors were unable to find the cause of blood in his urine since 1975. Even an over 100-year-old doctor of Chinese medicine could not find what was wrong with him.

When urinating one day, he heard a sound. He saw a stone, half as big as a soybean, had dropped into the toilet. Since then, he no longer had blood in the urine.

Since cultivating in Falun Dafa, the couple has not only become healthy but also understood that everything that exists in the world has its karmic relationship. They have since taken fame and profit lightly.

They live with their son in Vancouver. It is inevitable that friction occurs when two generations live together. When this happened, the couple looked within to find where they needed to improve. If needed, they apologized to their son or daughter-in-law. Thus, their family has a harmonious relationship.

Telling the Truth about Dafa to the Chinese People

Despite the couples ages, they do house chores for their son's family and babysit their grandchild. They also focus on how to clarify the truth to people about Falun Dafa.

Many overseas Chinese have misunderstood Falun Dafa and have even stood on the side of the Chinese Communist Party (CCP) because they were deceived by the CCP's lies. The book Nine Commentaries on the Communist Party has exposed the evil nature of the CCP, its history, and its inevitable end. People who have been poisoned by the CCP's lies are all at risk when the CCP loses power. Ms. Yao wants the Chinese people to know the truth about Dafa.

When their son’s friends visited, Ms. Yao told them what Falun Dafa is, the reason for the CCP’s persecution of Falun Dafa, and why they should quit the CCP and its affiliated organizations. The son's friends have quit the CCP.

Mr. Ma’s classmates traveled to Canada and stopped over in Vancouver. Upon hearing about this, the elderly couple visited them in their hotel and talked to them about Dafa for over an hour. Two quit the CCP. Although one did not quit the CCP, the couple laid a good foundation and thus believe that next time around that classmate will quit the CCP.

In recent years, many Chinese students have come to Vancouver.

“Upon seeing these kids have been instilled with lies since childhood,” said Ms. Yao, “I must assure that they are not ruined.” She often goes to the bus stops where these students wait for their buses, and talks to them about Dafa, and many students have quit the CCP.

Great Privilege to be a Practitioner

“The CCP started to persecute Falun Dafa in 1999,” said Ms. Yao. “Practitioners experienced enormous pressure and psychological persecution in China. We were secretly watched and monitored, and we were intimidated. They demanded that we write a guarantee statement that we would give up the practice. We did not succumb despite the pressure. Then, we immigrated to Canada. Since then, we have had a relatively relaxed environment for cultivation.”

It has already been more than 20 years since the couple started on their cultivation path. The elderly couple is energetic and always in a good mood because they practice Dafa.

The are members of the Tian Guo Marching Band. Mr. Ma plays the tuba, and Ms. Yao plays the saxophone, and they participate in every parade.

“No words can express our gratitude to Master,” said Ms. Yao. “We are so lucky to be Falun Dafa practitioners! I wish that all people, especially the Chinese people, won’t be deceived by the CCP's lies, and all will come to learn the facts about Falun Dafa.”

“My Changes While Committing the Fa to Memory”