(Minghui.org) Ms. Wang Xibin filed a criminal complaint against former Chinese leader Jiang Zemin in June 2015 for torture and other suffering that she and her family endured–all because she practices Falun Dafa, a spiritual discipline persecuted by the communist regime.

In a span of 12 years, she spent close to 9 years in some form of detention, during which time she was brutally tortured for refusing to renounce Falun Gong.

Ms. Wang not only lost her job following her first arrest, but she was also severely injured during detention. More than 14 years have passed, and she still cannot raise her arms fully.

Below is an excerpt from her complaint to the Supreme People's Court.

In June 2001, several plainclothes officers arrested my son when he was posting informational materials about the persecution of Falun Gong. They then broke into my home without a warrant and confiscated all my Dafa books, tapes, and other personal belongings. They also arrested me and my daughter, who does not practice Dafa.

Because I refused to confess, officers tortured me using the “Carrying a Sword in the Back” position: I was hung up with both hands tightly tied together behind my back, with one hand pulled down over the shoulder and the other hand pulled upwards against my lower back. Because of this torture, I still cannot raise my arms 14 years later. 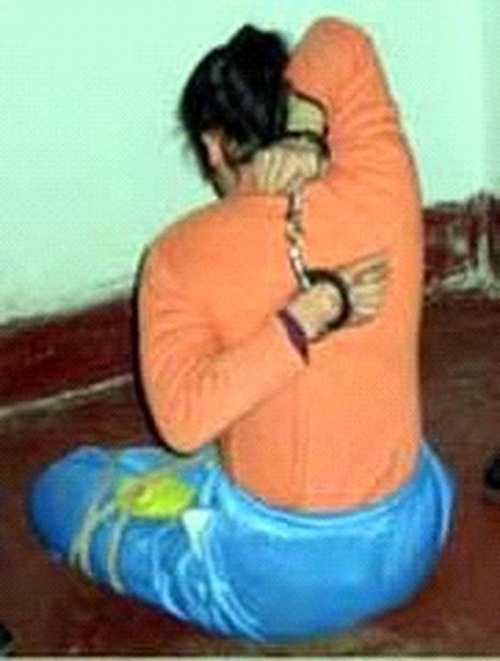 Torture re-enactment: “Carrying a Sword on the Back”

I was taken to Shenyang No. 1 Detention Center. Upon arrival, I was stripped of all my clothes. I went on a hunger strike to protest the mistreatment. I was force-fed so brutally that I coughed up blood. I also lost my job during the detention.

In June 2002, I was illegally sentenced to three years in Liaoning Women's Prison by Tiexi District Court. Each day, I did 12 hours of forced labor and slept less than five hours.

To “transform” me, the guards forced me to watch propaganda videos attacking Falun Gong. They had inmates chastise and isolate me. They then tried to starve me into submission.

When these approaches failed to “transform” me, the captain forced me to stand up straight in a cold, damp car wash room for 12 hours a day. The inmates assigned to watch me stopped me from hanging and drying my clothes at night.

This lasted seven days. The captain then forced me to stand in a night shift room at night and had inmates take turns to attack me. Some verbally abused me, some spat on me, some pinched me, and some beat me until I lost consciousness.

While I was unconscious, the inmates held my hand and put my fingerprint on a pre-printed “transformation statement.”

During the SARS period in 2003, I wrote a solemn statement declaring that my “transformation” was null and void, as it was done by force. One month before I was released, I wrote in a final statement that Dafa practitioners always cultivate in accordance with the principles of “Truthfulness-Compassion-Forbearance” to become good people.

One evening in December 2004, another practitioner and I were arrested and taken to Tiexi Police Station while telling people about Falun Gong and the persecution. We were tied to a chair. My home was ransacked that night. We were taken to Shenyang No. 2 Detention Center the next day.

I went on a hunger strike and was force-fed with a concentrated saline solution that hurt my stomach. I was sent to Masanjia Labor Camp a month later.

In the labor camp, the guards forced me to sit on a “small stool” and listen to propaganda broadcasts everyday. They pinched my eyelids when I closed eyes and hit my head against wall when my head drooped.

When we refused to wear inmate uniforms one day, a male guard came to investigate. I told him that we were not criminals, and that we behaved well and kept the area clean even at our own expense.

I advised him not to participate in the persecution. He became angry and pushed me outside. He then hit me hard and kicked me in the head and ribs. The injury was so severe that someone had to help me lie down and get up.

I was once locked up in a room, where a guard tried to brainwash me every day. They twisted the Dafa teachings and slandered the founder of Dafa. Despite the tremendous mental stress, I did not waver.

They took me to another room a few days later. From this room, I could see people passing by. I could also hear swearing, beatings, and shouting in the other room, but could not know what was happening. This situation made me extremely nervous and unable to sleep.

One day, I told a male guard that I will continue to practice Falun Dafa. He handcuffed me to bed railings with both hands wide open and tied up my legs with rope. It hurt so badly that I passed out a little while later.

When I was unconscious, he forcibly applied my fingerprint to a “transformation statement.” I later learned that everyone on my floor had been forcibly “transformed” because of the brutal torture.

I was detained for two months longer than my jail term because I once refused to peel garlic. When I was released, I was picked up by officers from Tiexi 610 Office. On the way home, I said that Truthfulness-Compassion-Forbearance is good. For this reason, I was taken to another labor camp for a month.

On June 8, 2009, I was arrested when giving out a Shen Yun Performing Arts DVD to a man, who led officers to arrest me. My home was ransacked twice, but the police found only one Falun Gong flyer.

I was taken to Shenyang No. 1 Detention Center, where I was forced to have blood drawn. In March 2010, I was transferred to Liaoning Women's Prison.

During the day, I was forced to watch propaganda videos and read books attacking Falun Gong. At night, I was forced to sleep without a blanket on the cold, bare floor next to a window. The abuse lasted three months.

When the three-floor detention center building was being repainted, I was forced to clean all of the floors, doors, and windows. I was exhausted.

When I returned to my team six months later, I was assigned to work at several clothing production machines until my release. I dreaded the stressful work, because I would be punished if there was any operational problem or a shortage of product quantity or quality.

My Family Suffered, Too

My family endured enormous suffering during my eight-plus years of detention. They were interrogated and verbally attacked during each visit.

My husband had to ride a bicycle to visit me because he would get motion sickness on buses. He had frostbite on his feet every winter.

My son was hurt the most. He stopped practicing Falun Dafa after he was arrested and forcibly “transformed” in a labor camp. He gets anxious whenever he hears anything about Falun Dafa.

My daughter became absent-minded after my first arrest. She would cry out whenever she thought of the arrest, no matter where she was and how many people were present.

“Good Luck in an Unlikely Place”