(Minghui.org) At the 2016 New England Falun Dafa Experience Sharing Conference in Boston on September 5, seventeen practitioners gave speeches. The sincere talks resonated with the audience and attendees said they were surprised at some of their fellow practitioners, who had not been very vocal in the past, but who had such moving experiences to share. 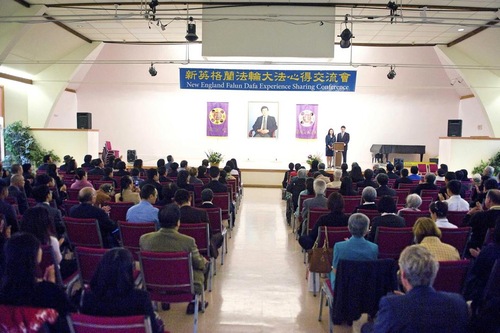 A practitioner who works at a hospital talked about how she dealt with conflicts with her co-workers.

“I didn’t get along well with a co-worker. One day I heard her badmouthing about me in front of other people. I was not moved. I smiled and let it pass. That night, when I did the sitting meditation, I felt like my legs were wrapped in cotton and my whole body was surrounded with white and bright energy. On another day, this coworker was mean to me again. I recalled Master’s words, and reminded myself that I need to cherish every life, and not expect every life to be nice to me.”

Amazed by the Power of Dafa

A new practitioner, who had prostate cancer, said in his speech that after doing the exercises and reading the Fa with fellow practitioners at the exercise site, one of his pathogenic indexes had decreased by almost 40-fold. He also said that when doing the exercises, he felt a strong electric current flowing through his body, and a considerable amount of heat poured into his legs. He was amazed by the power of Falun Dafa.

Treating Oneself as a Cultivator

A practitioner said he passed out one morning, and had blood in his stool. He reminded himself: “I am a cultivator, and should not be deceived by this illusion. I should continue to do what I need to do.” Then he felt completely fine. Another time, he had trouble breathing when sleeping. He didn’t panic, and asked Master for help. Almost instantaneously, the symptom was gone.

A young practitioner talked about how she got rid of her attachments during Shen Yun ticket sales.

“I talk fast and lack patience. My ticket selling partner, however, is a calm and patient practitioner. He successfully convinced many people to buy tickets. Watching him, I came to a better understanding of Master’s teaching of the exercise movements—‘gentle, slow, and smooth.’”

“After I realized this, I started to slow down and patiently listen to others. Once I talked to a couple who really wanted to see Shen Yun, but had a schedule conflict. I tried my best to put down any pursuit, and not to think about whether they would buy tickets, and patiently went through the Shen Yun album with them. Finally, they moved things around on their calendar, and bought two tickets.”

Another practitioner said that he used to be a cold and introverted person, never willing to deal with people. But now he needs to be a salesman, a job he used to hate. “It was a great chance for me to cultivate and get rid of my attachments. I told myself just to listen to Master, and do what I should do no matter whether I liked it or not,” he said in his speech.

One practitioner’s task was to put up Shen Yun posters in remote mountain areas. She said: “I used to be a spoiled girl, and always relied on other people for many things. But now I had to drive more than 10 hours every day on my own. It was a huge test, but it has made me stronger, more independent, and more confident. I made great strides in my cultivation through this project.”

“Mother and Daughter, Tortured to Near Death for Their Belief, Sue Former Chinese Dictator”