(Minghui.org) The Tian Guo Marching Band was invited to perform in Kraków, Poland, on August 26 and 27 to enthusiastic applause from the many spectators.

This was the fourth stop on the band’s tour, following Vienna, Austria, on August 23rd and Szeged and Eger in Hungary on the 21st and 20th. 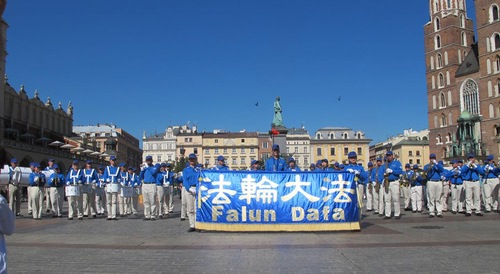 New Energy to an Ancient City

Kraków is the second largest city in Poland and was the capital of the Crown of the Kingdom of Poland from the 11th to 15th centuries. As the band assembled on the Main Square, which was built in the 13th century, a big crowd quickly gathered.

In both Polish and English, a practitioner explained the peaceful meditation practice of Falun Dafa and then told the audience that it is being severely persecuted in China. Many of the bystanders listened attentively and signed petitions of support.

Some pedestrians followed the band as it marched through town for four hours. “This music is marvelous! It is a pleasure to listen and gives you energy,” one of them said.

“Yes, it’s really great. I have heard about Falun Dafa before. They [practitioners] work really hard to protect their faith,” another remarked.

Russell Shankman and Claire Jones, husband and wife from Switzerland, listened to the music for a long time. Mr. Shankman admired the majestic melodies. He said he would look for more information about Falun Dafa on the Internet and hoped the persecution would end soon. 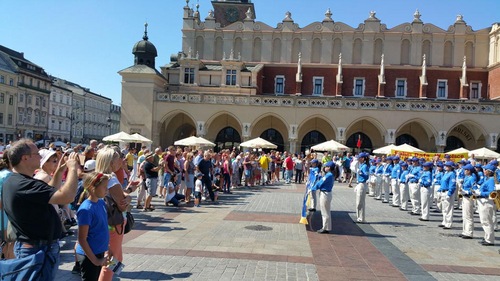 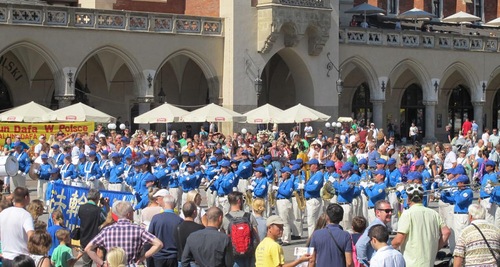 The spectators enjoy the band’s music.

“Your Efforts Will Be Appreciated”

Two tourists from Spain, a mother and daughter, said they liked the music very much. “I am a tour guide,” said the mother. “Could you tell me more about the beautiful music and about Falun Dafa?”

When a practitioner mentioned the suppression in China, the mother said she had read about forced organ harvesting from practitioners in China in a Spanish newspaper. “Keep up the good work! It will make a difference—more people will hear about it,” she said encouragingly. “Your efforts will be appreciated.”

Viktor Kristionsson and his wife are both from Iceland. Mr. Kristionsson said he remembered that, when Jiang Zemin, the former Chinese leader who banned Falun Dafa, visited Iceland in 2002, he pressed the government to bar practitioners from entering the country. Many Iceland people supported the practitioners, and one newspaper published a full-page article apologizing to them.

Now that forced organ harvesting in China is being reported in the media, Mr. Kristionsson said more people would realize just how brutal the Chinese Communist Party really is. He said he would look online for more information about Falun Dafa and the main book of the practice, Zhuan Falun.

Mr. Isela, a Frenchman who works in Kraków, was impressed by the music and asked many questions. He signed a petition calling for an end to the persecution in China and learned the first four exercises.

“Thank you for introducing me to Falun Dafa. It is truly wonderful. I will continue to do the exercises and read more online,” he said. 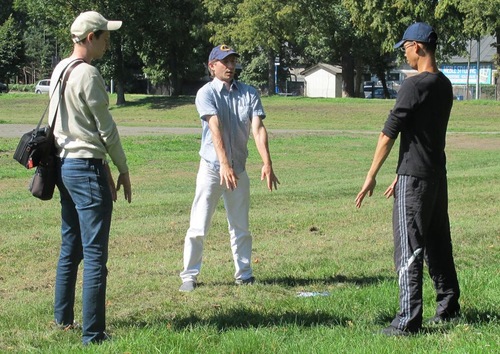 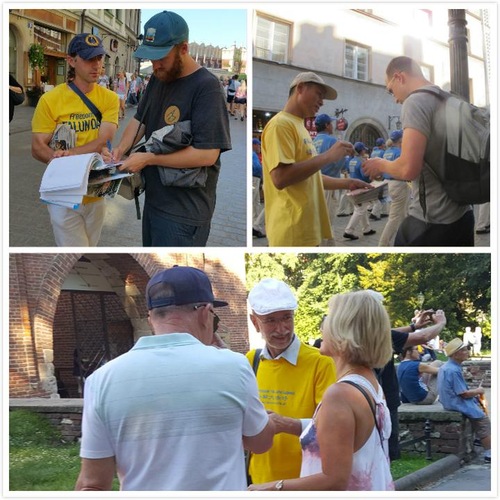