(Minghui.org) The Art of Zhen Shan Ren (Truth, Compassion, Tolerance) International Exhibition was held in the art gallery at Gamla Stan in Stockholm, Sweden from July 18 to August 7, 2016.

More than 4,000 guests from 56 countries attended the exhibition, including youths from mainland China. The guests wrote hundreds of notes in the guest book, and one drew a beautiful lotus flower thanking the presenters for a “fantastic and impressive exhibition.”

The exhibition volunteers noted that many visitors had already heard about the persecution of Falun Gong and the Chinese regime's killing of Falun Gong practitioners for their organs; they came to the art gallery to learn more about the meditation practice and what is happening in China.

One day, five teenage boys walked in front of the gallery with their mother. When their mother heard that the exhibition's theme was related to Falun Gong, she said to her children, “What is this? Do you know? This is what we discussed last night about Falun Gong. We are not going to miss it!” After entering the gallery, the boys viewed the artworks intently and listened to the explanations very quietly. Before they left, they posed for a photo beside the painting “Illumination.” 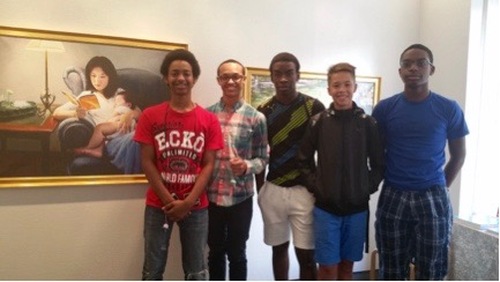 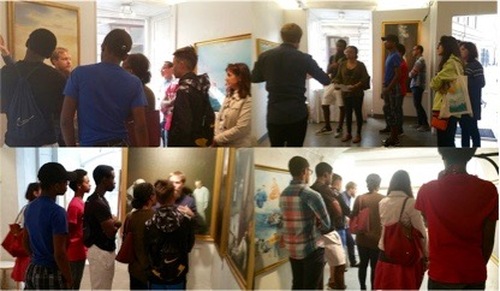 Many Express Interest in Falun Gong and the Persecution

The gallery is located in a tourist area and attracted visitors from all over the world. The organizers provided exhibition guidebooks in more than ten languages. One day, eight visitors from Brazil walked into the gallery, but only one young girl could speak English. Despite the language barrier, they were still attracted by the paintings and appeared to understand what they saw.

One woman in the group was eager to know the story behind each painting, including “Buddha,” “In Harmony,” “Fulfilling Vows,” “Joyfully Climbing the Ladder to Heaven,” and “Pure Lotus.” She asked the young girl to explain each painting in her language after listening to the English explanation. After hearing that all the stories and books can been read in Portuguese on the Internet, she smiled. They all bought postcards featuring the exhibition.

Two young Americans stood in front of painting “Joyfully Climbing the Ladder to Heaven” and discussed why the girl's face looks so charming and happy. One said, “You look at the girl's eyes. She saw something above the painting. You can think, what would it be?” When he learned that the book which the girl is holding was Zhuan Falun, he immediately took out a pen and paper and wrote down the book’s name. He happily said to his friend, “This is just what I was looking for. I have to read this!”

Greek Artists: “This is an unusual subject”

An artist couple from Greece started by carefully examining the canvases, discussing color and praising the quality of the works.

But soon they realized that the theme of the exhibition was very unusual. They were startled when they saw the paintings “July 20th,” “Unshakeable Faith,” and “Illegal Organ Harvesting.” The wife asked many questions, including what Falun Gong is, why it is persecuted in China, and what cultivation is.

When she heard that Falun Gong was introduced to the public in China in 1992 and that people practice it all over the world, she was saddened that she did not know about it. She said the paintings were very unusual and added that she would read Zhuan Falun to learn more about it. 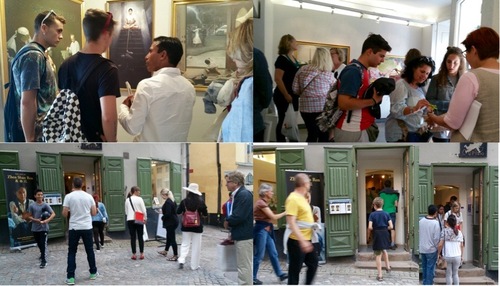 The exhibition saw visitors from mainland China each day. One Chinese man saw a painting on the exhibition advertisement, read the text “Zhen, Shan, Ren,” and asked, “Is this something to do with Falun Gong?” When he learned that it was, he smiled and said, “It is so beautiful. I want to see it, I want to see it!”

He viewed all the paintings and kept saying, “The paintings are so professional, marvelous, unbelievable, and beautiful. I didn’t think I could see such high-quality paintings here. Falun Gong is really something exceptional.”

He explained that he was with a group but had lost his way, so he had the chance to see the exhibition. He viewed the paintings again and took a few photos outside the gallery. He later returned, waved at the exhibition staff, and shouted, “I'm so lucky, so lucky! Thank you, thank you!”

PhD Students from Shanxi: “We want to know about Falun Gong”

“Why is this art exhibition named ‘Zhen, Shan, Ren?’ What does it mean?” asked two young Chinese visitors after they listened to the information about the sculpture “Buddha” by Professor Zhang Kunlun. They introduced themselves as PhD students from Shanxi Province.

One student said, “I asked these questions, because something is strange. Think about it. Other than China, all the Western countries, especially big countries like the United States, Canada, Britain, France, as well as Hong Kong and Taiwan, all of them allow and support Falun Gong. Only China does not. Why is that? There must be something that the Chinese government is not telling us. Although we can break through the Internet firewall to learn the facts, I still want to have my own understanding of what Falun Gong is.”

Swedish Student: “I saw the light of hope from the paintings”

A Swedish university student told a volunteer that he learned about the paintings from the Internet and loved all of them, but never had a chance to see them in person. He said it was because these paintings brought him the light of hope.

“It is true, it is very sad when I learned the story behind the artworks. But despite the sadness, I feel that the light of hope is strong. I don’t know why.” He stood in front of the painting “Illumination” and said, “Look at this painting, she holds her child in her arms as she reads the book. The child is the hope, and the light is the hope. She has hope, which is coming from the book.” He said, “I'll be back tomorrow with my girlfriend and friends. I love these paintings.” 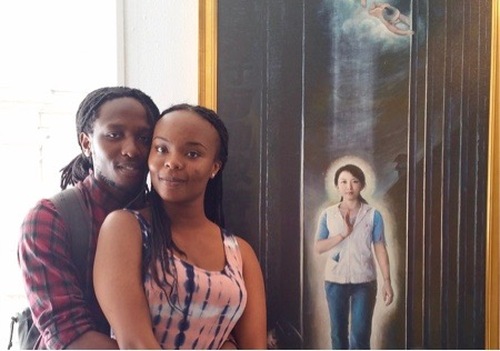 London Youth: “I want to be the girl in the painting”

A young woman from London said that she liked the painting titled “Freed by Faith.” After learning that all the works are based on real events, she asked, “Is it true? How many Falun Gong [practitioners] can be like her? I like her. I want to be her. What should I do to become like her?”

German Man: “Every stroke in the painting has meaning”

There were so many visitors on the last day that the exhibition was extended by one hour. A visitor from Germany said, “These paintings are so finely created by the artists. No line is irrelevant.”

He stood in front of the “July 20th” painting and said, “Looking at this door, it divides the painting into two worlds. On the right, the inner door is warm, since it uses warm colors. But on the left, the outside door is cold, with cool colors. This represents a destruction of beauty by evil. I can understand the painting, but I don’t know the story. What happened on that day? What is Falun Gong?”

He read the introduction of Falun Gong provided, hoping to understand the meaning of the painting and “Zhen, Shan, Ren” (Truthfulness, Compassion, Forbearance). 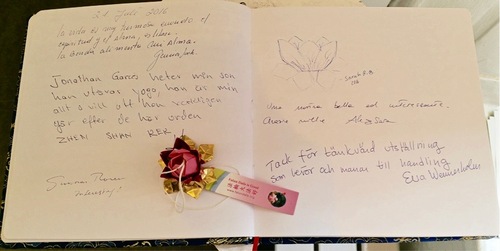 Visitors filled up 33 pages in the guestbook, six times more than in the previous year. Some drew pictures in the guest book to express their feelings and thoughts. They thanked the people who “brought such a beautiful and meaningful exhibition, Zhen, Shan, Ren.” Another visitor wrote, “A really impressive exhibition that will be kept in mind.”