Mr. Wang Zhiwen, a well-known former coordinator of the Falun Dafa Association, was denied travel abroad to visit his daughter in the United States. The practitioners called for the government to reissue Wang's passport and allow him to travel abroad. 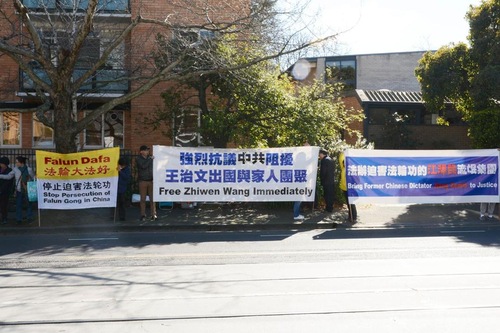 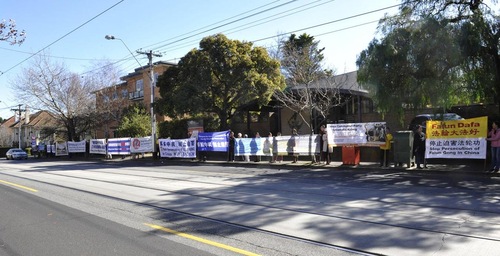 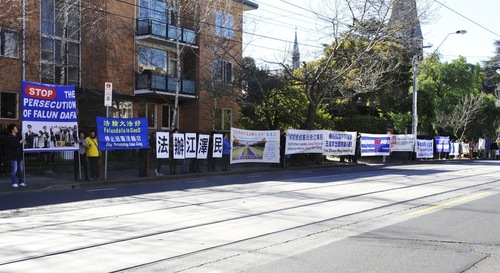 Falun Gong practitioners in Melbourne, Australia, protest in front of the Chinese Consulate, calling for the CCP to free Wang Zhiwen.

When the communist regime began its persecution of Falun Gong on July 20, 1999, Wang was one of the first to be arrested. He was subsequently imprisoned for 15 years and brutally tortured. In prison, all of his teeth were broken, his nails were pierced with toothpicks, and he was restrained with 50-pound shackles in solitary confinement.

Wang has been under house arrest and constant surveillance since he was released from prison in 2014. His daughter Danielle Wang, a U.S. citizen, and son-in-law Jeff Nanarella went to Beijing recently in an attempt to bring him to the U.S. However, border agents in Guangzhou, Guangdong Province, told him his passport had been revoked and refused to allow him to leave the country.

Mr. Fan Huiqiang, spokesperson for the Australian Falun Dafa Association in Victoria, strongly condemned the CCP for refusing to allow Wang to travel. He said, “We urge CCP officials at all levels, including Chinese Consulate employees, to see the current situation clearly. The persecution of Falun Gong was dictated by Jiang Zambian, but now he is facing imminent arrest. If you choose to follow him, you will go down with him.”

Falun Gong practitioners all over the world are protesting, calling for the Chinese government to issue Mr. Wang a passport and allow him to join his daughter in the U.S.

“Sweden: Rally at Chinese Consulate in Gothenburg to Protest Wang Zhiwen Being Barred from Leaving China”