(Minghui.org) Falun Gong practitioners throughout the world have been tirelessly raising awareness about the Chinese regime's brutal 17-year persecution of Falun Gong, a spiritual practice based on the principles of Truthfulness, Compassion, and Forbearance. Of particular focus has been the regime's crime of forced organ harvesting of prisoners of conscience, the majority of whom are Falun Gong practitioners.

Practitioners' constant efforts to expose the persecution have borne fruit, generating support from elected officials on both sides of the Atlantic. The U.S. House of Representatives passed Resolution 343 on June 13, 2016 condemning the forced organ harvesting committed by the Chinese Communist regime, and more than half the members of the European Parliament signed a written declaration to call for an end to this atrocity.

In the Southern Hemisphere, Falun Gong practitioners in Sydney, Australia and Aukland, New Zealand have been a prominent presence in these cities' major business districts since the latter half of 2012, raising awareness about the persecution in China. Many local citizens have shown their support for Falun Gong, recently taking part in large-scale signature campaigns to petition their governments to take a stand against China's human rights abuses. 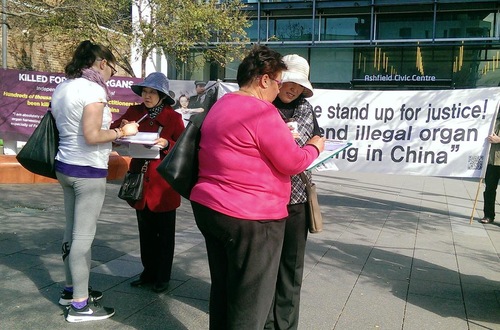 Signing a petition in Sydney to call for an end to the Chinese regime's forced organ harvesting crimes. 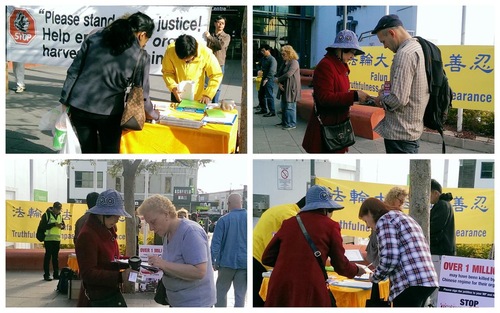 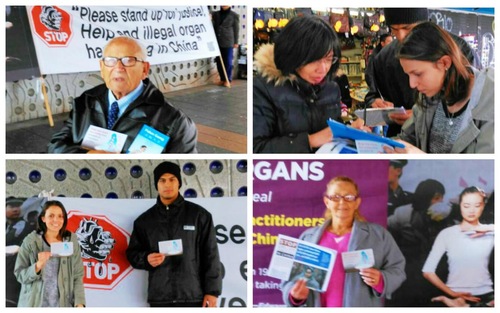 Australian citizens sign postcards to their MPs to urge the Australian government to take action to stop the forced organ harvesting atrocities in China.

In major business districts, practitioners handed out flyers and set up display boards outlining evidence of the Chinese regime's organ harvesting crimes. Recent investigation suggests that over one million organ transplants have been conducted in China over the past several years, sourced from prisoners of conscience.

People were shocked to learn that this is a state-sanctioned crime and that the military is involved. Many signed postcards urging their local Members of Parliament to take action against the atrocities. A number of people asked for additional postcards so that their family members and friends could also join the ranks of supporters.

Ms. Malanie Fuhrman, who lives in the Parramatta District, condemned the atrocity and said that everyone should stand up and call for an end to these crimes. Ms. Fuhrman believes that this matter is closely related to the community and the conscience of humanity.

Grace, resident of the Ashfield District, said that the forced organ harvesting should never have happened. She said that she cried the first time she heard of this, as she knows that people who practice Falun Gong are good people who peacefully do the exercises and meditation. She encouraged practitioners to expose the crime to the media.

On August 6, Falun Gong practitioners in Auckland held a torture reenactment in Newmarket Park, the busiest commercial district of Auckland, to draw attention to the organ harvesting crimes taking place in China.

Many people expressed their support and signed the petition calling for its end. 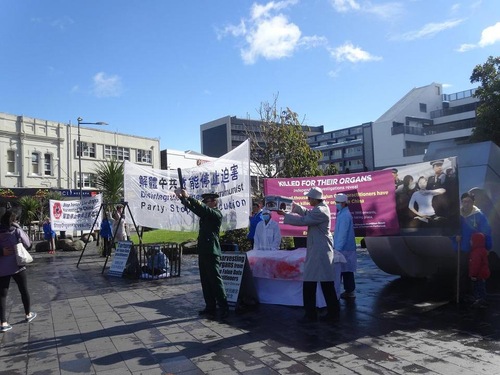 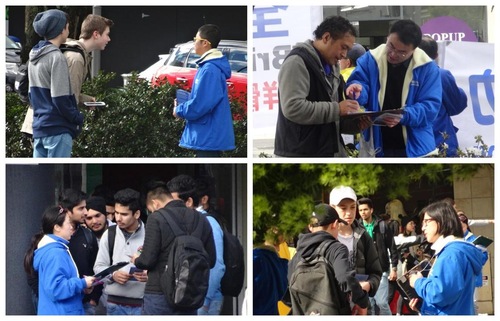 Many people signed the petition calling for an end to the persecution in China.

Emilio, who studies at Auckland University of Technology, suggested that practitioners go to more communities and help people learn about these atrocities. He said that the practitioners' efforts will definitely play an active role in stopping the crime.

Nicolas, who is a priest, signed the petition after he heard of the forced organ harvesting of prisoners of conscience. He said, “It's just too wrong and inhuman.” Nicolas commended practitioners' peaceful resistance and said that he would tell his parishioners about this brutality of the Chinese regime.

Shelly and her family of four signed the petition. She said that she appreciated the opportunity to help end these egregious human rights abuses.