Minghui Summer Camp in the South of France

(Minghui.org) While video games and other addictive cell phone and tablet apps have overwhelmed young people and troubled educators, this is certainly not a concern for the parents of the young Falun Gong practitioners who attended the annual Minghui summer camp in Mane, Haute-Garonne, in the South of France. 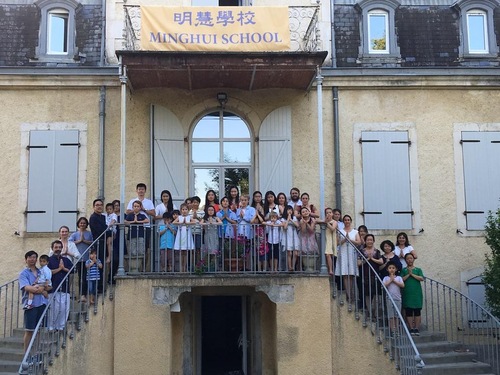 Young Falun Gong practitioners and their parents at the Minghui summer camp in Mane, Haute-Garonne

Forty young practitioners and their parents from France and nearby countries attended the summer camp. Various age groups, ranging from 3 to 18, enjoyed rich and fun activities. The older kids read Zhuan Falun (the main book of Falun Gong), and the younger kids read the poems by Master Li Hongzhi (the founder of Falun Gong). All of them did the exercises and meditation together every day. Some kids also learned traditional Chinese dance.

At the end of the 10-day camp, the young practitioners held a cultivation experience sharing conference. Nearly all of the kids talked about how they got rid of the attachment to cell phones and tablet games. 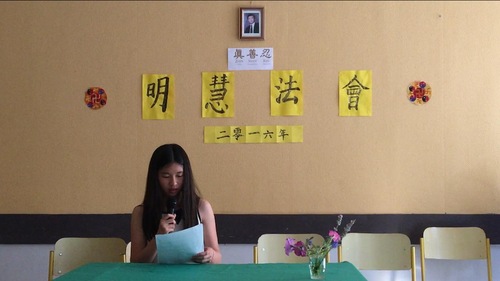 A young practitioner gives a speech at the experience sharing conference.

Thirteen-year-old Gael said in his talk, “Many things hinder our cultivation, such as laziness, the pursuit of comfort, and greediness. Here, I would like to talk about one of them— the cell phone.”

The youngster had received a smart phone on his last birthday.

“I was excited and couldn't go anywhere without it. I played with it all the time. At school, kids talk about cell phone stuff. I was heavily influenced by that, and very much indulged it.

“However, cultivating Falun Gong made me realize that this is a strong attachment. It is an addiction, wasting my time and somewhat polluting my mind. So, I deleted all the games on the phone.

“I also reduced the time I spent time surfing the internet. But after a while, the urge to get on the internet hit me, and I was addicted to it again. So, my parents took away the phone. But I must say 'thank you' to them. They have helped me quit the attachment to internet surfing. Thank you, Dad; thank you, Mom.”

To 9-year-old Josephine, video games were also a huge temptation. But when she realized that many bad thoughts emerged from those games, and the attachment could get out of control, she decided to quit. “I no longer ask Mom to let me use her phone to play games,” she said.

The campers also held an activity in nearby Toulouse and Saint Girons. Wearing T-shirts with the Chinese characters for “Truthfulness-Compassion-Forbearance,” the children passed out Falun Gong flyers and hand-made paper lotus flowers to passersby. They also collected signatures on a petition calling for an end to the brutal persecution of Falun Gong in China.

On the last day of the camp, the young practitioners held a talent show. The younger ones sang songs composed by practitioners, and recited Master Li's poems that they'd learned at the camp. The older kids gave exquisite dance performances.

Aline, a mother of five, thanked the camp organizers for providing such a wonderful experience and an environment to purify children's mind and spirit.

“Rizhao, Shandong Province: 11 Arrested in One Day and Given Up to 15 Days of Detention”

“From Vancouver to Toronto, Practitioners Bring the Harmony of Falun Dafa to Nearby Communities”