By a Falun Gong practitioner in Winnipeg

(Minghui.org) Winnipeg practitioners held their first Falun Dafa Experience-Sharing Conference on July 10, 2016. Thirteen practitioners shared experiences in cultivating the heart and mind through the practice and insights gained in the process.

As the capital of Manitoba, one of the three prairie provinces in central Canada, Winnipeg is known as the “Gateway to the West” and is the eighth largest city in the nation. 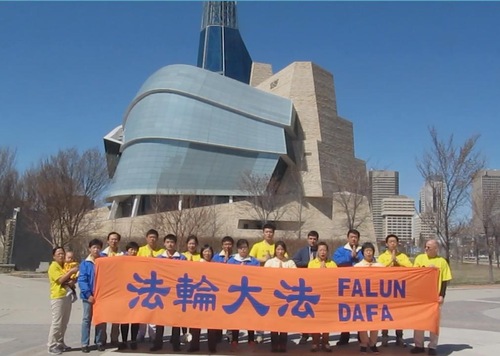 David used to be an alcoholic, addicted to video games, and was sometimes on drugs. He tried various religions searching for a solution, but nothing changed, and he only felt more lost.

It was in 2014 that he began to read Zhuan Falun, the main teachings of Falun Dafa. The spiritual principles in the book enabled him to overcome his problems.

“In the past, I knew I had many bad habits, but I was unable to get rid of them,” he said. “Falun Dafa is extraordinary. It brought me new understandings about life, the world, and universe.”

With a new outlook, David found life more meaningful and productive. “I have walked a long way to find such a righteous path and I will never give it up,” he said.

Jonathan first heard about Falun Dafa when he was very young. But didn’t immediately begin to practice.

“The situation got worse after that. I became more and more attached to everyday society and I almost totally forgot about Falun Dafa,” he recalled.

But Master Li (the founder) did not give up on him and gave him hints through some incidents. Those experiences made Jonathan realize that the only path forward is to follow the principles of Truthfulness-Compassion-Tolerance and become a better person.

“Looking back on my experience, I came to understand that Master Li has been looking after me all the time. I will work hard to improve myself according to Falun Dafa's principles and be a genuine practitioner,” he said.

“Because of the hate propaganda from the communist party in China, many people became hostile towards Falun Dafa. I really feel bad for them,” said Julie.

As a result, she often goes to tourist sites and talks with Chinese tourists, telling them about Falun Dafa, answering their questions and clearing up their misconceptions.

One day in a dream, she saw she and another practitioner on a ship were saving people out of the ocean. “What we were doing was important and so urgent, and I will never forget the vivid scene,” she said.

“Delhi, India: The Times of India Reports on Falun Dafa”