(Minghui.org) A Falun Gong information booth and signature drive at Kornhaus Plaza in downtown Bern introduced the practice to local residents and foreign visitors, and raised awareness of the forced organ harvesting crimes in China. 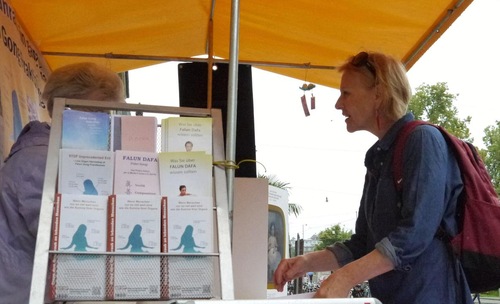 The lady asked, “What can I do to help stop the persecution?” 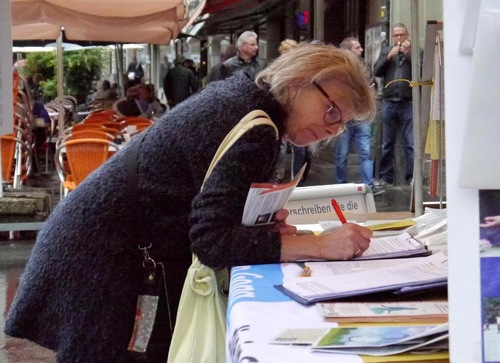 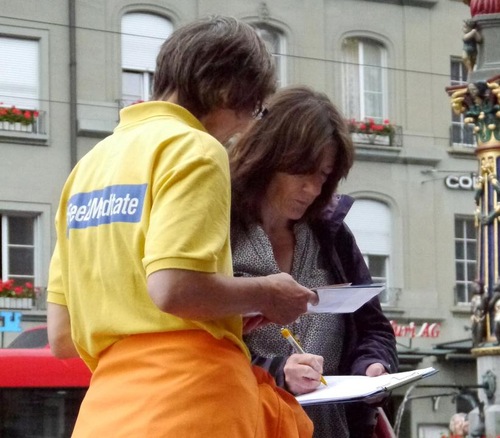 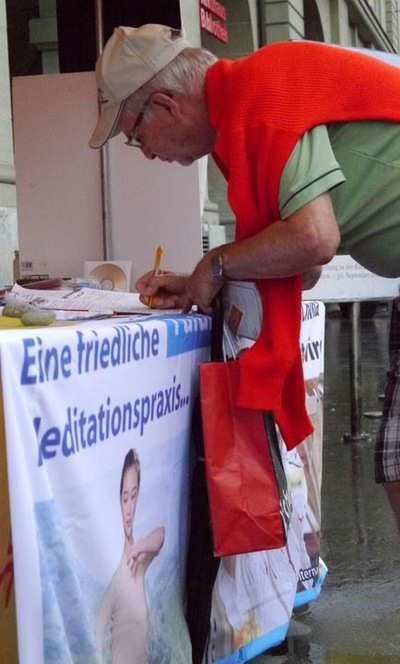 Many passersby were hearing about Falun Gong and the persecution in China for the first time. College student Ina-Maria expressed hope that the United Nations could intervene by pressuring the Chinese government to stop the forced organ harvesting.

She said, “It is important to let the world be aware of the human rights situation in China. There is nothing more evil than forcibly harvesting human organs.”

Claudia, a special education worker who signed the petition along with her daughter, said, “I despise the persecution of any humankind, so I want to sign the petition.”

Barbara signed the petition and returned with her son a short time later to let him sign it too. Upon leaving again, she asked for a blank signature form and a return address to submit signatures she collected from friends and family.

A high school teacher took some fliers and blank petition forms for her students. She said that young people were spending too much time on their smart phones and tablets, and cared little about social reality. She planned to have the students read the fliers and research the human rights situation in China.

Felix, a Mexican engineer working in Switzerland, said that the signature drive was a good way of letting people know about the happenings in China, and helping stop the persecution.

Mr. Lu, a Taiwan tourist, signed his name and commented, “The Communist Party is doing a terrible thing! How can you trade human organs?!”

Silvia signed and said she had learned about the persecution of Falun Gong a few years back, but was shocked upon hearing about the forced organ harvesting from living Falun Gong practitioners.

She understood that the Chinese Communist Party tortured the practitioners and wished her signature could help them in some way.

She said, “A signature drive is an important way (to raise awareness), because many people know little about the persecution and organ harvesting.”

Ms. Kopp, a local resident, said, “Obviously, this (organ harvesting) should not exist at all. I don't understand why it can happen in this world. How can we allow it to happen?”