(Minghui.org) Falun Gong practitioners in Kumamoto, Japan collected signatures calling to prosecute Jiang Zemin, the former Communist Party leader who initiated the brutal persecution of Falun Gong in China. The practitioners have gone to Fukuoka, 100 kilometers (62 miles) from Kumamoto, to collect signatures every day since March.

Fukuoka is located in north Kyushu, Japan with a population of 1.5 million. It is the biggest city in Kyushu region. The signature drive was conducted in a shopping area and featured eye-catching posters with information about Falun Gong and the persecution in China. Over 30,000 people in Fukuoka signed the petition within two months. 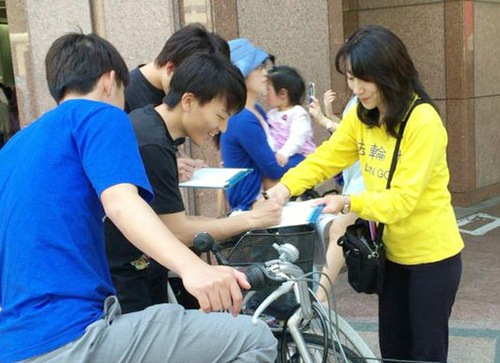 Passersby sign a petition to support the prosecution of Chinese leader Jiang Zemin.

A middle-aged couple signed the petition in late March. The husband said to a practitioner, “We came here just to sign the petition. Why is there such inhumane persecution in the world? It's beyond imagination. We promote animal protection, because many people hurt animals, which we cannot tolerate. Live organ harvesting is not a human act. We have a responsibility to stop it!”

Persecution 'Too Brutal to Tolerate'

One Japanese woman said after reading the informational materials, “I've signed the petition before. I saw you in another city last year. It was cold then. You've collected signatures during the past half year. I admire you. I will not decline even if I'm asked to sign a hundred times, because this persecution is too brutal to tolerate.”

The woman took several pieces of literature and said, “I'll take it to people I know and ask them to come to sign when they have a chance.”

In March, a dozen high school students passed by and asked for Falun Gong informational materials. One said to his classmates, “Such brutal persecution cannot be ignored. We all have to sign the petition.” After they did, the boy said to a practitioner, “You work hard. Way to go! We support you!”

There were also Chinese people working or touring in the city. One day, a young man passed by and yelled at the practitioners, “You're defaming China. You come here to do things that hurt our country.”

A practitioner replied, “You are kind, since your words reflect your patriotism for our country. But you have to make a choice after learning the truth.” The practitioner talked with the young man about how people all over the world practice Falun Gong, the brutal persecution by the communist regime, the Tiananmen Square self-immolation hoax, and the Chinese regime's killing of prisoners of conscience to harvest their organs.

Shocked, the young man said, “Is this true? I thought what  the government said was right. Now I have answers to many questions I had. I'm touched by your kindness. I have no reason to refuse the truth. I want to use my true name to sign the petition against Jiang Zemin. I will quit the Party.”

“Practitioner Han Changgen Arrested in Tangshan, In Poor Health Due to Detention”