(Minghui.org) Politiken, a leading Danish daily newspaper, carried a report titled, “China tried to stop performance in Aarhus” (Kina forsøgte at stoppe forestilling i Aarhus) on May 26, 2016. The report exposed a letter sent by the Chinese embassy to the concert hall in an attempt to block the scheduled performance of Shen Yun Performing Arts in Aarhus, Denmark. 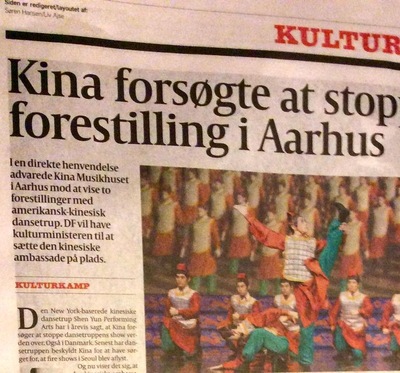 The Chinese embassy warned the concert hall to stay away from Shen Yun, and defamed the arts group. The letter alleged that the performance is “trying to 'undermine' relations between China and Denmark.”

The embassy “crossed the line,” said Alex Arendtsen, spokesman for the culture department of the Danish People's Party.

The report continued, “And he will ask Culture Minister Bertel Haarder to emphasize to the embassy, 'They have the right to say what they think. But they cannot tell the Danes what to say yes to. To this kind of thing, we must clearly say no, because this is the way dictatorships operate,' he said to Politiken.”

The concert hall ignored the embassy's request. Its director Jan Christensen said, “We assessed the artistic content of the show as sufficiently high that we would rent to them. There is freedom of speech in Denmark, and we intend to comply, so we assessed very, very quickly that we could not take care of the request [from the embassy].”

Christensen said to the reporter of Politiken that the two shows in the concert hall were almost sold out. Nearly 3,000 people had bought tickets.

The report stated, “Shen Yun Performing Arts is touring across the globe and has appeared on many big stages. The company says that through music and dance [it] portrays ancient legends, heavenly kingdoms, and modern heroic tales that takes the audience on a journey through China's 5,000-year cultural history.” 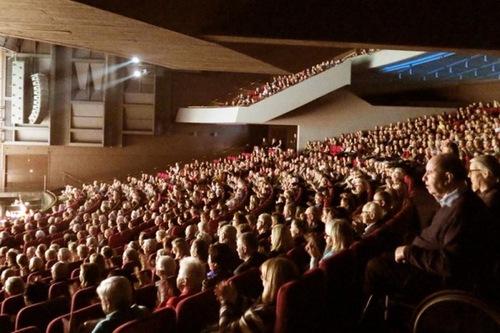 A performance by Shen Yun Performing Arts in Aarhus, Denmark in April 2016.

Television producer husband-wife duo Ms. Thera Hoeymans, a journalist and TV host, and Mr. Jorgen Vang, a videographer and film producer, said that China has 5,000 years of civilization, and that they saw it brought to life in Shen Yun Performing Arts. The couple said they saw absolute beauty at the performance at Aarhus on April 12.

“The very lightness, and the elegance and the music and the body expression, made me feel like everything was very… It seems like everything was so light and joyful, and very emotional, very spiritual, and you got the feeling that you were lifted up by the universe,” Ms. Hoeymans said. She said that she felt this from the depth and beauty she saw in each and every performance.

“I feel a peace. I do. I’ve had a lovely experience, and I feel lifted of something, yes,” she said.

Mayor Uffe Jensen from Odder, a smaller city about 12 miles from Aarhus, watched the show on April 12. He said he had never seen a performance like this one. He found the orchestra, blending traditional Western and Eastern instruments, amazing, even superb, and was excited to see dances telling of traditional Chinese stories and legends.

That Denmark welcomed the dance company is not in doubt. The two performances were sold out, and the audience was very warm, giving standing ovations and three curtain calls.