(Minghui.org) 1,516 Qingdao City citizens in Shandong Province have signed criminal complaints against the former Chinese dictator, Jiang Zemin, who launched the ongoing and brutal persecution of Falun Gong in 1999.

This effort resulted from local Falun Gong practitioners persistently educating the citizens of that area about Falun Gong and the ongoing persecution. 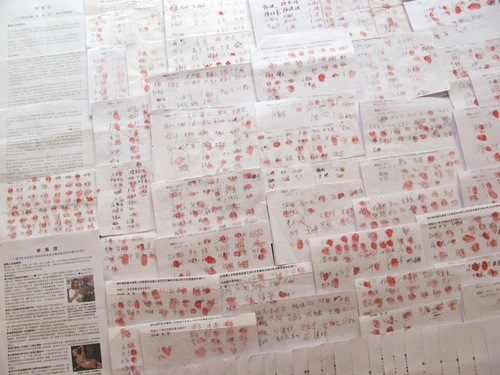 The full report against Jiang Zemin was sent to the Supreme People's Procuratorate. The complaints accuse him of depriving the Chinese people of freedom of belief and committing genocide against practitioners of Falun Gong.

The main theme throughout the complaints is the call for an investigation by the authorities into the crimes of organ harvesting from living Falun Gong practitioners, committed by Jiang Zemin and his allies.

Speaking Out Against a Corrupt Ruler

A man who manages a group of laborers was told that Jiang Zemin had persecuted many innocent people during his term in office and was instrumental in the murder of practitioners for their organs.

He said, “It is beyond evil. It is not enough that 200,000 people have filed legal complaints against Jiang, I think that 200 million should sue him. I want to be included in the list of people who sue him.” He signed the forms. He also applied his fingerprints, which is a means of verifying signatures in China.

A practitioner talked to father and son, a vegetable merchant team, about Falun Gong and the persecution.

The practitioner asked, “About 200,000 people have filed criminal complaints against Jiang Zemin. Do you want to report him also?"

“Jiang has done so many terrible things,” said the father. “People should have sued him a long time ago.” Both father and son signed the forms.

An elderly couple in their 60s listened when a practitioner explained the facts about the persecution.

The wife said, “Jiang Zemin is truly corrupt. He should have been imprisoned a long time ago.” Both signed and put their fingerprints on the form.

“Nine Commentaries: “Like Handing out Candies – Everyone Wants Them””

“Brisbane, Australia: “You Are Doing a Wonderful Job!””