Jiang and his regime began persecuting Falun Gong in 1999, targeting millions of practitioners and their families in China.

Mr. He Wei has been repeatedly persecuted in the past 16 years. He was put in a forced labor camp and constantly beaten, brainwashed, forced to do hard labor and tortured with various means.

His mother is also a practitioner, whose bronchial asthma healed after her practice. The local police frequently harassed her since 1999 for her beliefs.

Mr. He's father witnessed the dramatic improvement in his mother's health and became a supporter of Falun Gong, though he never practiced. He died of a brain hemorrhage two months before the persecution started.

Those who were deceived by the regime's smear campaign against Falun Gong became hostile toward Mr. He and his family. They believed that his father died from practicing Falun Gong, which he never did.

The hostility from their neighbors and acquaintances put Mr. He and his family under severe pressure. His sister, who wasn't a practitioner, became severely depressed and shut herself off from people, denying any connection with Falun Gong.

The following are excerpts from Mr. He's criminal complaints against Jiang.

Became Healthier and a Good Employee after the Practice

I became a practitioner in 1997 before I graduated from college. I have become, quite literally, illness-free since the practice.

I worked in a company in Hebei from 1997 to 2001, during which I followed Falun Gong's teachings and was known for being hard-working and honest. My superiors and co-workers relied on me and trusted me with important things. I was promoted to deputy chief of staff.

I was taken away by the authorities and sent to Chongqing in 2008; fortunately, the general manager of the company I was working for at the time bailed me out. He told me, “If a good man like you could get arrested, there is no hope for society.”

Forced to Quit My Job

After the persecution started, the police in Chengde City frequently harassed me and called my employer to make sure that I stopped practice Falun Gong. I was distributing Falun Gong literature in 2001 when someone reported me to local security. The community security went to my employer, threatening to get the police involved. Not wanting to cause my company any problems, I had no choice but to quit the job.

Tortured under Police Custody in Beijing

I went to Beijing to protest against the persecution in 2001. The police in Beijing arrested me for carrying Zhuan Falun, the book of Falun Gong's main teachings. They beat me and chained me to the ground, and forced me to stay in a painfully strained position for a long time. 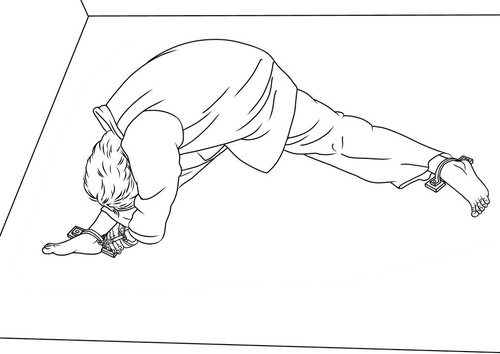 Chained to the ground: A practitioner sits with two legs wide apart and is shackled to two metal rings immobilized in the ground. Both of his hands are cuffed to one of the rings on the ground, forcing him to stay in a bent-over position that strains his back, shoulders and legs.

Two days later I was transferred to the Sichuan Office in Beijing. In order to extract my real name, work and home address, the police force-fed me with nerve-damaging drugs. I was beaten, humiliated, and cuffed to a tree in sub-zero temperatures. I managed to escape while the police were away.

Tortured in a Forced Labor Camp for Two Years

I stayed with a couple of practitioners in Chengde, Hebei. The police broke into the house in November 2001 when I was not home. They confiscated my belongings, including my personal ID and diploma. The ID and diploma were never returned to me, which kept me from finding a job. I was arrested a month later.

The police put an 18-pound shackle on me and beat me during the interrogation. I then went on a hunger strike for 38 days.

My mother traveled for about 900 miles from Sichuan to Hebei to see me, only to have the police extort 10,000 yuan (US$1,660) from her. I was detained for ten months and transferred to Hehuakeng Forced Labor Camp in Tangshan City.

Besides constant beatings and brainwashing in the camp, Mr. He was also tortured with the tactic of “sitting on a small stool.” He was forced to sit still on an 8-inch tall, palm-sized stool for a dozen hours each day. His buttocks festered and his flesh stuck to his pants.

He was also put in a “Dead Man's Bed” with his limbs tied to the four corners of the bed and heavy objects placed atop his torso. He had to do sweatshop work and make disposable chopsticks without getting paid. He was released in November 2003.

Pressured by the Police to Turn in Other Practitioners

The police arrested me in April 2008, believing that I had overseas connections. They had monitored me for over six months prior to the arrest, after they intercepted a parcel for me from a practitioner in Taiwan. They deprived me of sleep during the interrogation and tried to force me to become an agent to monitor other practitioners for them. I refused. Later my employer bailed me out.

While I was on bail, the police repeatedly interrogated me, trying to intimidate me into becoming their agent. I never agreed to their demands.

A few months before the Beijing Olympics in 2008, the police told me several times not to go to Beijing or do anything to “disturb social stability.” They tried to intimidate me and make sure that I didn’t go protest in Beijing during the Games.

The local police also demanded that I move my household registry elsewhere so that their duty to monitor and arrest Falun Gong practitioners could be lessened.

“Shanghai Woman Tied Up for 16 Days Straight during Detention”