(Minghui.org) Today's news from China includes incidents of persecution that took place in 20 cities or counties in 10 provinces. According to this report, 6 Falun Gong practitioners were subjected to mistreatment during their detention, and at least 39 practitioners were illegally arrested. 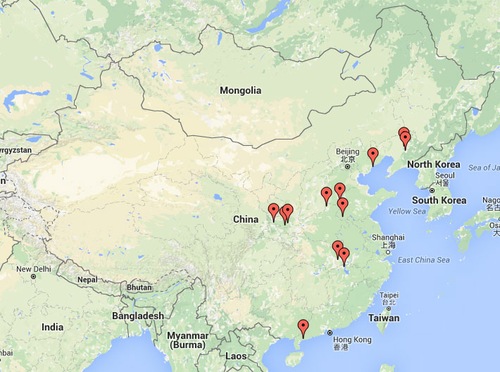 Mr. Wu Zhiqi was sentenced to three years and three months in prison by the Dianbai District Court on the morning of April 28, 2016. Mr. Wu plans to appeal.

Mr. Wei Zhenqun, from Chenxiang Town, Sujiatun District, was arrested by officers from the Yaoqian Town Police Station on October 7, 2015 for suing Jiang Zemin and distributing Falun Gong informational materials. He was held in the Sujiatun District Detention Center. On April 21, 2016, the Sujiatun District Court held a trial against Mr. Wei without notifying his family and sentenced him to three years in prison.

Ms. Wu Lijuan was arrested by officers from the Domestic Security Division when she talked to people about Falun Gong on the morning of April 22, 2016. She was detained for 15 days in the Xinming Police Station in Mingshan District. Her home was ransacked, and she has since been taken to the Caibei Detention Center in Benxi City.

Mr. Hou Xinlu from Goujialing Village was arrested by officers from Gaojia Town in the Weibin District on April 27, 2016.

Ms. Pi Yingchun was arrested at her apartment in Dongjiao District on April 18, 2016. The police also ransacked the dwelling.

Ms. Chen Yuxia from Funing District was arrested by plainclothes officers when distributing Falun Gong informational materials on April 25, 2016. She was later released. Mr. Wang Yong was arrested on April 27 for hanging Falun Gong banners. His home was also ransacked.

Ms. Sun Shilian was arrested by officers from the Changhong Police Station in Lushan District on the morning of April 20, 2016. She is being held in the Jiujiang City Detention Center.

On the same day, Ms. Li Yanzhen and Ms. Xiao were arrested by officers from the Pengze Police Department. Both practitioners are being held in the Pengze Detention Center.

Mr. Chen Tingxiang, Ms. Yao Yulan, Ms. Du Yumei, and Ms. Xing Xiuhua were arrested by officers from the Guan County Police Department, the Qingshui Town Police Station, and the Beiguantao Town Police Station on April 26, 2016. Mr. Chen is being held in the Guan County Detention Center. The other three practitioners were taken to the Linqing Detention Center. Ms. Chen Xiufang was released for failing the physical examination.

Mr. Lei Chengsuo from Donggang Town was arrested by police on April 27, 2016 for suing Jiang Zemin. His home was also ransacked.

Ms. Shan Xianzhi was arrested by officers from the Chengwu County Domestic Security Division and the Shengli Police Station in Dongying City on March 30, 2016 for suing Jiang Zemin. She is being held in the Chengwu Detention Center.

It is unclear where they are being held.

Ms. Huang Xiuhuan was arrested on November 14, 2014 for talking to people about Falun Gong and sentenced to a three-year prison term in August 2015.

When her family visited her on April 25 this year, they were shocked to see this once healthy woman now reduced to skin and bones. Ms. Huang's back was hunched and her hands were shaking uncontrollably. She told her family that the guards confiscated all the money and clothes they sent her.

Mr. Fang Qingchang was reduced to skin and bones after just six months of imprisonment for practicing Falun Gong.

His wife Ms. Wang Jinhua visited him on April 25 this year and was saddened to see him look nothing like the once healthy and strong husband she knew.

Mr. Fang was arrested in November 2014 and sentenced to five years last October. He told his wife that he was forced to do hard labor without pay every day and was constantly pressured to renounce his faith.

At least seven local practitioners are known to have been arrested between March and April this year.

Ms. Tang Zhongbi, 55, was arrested on March 17. Her whereabouts remain unknown. Her husband is currently threatening to divorce her.

A married couple surnamed Yang was arrested while taking a train to visit their hometown in Sichuan Province. When interrogated by police, they disclosed the names of a few practitioners with whom they worked with to produce materials exposing the persecution of Falun Gong. As a result, several more people were arrested, and their homes were ransacked.

Ms. Li Longhui, nearly 70, was arrested on March 27. Her husband was released one day later, but she remains detained.

Mr. Zhou Shaohua is also in detention, while his wife was released within a few days after their arrest.

Ms. Ding Yinglan, 60, was arrested on April 10. The police have denied her family visits. Her daughter received a formal arrest warrant for Ms. Ding on April 22. The police have threatened to sentence Ms. Ding to a three-year prison term.

Ms. Yang Xiaofeng from Pinggu District was arrested on December 6, 2015 for distributing informational materials about Falun Gong. She has been detained in the Tongzhou District Detention Center for more than four months. It was said that her case has been submitted to the Pinggu Court by the Pinggu Procuratorate with fabricated “evidence”.

When her lawyer met her on December 23, 2015 he learned that Ms. Yang had been repeatedly slapped and had cold water poured over her by detainees

The Chaoyang District Court sentenced Ms. Zhang Xiaoling and Ms. Li Yifeng to three years’ imprisonment without due cause on April 22, 2016.

The two practitioners had previously been detained in forced labor camps for two years because of their belief.

Ms. Li Xing, an art teacher at the No. 2 High School, was tried by the Fengcheng Court on March 31, 2016. Her lawyer, Wang Guangqi, from Beijing entered a not guilty plea. The lawyer stated that it is legal for Falun Gong practitioners to uphold their belief. He also advised the personnel from the public security organs to treat Falun Gong practitioners fairly. About 60 people attended the trial.

The Fushun County Court tried Ms. Xu Guiqin on the morning of April 14, 2016. More than 10 of her family members and friends attended the session.

During the trial, Ms. Xu defended herself and stated the benefits she obtained from practicing Falun Gong. She also said that Falun Gong has been well received in many countries throughout the world. Judge Wei interrupted her statement.

The trial lasted more than one hour. The judge announced an adjournment and there was no sentence.