(Minghui.org) Since May 2015, more than 200,000 Falun Gong practitioners have exercised their legal rights to seek justice against former dictator Jiang Zemin for persecuting Falun Gong and causing them tremendous suffering over the past 16 years.

It has been learned that 1,529 more people from two cities in China have signed petitions, and they include 400 residents from Tongcheng County, Hubei Province and 1,129 from Guangzhou, Guangdong Province. 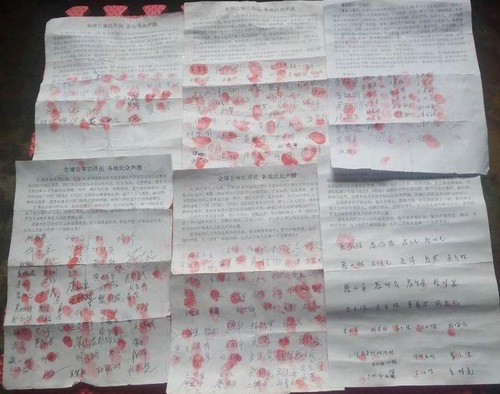 The Guangzhou residents signed their petitions between October 2015 and April 2016. Among them, 219 people mailed the petition to the Supreme People's Court and Supreme People's Procuratorate. The remaining 910 signed it online.

A street cleaner praised the practitioner who told her about Falun Gong. She quit the Chinese Communist Party and signed the petition.

A middle school student said to the practitioner: “I really appreciate your effort!” An elementary student spoke out as well, “We should sue Jiang. My grandmother is a Falun Gong practitioner. She has been terribly wronged by his regime.”

“424 Arrested in China for Practicing Falun Gong in February 2016”

“Respecting Master and the Fa by Treasuring Zhuan Falun”