(Minghui.org) May 13 is the World Falun Dafa Day. On that day in 1992, Falun Dafa (also known as Falun Gong) was brought to the public in Changchun, China by Mr. Li Hongzhi.

Since then, 24 years have passed, and people now practice Falun Dafa in more than one hundred countries. This is because its core principles of Truthfulness-Compassion-Forbearance have benefited millions from all walks of life.

Falun Dafa practitioners from around the world celebrate every year on May 13 and express their appreciation to the founder of Falun Dafa, Mr. Li Hongzhi.

Mr. Wu Junxiang is a silicon optics engineer and a lecturer at the University of San Francisco. Before May 13 arrives, which is also Mr. Li's birthday, he wishes to say for the world to hear, “Thank you, Master Li.” 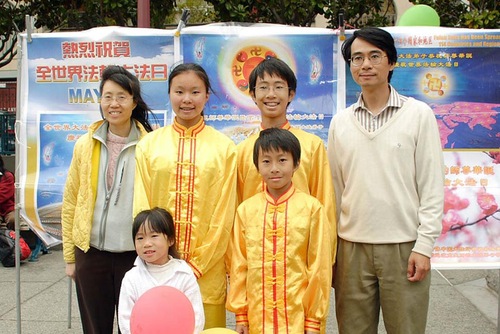 “I began to read Zhuan Falun in March 1999,” said Mr. Wu, referring to the main book of Falun Dafa. “The book told me the true meaning of life and about the universe.”

He continued, “I actually was interested in qigong for some time. That month, I was playing ping pong with a colleague who explained what Falun Dafa was. It caught my interest, and I asked him to lend me a copy of Zhuan Falun. What I read deeply affected me, because it provided me with answers to questions about life. Although I was very busy, I read the book during every spare moment I had.”

After reading for some time, he realized that the chronic pain in his neck and back, caused by a car accident, were rarely bothering him. When he heard that a nine-day Falun Dafa class would be held in his area, he decided to attend it.

“I decided to practice Falun Dafa not just because I benefited physically and mentally, but because I finally understand the meaning of life,” said Mr. Wu.

“Before cultivating, I had many unanswered questions, such as, ‘Where do humans come from? Why have we come here, and where will we go in the future?’ Although I'd read a lot of books from other cultivation practices and religions, I hadn't found any answers. I no longer have to seek answers, as I found them in Zhuan Falun.”

Mr. Wu’s family of six, which includes his wife, two daughters and two sons, with the eldest being over 20 years old, all practice Falun Dafa.

“My neck and back were injured in a car crash in 1996. I couldn't lower my head for more than ten minutes, because it was so painful. I tried as many as six so-called healing methods, which included some types of qigong treatments, but there was no relief for the the pain. Then, I learned Dafa, and the pain soon disappeared.”

Upon seeing the changes in him, his wife also began to learn Falun Dafa. At the time, his eldest daughter and second son were only four and five years old. They watched their parents and copied their movements when they did the Dafa exercises.

“Children who practice Falun Dafa are different,” he said. “Many of their fellow students come down with colds and other illnesses and miss classes. My children have never missed a single class because of illness. They do sometimes feel uncomfortable, but not for long.” 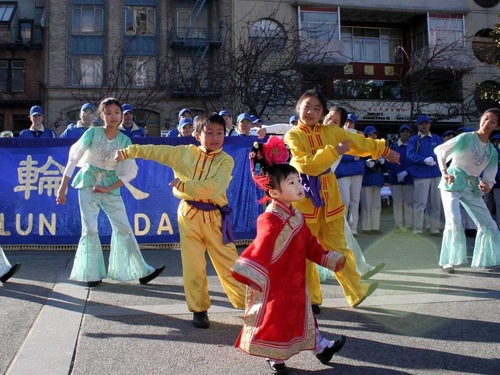 Mr. Wu’s eldest daughter (left rear), his oldest son (left middle) and his youngest daughter (the girl in the red Chinese traditional dress) perform during a celebration in San Francisco on January 14, 2007.

The family also talks to Chinese people to clear up their misunderstandings about Dafa. They can be found at San Francisco's tourist attractions, Chinatown, and other places frequented by the Chinese tourists. 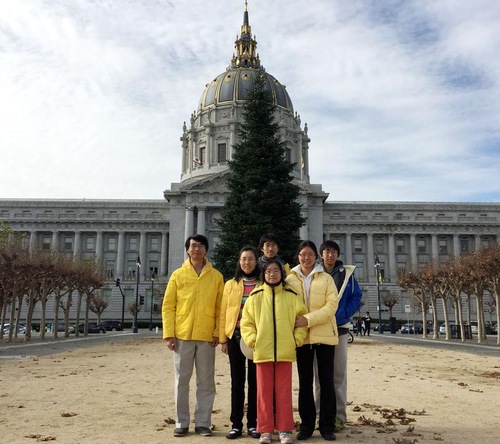 Recent photo of the Wu family outside City Hall in San Francisco.

“Many people have been deceived by the Chinese government's propaganda,” said Mr. Wu. “It is difficult to understand why such a good practice is persecuted. Since my entire family has benefited from the practice, we want to share our knowledge with more people and let them know that they can help end the persecution of Dafa in China.”