(Minghui.org) Today's news from China includes incidents of persecution that took place in 9 cities or counties in 7 provinces. According to this report, 5 Falun Gong practitioners were subjected to mistreatment during their detention, at least 12 were illegally arrested, and the whereabouts of 1 are unknown. 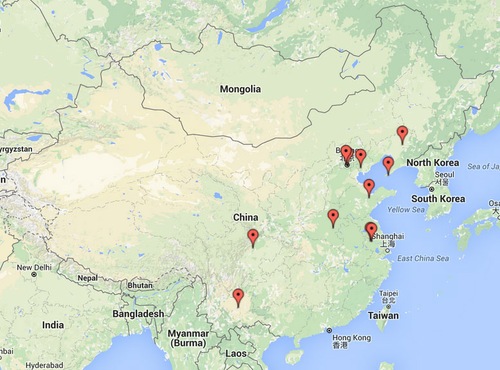 Mr. Liu Tao, Mr. Zhang Jiliang, and Ms. Bai Daiyu were arrested by officers from the Weicheng Police Station for telling people about Falun Gong in Weighing Town in the Youxian District on February 9, 2016. Ms. Bai was released for health reasons. Mr. Liu and Mr. Zhang were held in the Mianyang City Detention Center for 15 days.

Ms. Chen Wenfen was reported to police for distributing Falun Gong informational materials on February 1, 2016. She was arrested and taken to the Donghua Police Station by Panlong District police. She has since returned home.

Ms. Li Yang was arrested on January 25, 2016. Her whereabouts are unknown.

Ms. Liu Cuifen, from Yukou Village, Yukou Town, Pinggu District, was arrested at home on the morning of February 6, 2016, for distributing Falun Gong materials. The police ransacked her home and confiscated calendars and brochures with Falun Gong content. She is still being held at the East Shangzhen Village Detention Center, in Pinggu District.

Ms. Song Xiuqin from Shunyi District was arrested by two employees from the Yixinjiayuan Community Residential Committee, officers from the 610 Office and the police station in Shunyi District. Her home was ransacked, and a computer, printer, cell phone, Falun Gong books, and printed materials were confiscated. She has returned home on bail.

Ms. Shi Yongjun, Ms. Dai Xiuzhi, and Mr. Li Guoliang were arrested on December 31, 2015, by the chief of the Luyi County Police Department, and the director of the Domestic Security Division. They are being detained in the Luyi Detention Center.

Ms. Wang Song from Jurong City was arrested by plainclothes officers on December 14, 2015, and taken to the Jurong City Detention Center. She was secretly sentenced to a five-year prison term on February 7, 2016.

Ms. Chen Xiuping and Ms. Li Junlan were arrested on September 13, 2015. Ms. Chen was sentenced to five years in prison. Ms. Li from Jintan City was sentenced to three years. Both are being held in the Zhenjiang City Detention Center.

Ms. Zhi Haihua and Ms. Wu Limei, from Hezhuangzi Village, Zunhua City, were arrested by officers from the Dangyu Town Government for telling people about Falun Gong in a farmer’s market on January 29, 2016. They were first taken to the Dangyu Police Station, then transferred to the Zunhua Detention Center, where they were held for 15 days.

Ms. Zhi was released after officers extorted 1,200 yuan from her family. Ms. Wu remains in custody.

Mr. Wang Zhaohua is still being held in the Yiyuan County Detention Center.

“More People Around Me are Realizing That Falun Dafa is Good”