Seventeen ministerial-level officials who were actively involved in the persecution of Falun Gong have been indicted for corruption. A typical example is Li Dongsheng, former head of the “610 Office” and Deputy Minister of Public Security.

Appointed deputy head of the 610 Office when the organization was created in 1999, Li was also a deputy director of China Central Television (CCTV). In that role, he was in charge of the communist regime's nationwide propaganda campaign to against Falun Gong to garner public support for its campaign to eradicate the spiritual discipline. In October 2009, Zhou Yongkang appointed him Deputy Minister of Public Security to be in charge of the 610 Office.

On December 20, 2013, Chinese news agencies reported that Li was being investigated for misconduct. On January 12, 2016, Li was sentenced to 15 years in prison. Li gave up the right to appeal in court.

At the provincial level, 84 high-ranking officials who actively carried out the persecution policies have been indicted. These fallen tigers are distributed among all provinces and municipalities directly under the central government, except for Tibet and the Xinjiang Uygur Autonomous Region (Fig. 1). Heilongjiang, with 9 indicted officials, has the most. 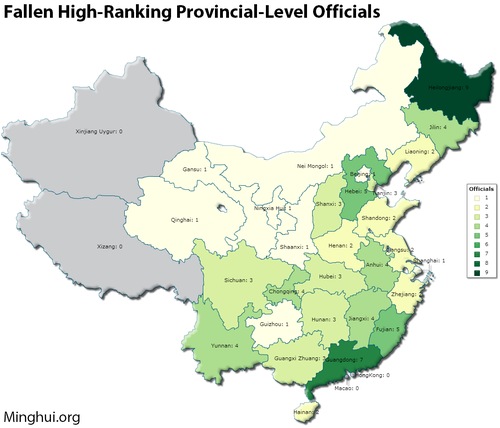 Distribution of fallen high-ranking officials involved in the persecution of Falun Gong.

In one example, Guo Youming, deputy governor of Hubei Province, boosted his career by actively taking part in the persecution. He was sentenced to 15 years in prison for bribery on December 9, 2015.

Guo’s downfall was closely related to his activities while serving as mayor of Yichang, a city in Hubei. In March 2004, Guo published a report in Yichang's state-run newspaper, vowing to take measures against local Falun Gong practitioners.

Practitioners in Yichang have suffered greatly at the hands of the authorities during Guo’s tenure. Data compiled from the city list at least seven deaths among a larger, unknown number of practitioners tortured, injured, disabled, or rendered insane while in custody.

“Improving Myself to Offer Salvation to Sentient Beings”