She was illegally arrested on April 6, 2010, and initially held in a detention center. She then served five years of a seven-year term in the Hohhot Women's Prison before being released on December 6, 2015.

Ms. Zhao was reported to the police for distributing Shen Yun Performing Arts DVDs in the town of Daban. She was arrested on April 6, 2010. Zhang Haitao, head of the Domestic Security Division, ordered the police to take her to the Daban Police Station. He interrogated Ms. Zhao and demanded to know if she had submitted his name to the persecutors' list on the Minghui website. Ms. Zhao told him that what she wrote in the article was true.

More than ten officers dragged her to a police car. Three of them sat on her on the way to the Bairin Right Banner Detention Center. Once there, officers shocked her with electric batons in the hallway before taking her to a cell. 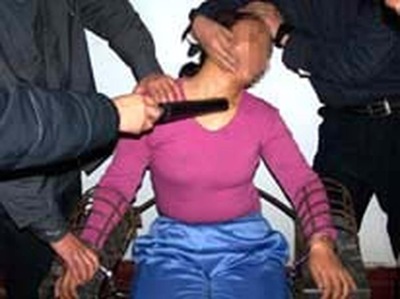 Handfuls of Hair Pulled Out

Zhang Guoli, head of the Bairin Right Banner Detention Center, called Ms. Zhao to his office to interrogate her. Officer Zhang Ying was also present. When Zhang asked her why she was in the detention center, she said that it was because she practiced Falun Gong. Zhang proceeded to berate her and pull out a handful of her hair, which he burned in a garbage can. Ms. Zhao went on a hunger strike to protest her mistreatment and was then force fed.

Zhang Guoli called Ms. Zhao to his office again on April 12. Officers Bai Li and Gao Xuefeng were present. She was told to hold a name plate in front of her chest, while Gao Xuefeng attempted to take her photo. When Ms. Zhao refused to hold up the name plate, Gao got angry, pulled out more of her hair, and burned it in the garbage can. Finally, two officers held her up and her photo was taken.

Zhang Haitao (head of the Domestic Security Division) and a detention center official force-fed Ms Zhao, then injected her with unknown drugs for several days. Zhang ordered inmates to monitor her and threatened that he would deprive them of food if they did not do as they were told.

Zhang Haitao returned to the detention center to interrogate Ms. Zhao on April 26. Because she did not report her name as she was instructed to do, Badama, a guard, berated and slapped her.

Not long after, she felt confused and could not remember anything after a visitor from the Procuratorate left. When she sat up, she found that the white wall looked yellow. Ms. Zhao pulled out the intravenous needle when the inmates in charge were distracted.

Her family hired a defense lawyer from Beijing. However, when the lawyer attempted to visit her in the detention center, the guards would not allow them to meet.

Ms. Zhao was put on trial on June 8, 2010. The police falsely claimed that two bags of Falun Gong informational materials were hers. The lawyer spoke up in her defense, and the prosecutor, Bao Jie, was unable to offer a rebuttal. The presiding judge quickly called for an adjournment.

Several days later, Ms. Zhao was informed that she was sentenced to seven years in prison. She appealed to the intermediate court, but a representative only asked her a few perfunctory questions. She was transferred to the Hohhot Women's Prison on August 23, 2010.

Torture in the Hohhot Women's Prison

In prison, Ms. Zhao was immediately taken to the “strictly controlled group,” where she was forced to watch and read Chinese Communist Party (CCP) propaganda that slandered Falun Gong.

Starting on October 1, Ms. Zhao was forced to stand for long periods without water, while the guards ordered inmates Yu Demei and Gao Hailing to berate and physically assault her.

After October 14, Ms. Zhao was assigned to do forced labor.

Ms. Zhao was reassigned to the “strictly controlled group” on July 6, 2012 for intensive brainwashing. She started to exhibit high blood pressure in early August and was taken to a local hospital. But the staff claimed that there was nothing wrong with her.

Forced labor involved a lot of overtime. This violated the state's prison rules, which set an 8-hour-per-day work limit. The inmates were told to lie to the inspectors, while certain inmates bribed the section head to be exempt from work.

The meals consisted of steamed buns and vegetable soup with few vegetables. When the meal plan called for meat, most of it was bones.

When Ms. Zhao was released on December 6, 2015, she was taken to the Bairin Right Banner 610 Office, where she was asked how she was “transformed” and whether she still practiced Falun Gong. Ms. Zhao told them, “I will only follow the principles of Truthfulness-Compassion-Forbearance and study Master Li's teachings.”

“Tianjin: Over 380 Cases of Arrest or Harassment in Retaliation for Complaints Against Jiang Zemin”