(Minghui.org) The holiday season is also the traveling season. As many Chinese people go on vacation in Europe, Falun Gong practitioners there have held various events to reach out to their fellow Chinese with the facts behind the persecution of Falun Gong. Featured in this newsletter are five recent events to raise awareness in France, Sweden, Denmark, Greece, and Russia.

Meanwhile, practitioners in other parts of the world participate in community events to promote the practice and raise awareness. Included in this newsletter are a Falun Gong group's performance at the International Band Festival in Taiwan, a Falun Gong Art Exhibition in New York, and Falun Gong exercise instruction sessions at two high schools in Indonesia.

Practitioners from Paris come to the Eiffel Tower and shopping malls every weekend to talk with Chinese tourists. 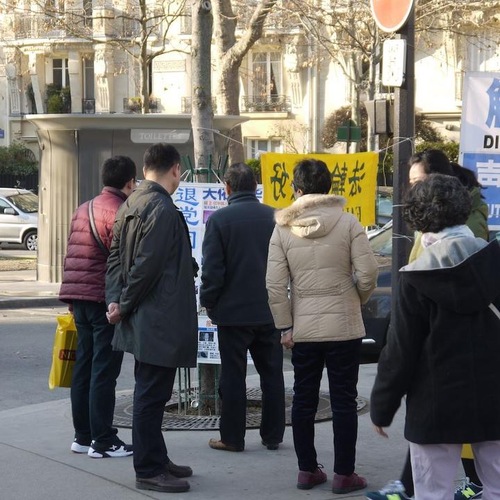 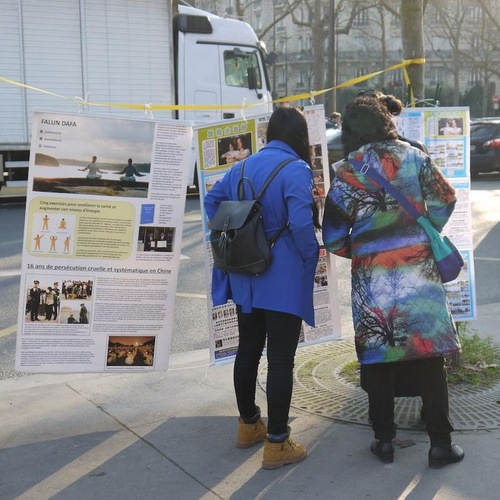 A few days ago, a lady from Sichuan, China, smiled when she saw the practitioners as soon as she got off the tour bus. She circled practitioners' booth, and then told them quietly that she had just started practicing Falun Gong a few weeks prior.

She started practicing after talking to a practitioner from Canada on the phone. She was touched by that practitioner's words, and wanted to know more about this ancient Chinese cultivation practice. So she found a copy of Zhuan Falun, the main book of Falun Gong.

“It is a great teaching,” she said. After finishing the entire book in one sitting, she was amazed and wondered, “Why did the Communist Party ban this?” She wanted to learn the exercises.

She said to the practitioners excitedly, “I truly don't understand why the government suppresses such a good thing. Why won't they let us read the Falun Gong books, and let us judge whether it is good or bad?” Then, answering her own question, she said, “The Communist Party does not have courage. It is afraid of the truth.”

“So, it suppresses the truth, and then spread lies,” she said. “I read your materials. You guys are truly great! What are patriots? You are the real patriots.”

“I want to continue practicing. If there is only one thing I trust, it is Falun Gong,” she said with tears in her eyes.

Practitioners from Stockholm set up display boards and demonstrated exercises at the Mynttorg Plaza. They also collected signatures on a petition speaking out against the state-sanctioned organ harvesting from imprisoned Falun Gong practitioners in China. 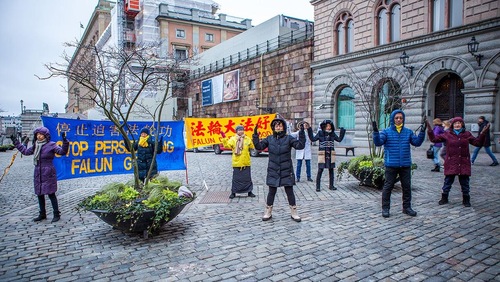 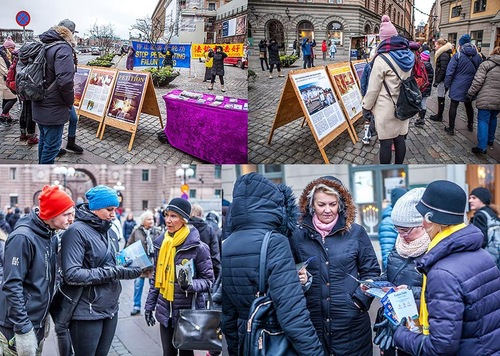 People stop to learn about the persecution 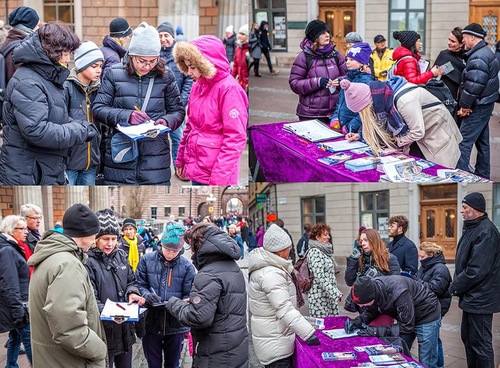 Signing a petition to condemn the persecution

Practitioners from Copenhagen often hold events in the downtown area. On December 17, they hung up banners and passed out flyers, calling for help to stop the persecution. 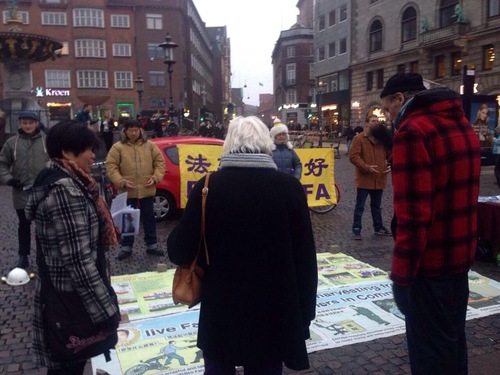 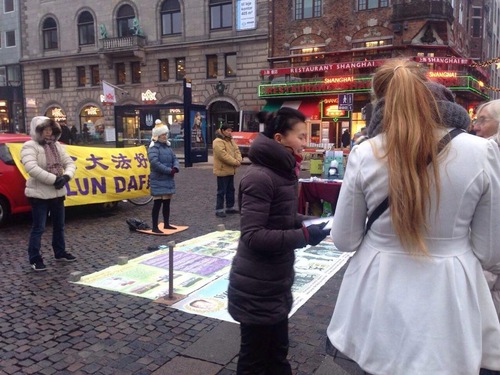 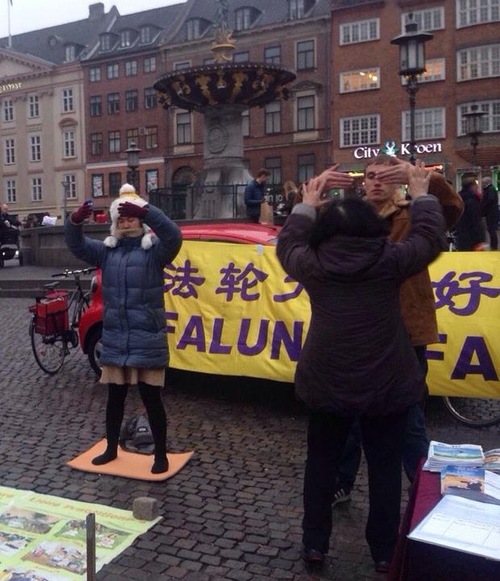 A tourist learns the exercises

On December 9, the day before International Human Rights Day, Greek practitioners held a protest in front of the Chinese embassy in Athens. Many Chinese people coming to the embassy for business took their materials. 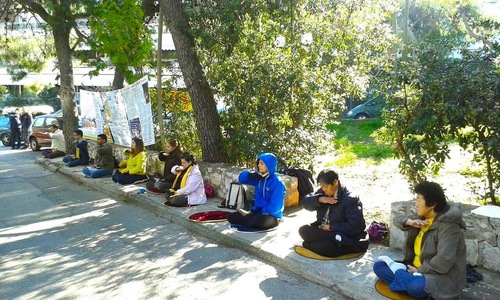 The protest in front of the Chinese embassy in Athens.

On Human Rights Day, December 10, practitioners held an event at the Monastiraki train station, telling people about the organ harvesting atrocities in China. Many people signed petitions. Some of them were also interested in learning the exercises. 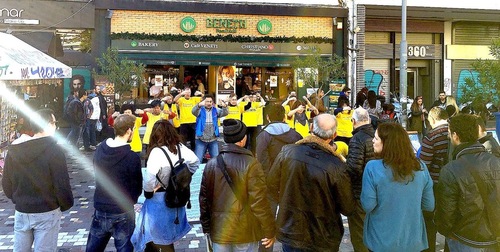 People watch the exercise demonstration at the train station. 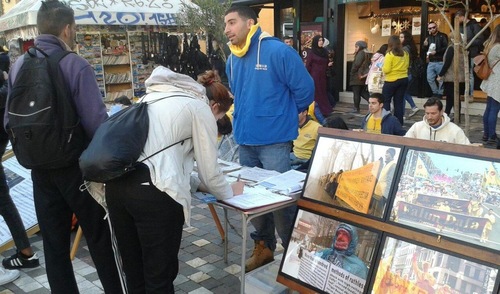 Practitioners from Vladivostok, Russia, held an event on December 4, calling upon local citizens to help stop the persecution. 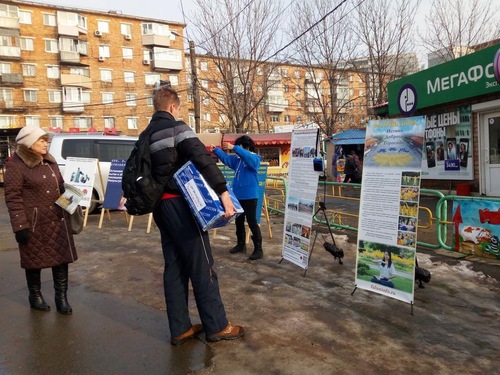 People read about Falun Gong and the persecution. 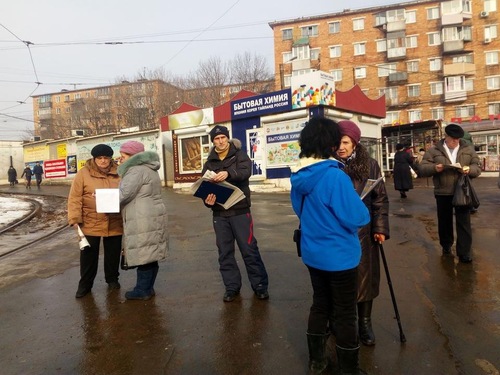 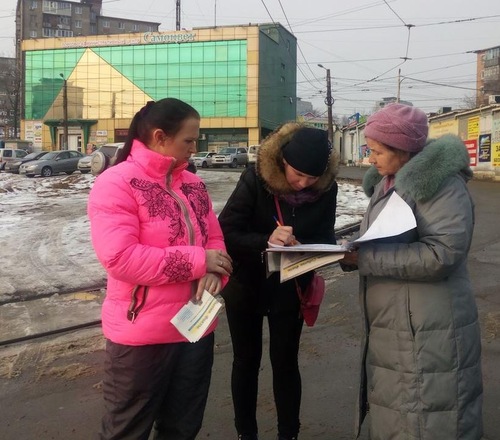 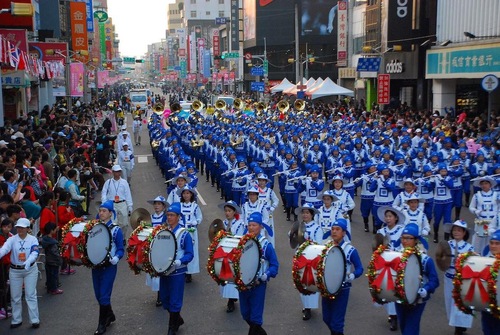 The Tian Guo Marching Band in the parade 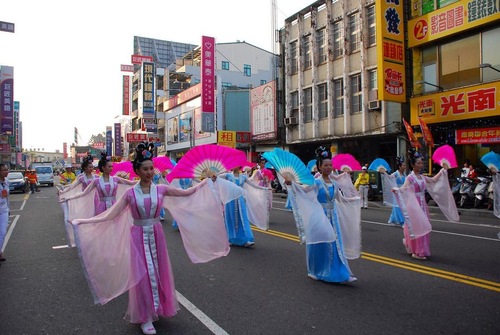 Practitioners dressed up as “celestial maidens,” dancing in the parade. 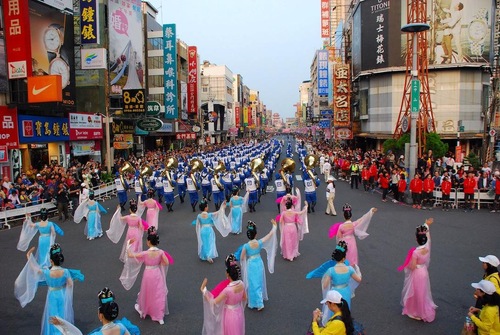 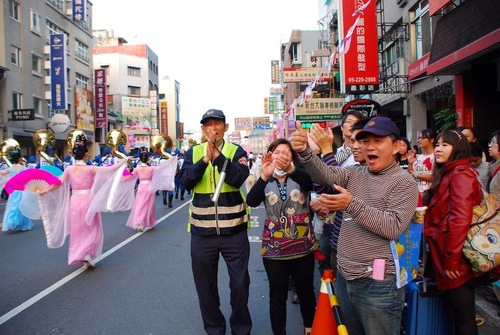 Spectator: “This is the most outstanding group in the parade.” 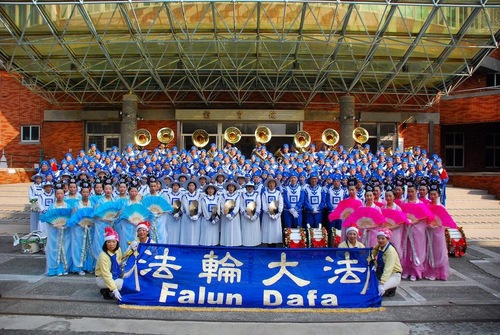 Group photo after the parade

The Art of Zhen, Shan Ren (Truthfulness-Compassion-Forbearance) International Exhibition was held on the campus of State University of New York in Albany on November 28 and 29. Twenty-five paintings depicting the practice of Falun Gong and the persecution in China were put on display. 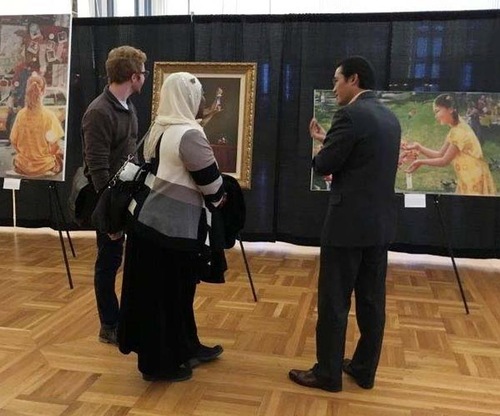 After seeing the artwork, a girl comes back with a friend. She asked practitioners to tell him about Falun Gong and the persecution in China. 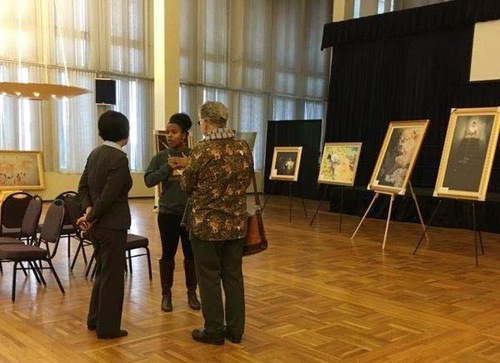 Two viewers talking with a practitioner at the exhibit.

Many guests left comments. One woman wrote in her comments that the paintings are educational, for they depict real atrocities that many people are not aware of.

They held such classes at Kolese Tiara Bangsa school and Batam Seventh High School on November 11 and December 10, respectively. 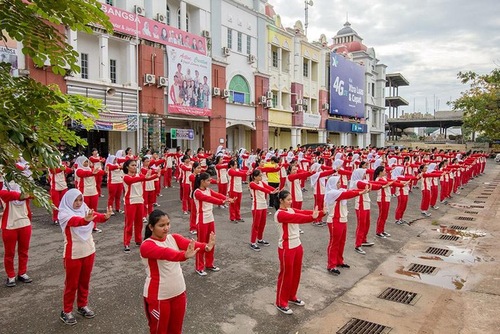 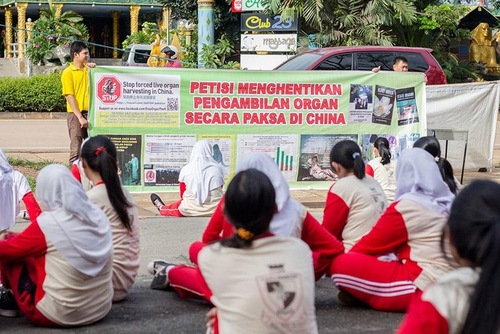 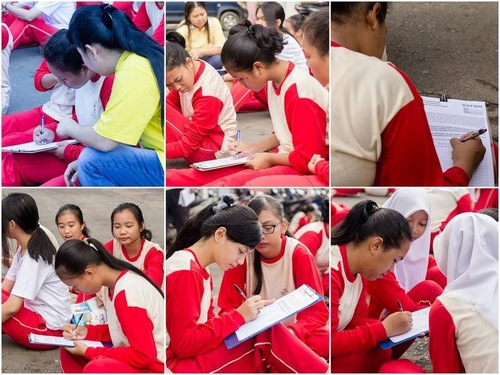 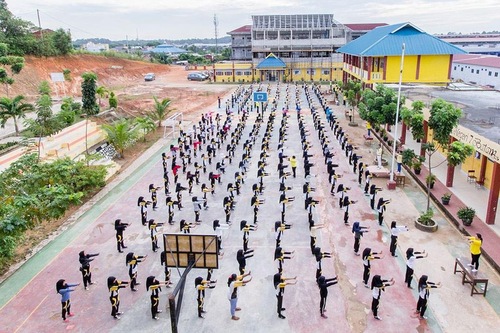 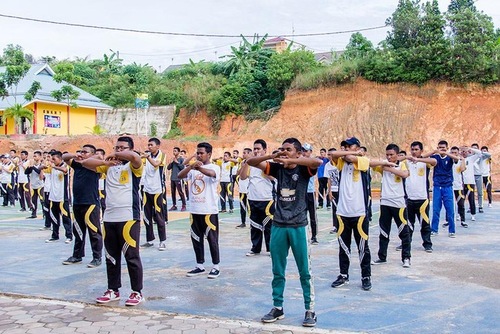 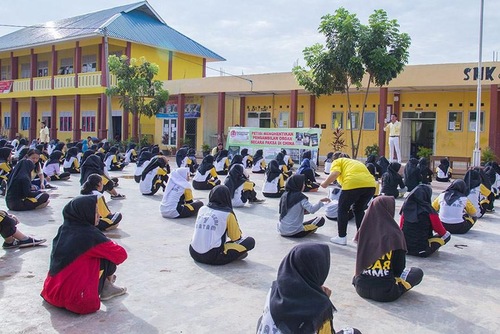 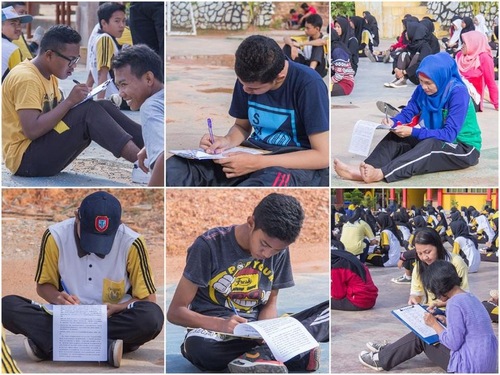 Students at Batam Seventh High School sign the petition against the persecution.