(Minghui.org) In the 17 years of persecution, Falun Gong practitioner Ms. Fu Liang has been arrested, detained in a psychiatric hospital, forced to take unknown drugs, and been imprisoned for her faith.

Below is the summary of her criminal complaint.

Held in a Psychiatric Hospital

I went to Beijing to appeal for the right to practice Falun Gong in November 1999 and was arrested. I was taken back to my hometown by police officers from Anshan City and sent directly to the Anshan City Detention Center, where I was held for 15 days.

I was then transferred to my workplace and detained for another 20 days. I was handcuffed to a stool the entire time, even when I slept. However, I refused to “transform”, so I was taken to the Anshan City Psychiatric Hospital right before the Chinese Lunar New Year.

I was forced to take unknown drugs by doctors who would put pills inside my mouth and make me swallow them. If I refused, they would tie me up on the bed and force-feed me.

My husband took me home after the Chinese New Year, but security personnel from my workplace and the local police continued to harass me. I was then forced to leave home in 2000 to avoid further arrest.

As soon as I went back home to visit my family, the police broke into my home and arrested me, my husband, and my daughter.

They handcuffed me to a heater for some time before sending me to the Anshan City No. 2 Detention Center. 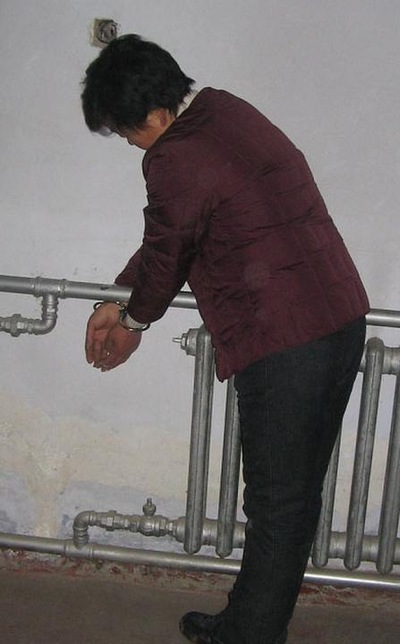 Handcuffed to a heater

I was locked in a cell, so I went on a hunger strike to protest the persecution.

On the seventh day of my hunger strike, the director of the detention center ordered three male inmates to tie me to a chair, and three guards and several other inmates force-fed me with a tube. Several of my teeth were damaged, and my nose and my mouth were filled with blood. 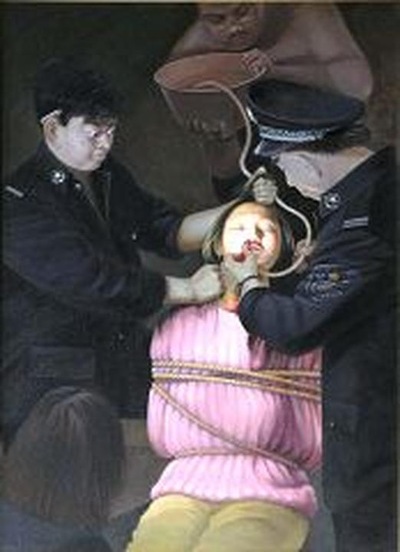 I was very weak by day 14 of my hunger strike. Officials at the detention center were afraid that I was in danger and sent me to a hospital, though still cuffed and shackled. I was diagnosed with multiple diseases and released three days later because the detention center did not want to take responsibility if something happened to me.

When the police found out that I had recovered, they tried to take me back to the detention center. I was forced to leave home for the second time to avoid arrest.

A fellow practitioner and I were arrested in 2002. I was sentenced to eight years in prison.

While at the detention center, I requested to file criminal complaints against Jiang Zemin, but the director said that I was not allowed to.

I was transferred to Liaoning Provincial Women's Prison six months later, but the prison refused to accept me because I had severe high blood pressure and a heart problem. Officials at the Anshan City Detention Center then forced the prison to accept me.

The prison guards tortured Falun Gong practitioners using various methods that included beating them with electric batons, poking them in the fingertips with needles, and forcing them to take unknown drugs.

They would also instigate the criminal inmates to beat and curse at practitioners who refused to give up their belief. The inmates would in turn get punished if the practitioners refused to renounce Falun Gong.

I was imprisoned in the No. 6 Ward. I once told a prison guard that “Falun Gong is good.” I was then made to stand outside in the snow for three hours.

The 15 other practitioners and I in the No. 6 Ward were monitored by inmates around the clock. Guards harassed us every day, asking when we would renounce Falun Gong. If we refused, we were beaten by both the guards and the inmates.

My blood pressure often went up to 240 mmHg, and I was taken to the hospital many times to get treatment.

I was released on medical parole in March 2006, but was forced to go back to prison two-and-a-half years later.

I was released in 2010 after serving eight years in prison.

I once told a person about Falun Gong at a park in December 2013. Six police officers from the Anshan City Domestic Security Division and two officers from the local police station forced their way into my home three days later, arrested, me and confiscated a photo of Mr. Li Hongzhi (the founder of the practice), Falun Gong books, and other personal items. I was taken to the police station.

I was then sent to the detention center, but was not accepted due to my high blood pressure. I was temporarily released. The police told me to go back to the police station then next day, so I left home to avoid further persecution.

My family members informed me that the police went to my home in 2014 to ask about my whereabouts.

Under his personal direction, the CCP established an extralegal security organ, the 610 Office, on June 10, 1999. The organization overrides the police forces and the judicial system in carrying out Jiang's directive regarding Falun Gong: to ruin their reputations, cut off their financial resources, and destroy them physically.

“City Stirred by a Falun's Appearance”