(Minghui.org) The International Forum on Forced Organ Harvesting in China was held in Berlin, Germany on October 28, 2016, days before the official human rights dialogues between China and Germany, as well as between China and the European Union. Elected officials, including a member of German Parliament (MP) and a member of European Parliament (MEP), attended the forum and gave speeches.

MP Martin Patzelt gave the opening speech at the forum, calling for all circles to work together to stop the Chinese Communist Party's (CCP) state-sanctioned organ harvesting from living Falun Gong practitioners. 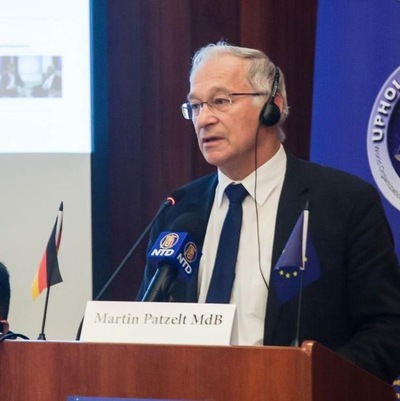 MP Martin Patzelt is from the former East Germany. When he was young he believed that the Communist Party would collapse. He remarked at the opening of the forum, “Live organ harvesting has been going on for more than ten years. It has not reduced, but has increased. The many ways the news has been spread to the world are still not enough. How can we tolerate this crime and keep silent?”

He continued, “It is unprecedented that a country participates in forced live organ harvesting for profit. If we do not work for human rights on this issue, we have to ask ourselves whether we are even human.”

He indicated that the forum should be held around the world to let all people know about the crimes, and that Germany needed legislation to stop illegal organ trafficking.

MEP: Perpetrators Must Be Brought to Justice 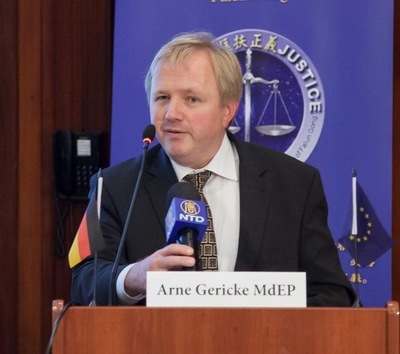 MEP Gericke spoke during the forum and condemned the crimes. He said, “It is alarming to see with what sort of hardness the Chinese regime prosecutes the Falun Gong movement for more than 17 years, and how it overrides all applicable regulations and human rights, especially in the field of organ harvesting.

“As a member of the European Parliament for the Family Party, and an expert on human rights for my EKR-coalition party I say openly: Europe may not ignore these criminal acts. We must do something against it, with all determination.

“Therefore at the beginning of this year I and colleagues from other coalition parties have brought on the way the Written Declaration (2016/WD48) requiring action to end organ harvesting from Falun Gong-Practitioners and other prisoners of conscience. 414 colleagues of all factions in the European Parliament from 28 European countries have been persuaded to sign in support. To me this Written Declaration is an important step, a milestone, in the fight against the state-sanctioned organ harvesting crimes in China.”

He continued, “Since my start in the European Parliament I myself was concerned with reports and expert opinions that undoubtedly provide evidence that in China the so-called prisoners of conscience – most of them are Falun Gong practitioners – are killed “on demand” for their organs to supply the transplant market of China, Asia, America, and Europe in a minimum of time with organs as needed.

“We speak about billionaire business and mafia structures with the aim to make profit by meeting the high demand for healthy living organs – whatever the cost. Even if it is the lives of innocent people.

“We must assume that organ harvesting is deliberately sanctioned and covered up by the Chinese Communist Party. We must assume and name it that millions of Falun Gong practitioners were held captive without a statutory basis and that institutions in the transplant area are available as 'lucrative living organ stock' –as bad as it sounds.

“There are numerous reports of eye witnesses of torture and humiliation which practitioners were subjected to behind doors in detention facilities, holding cells, law education facilities, coercive drug rehabilitation centers, brainwashing centers, and black prisons.”

“According to the annual Amnesty International Report 2012, peaceful Falun Gong practitioners were pressured systematically through mental and physical torture, throughout the country, and often violently tortured. Freedom House informed in 2015 that Falun Gong practitioners constitute the biggest part of the prisoners of conscience, and are exposed to a higher risk of dying or getting killed in detention. And the UN Special Rapporteur on Torture pointed out in his report in 2006 that 66% of the alleged cases of torture and abuse are Falun Gong practitioners.

“The United States Commission on International Religious Freedom confirmed in its annual report of 2016 that in 2015 thousands of Falun Gong practitioners were arrested and deported to brainwashing facilities, labor camps, detention centers, prisons, and similar facilities, and contrary to the majority of the other inmates got longer sentences and worse treatment. Furthermore the report of 2016 revealed that the CCP prefers detained Falun Gong practitioners for organ harvesting.”

He talked about the reason that the former head of the CCP initiated the persecution, “And why? We can only guess. It surely was, and is, the fast-growing popularity of Falun Gong, which sparked a sense of threat to the former General Secretary of the Central Committee of the Communist Party, Mr. Jiang Zemin. An estimated 100 million Falun Gong practitioners faced about 60 million Communist Party members shortly before the start of the persecution of Falun Gong in July 1999.”

He also talked about the written declaration of European Parliament against the live organ harvesting, “As the European Parliament, we are saying in our written statement, for the first time, that in the People's Republic of China, more than 10,000 organ transplants are being conducted every year.

“We refer to the fact that some 165 Chinese organ transplant centers have advertised that they can find and provide appropriate and matching organs within two to four weeks, even though there is no organized public system for the donation or distribution of organs in China!

“We also say that the Chinese organ transplant system does not meet the requirements of the World Health Organization with regard to transparency and traceability of the organs, and that the Chinese government continues today to oppose an independent control of this system.”

“And what do we demand in the resolution? We emphasize the fact that it is simply unacceptable that the gradual cessation of the organ harvesting from executed prisoners has not yet been carried out as of today. We unequivocally urge China to immediately stop organ harvesting from nonviolent political prisoners and members of religious and ethnic minorities.

“We demand from China that the requests from the United Nations Special Rapporteur on torture and other cruel, inhuman, or degrading treatments or punishment finally be answered completely. And the United Nations Special Rapporteur on freedom of religion, and freedom of belief, and freedom of worldview also finally wants a complete answer of the origin of the additional organs in connection with the increase of organ transplantations, and to finally commence a thorough investigation into the practices of organ transplantations in China.

“We call for the immediate release of all non-violent political prisoners in China, including the followers of the Falun Gong movement and Christians.”