(Minghui.org) Yuzhang Prison in Nanchang City is notorious for its aggressive tactics, including the use of torture, in trying to force Falun Gong practitioners into giving up their spiritual beliefs. Practitioners are first locked in solitary confinement and subjected to physical abuse and relentless brainwashing. Their daily routines also include constant humiliation and verbal abuse. Family visits are almost always denied for practitioners who refuse to renounce their faith. These steadfast practitioners are more likely to have their terms extended or simply continue to be incarcerated after their terms end.

According to an ongoing survey by Minghui.org, 66 male practitioners are confirmed to have been incarcerated at this prison at one point or another since 2000. Due to the Chinese regime's information blockade, we do not have detailed sentencing information for each one of them. The 33 practitioners with known sentences were given prison terms ranging from 1 to 11 years, with an average of 5 years. 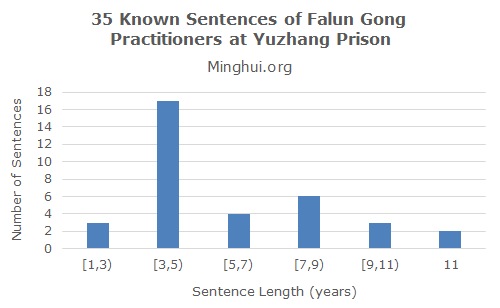 Two practitioners were sentenced twice for their faith. Mr. Yi Yucai was given 8 years in January 2005. Shortly after his release, he was sentenced to 3.2 years. Mr. Huang Zhimin was sentenced to 3 years twice, first in 2000 and then 2004.

The following are forms of abuse often used on Falun Gong practitioners at Yuzhang Prison.

Solitary confinement is a prison within a prison. The cells are dark, completely isolated, and fitted with a concrete bed.

Mr. Wang Silong was held in such a cell for six months. He contracted tuberculosis and was eventually hospitalized.

Mr. Dai Chuanyi was held in solitary confinement, in a cell crawling with centipedes and ants. He was forced to stand with his knees locked and fingers touching the ground. He fainted after a long time in this painful position.

Mr. Sun Shilian was forced to stand facing the wall for an extended period of time. His lower body became severely swollen. Mr. Yang Dexin was tortured the same way for over three months.

Corporal punishment includes beatings, shocks by electric batons, being hit by wooden clubs, dumbbells, chains, and wrenches, and being whipped with electric wires.

Mr. Huang Dong'an had chronic bloody bowels because of the constant beatings. When Mr. Huang refused to renounce Falun Gong at the authorities' demands, guards ordered inmates to hit him repeatedly with wrenches.

A guard ordered a dozen inmates to take turns beatings Mr. Li Qing. He was shocked with electric batons and whipped while naked with thick copper wire for ten days. Much of his flesh was torn open as a result.

The inmates were ordered to hit Mr. Tu Guofan with dumbbells every night. He vomited a large amount of blood as a result.

Guards also instigated inmates to slam metal chains against Mr. Yang Shiqian's ankles. They covered his head with a blanket and beat him. His ribs and shoulder blades were fractured, and he couldn't breathe normally. He was covered in bruises, and his wounds festered. His legs were swollen.

Mr. Sun Shilian had asthma and almost died after a beating. He later developed emphysema and tuberculosis, and had to rely on oxygen to help him breathe.

Falun Gong practitioners often go on hunger strikes to protest their illegal imprisonment and mistreatment. Prison authorities, without any medical training, brutally force-feed them. In addition, officers often place nerve-damaging drugs into the practitioners’ food in an attempt to break their willpower.

When guards ordered inmates to insert a tube into Mr. Hu Jiuxue, they perforated his esophagus. He subsequently developed a lung infection and was not given any treatment. As a result, his liver was damaged, his lungs developed cavities, and he coughed up blood.

The prison put nerve-damaging drugs in Mr. Yin Yucai's food and water before his scheduled release. Mr. Yin started to have joint pain and delusions. He was incoherent when he was released. He became terrified of human contact and repeatedly talked about someone wanting to kill his family and that he couldn't go home.

The practitioners often have to work nonstop for long hours each day to make labor-intensive products for export.

Mr. Yang Dexin couldn't finish making the quota of 1,000 colored light bulbs each day during New Year's in 2006. The guards punished him by handcuffing his arms behind his back and suspending him in the air by the handcuffs. This hanging torture causes extreme pain and is likely to cause permanent damage to the victim's wrists and shoulders.

In early 2002 Mr. Xiao Yuanguang was forced to make decorative string lights from 8 a.m. to well past midnight each day.

Mr. Yin Yucai was forced to sew and make clothes for long hours. The daily labor-intensive work caused his health to deteriorate and his body to swell.

5. Brainwashing, Humiliation and Other Psychological Abuse

The prison puts practitioners through brainwashing sessions twice a year. In the morning, they are forced to watch propaganda videos attacking Falun Gong and its founder. At night, they are physically tortured.

Right before Mr. Yin Yucai's scheduled release, he was injured during his brainwashing sessions and had to be hospitalized for 20 days. After he began to show improvement, he was taken back to the prison, where he continued to be brainwashed. The 80-year-old man vomited blood and had bloody bowels as a result of the mental and physical torture.

Guards woke up Mr. Yang Dexin each night to force him to watch propaganda videos. He was allowed only an hour of sleep each day.

The guards verbally abused and slapped Mr. Xiao Yuanguang every time they saw him. When Mr. Li Qing was placed in solitary confinement for 45 days, guards instigated inmates to pour feces and urine on him.

Mr. Chen Xiangyang has been incarcerated in the prison since 2006 and was never allowed family visits. His father died without seeing him for the last time.

Mr. Wu Tengpeng's family attempted to see him many times. Every time they got to the prison, the authorities would give them the runaround and deny their visits. They had to travel hundreds of miles each time back and forth.

Mr. Yin Yucai was scheduled to be released at the end of December 2010. The prison authorities arbitrarily extended his term to March. When March came, the prison intensified his torture instead of releasing him. He was eventually released in July 2011.

The prison authorities colluded with police and forged evidence against Mr. Xiao Yuanguang before his scheduled release. On the day of his release, Mr. Xiao was arrested and put in Nanchang Forced Labor Camp for another three years.

“China Fahui | Listen to Master and You Will Be Safe”