(Minghui.org) Today's news from China includes incidents of persecution that took place in 15 cities or counties in 11 provinces. According to this report, 8 Falun Gong practitioners were subjected to mistreatment during their detention, and at least 18 were illegally arrested. 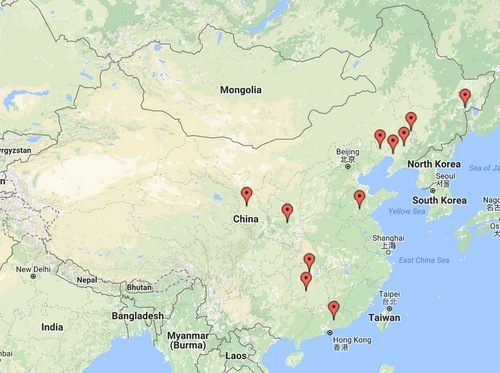 Ms. Li Niangxin and her six-year-old son were arrested at home and taken to the Heyuan City Drug Rehabilitation Center on the afternoon of September 24, 2016. They were later transferred to the Yuancheng Police Station, where she saw her husband, Mr. Liu Qingqiang, handcuffed to the window, with his feet dangling above the ground.

The officers ransacked their home and confiscated a computer, three printers, Falun Gong books, photos of the founder of Falun Gong, six or seven memory cards, two cars, two cell phones, and a radio. She is being held in the Huidong County Detention Center.

Ms. Yin Hong has been held in the Baiheshan Detention Center for over a year. She has been on a hunger strike for more than a month. She was force-fed at first and is now on intravenous drips. She is very weak.

Ms. Liu Junling, who worked at the Jiguan District Police Department, was dismissed from her job in August 2016 for talking to her co-workers about Falun Gong. She has to do odd jobs to earn a living.

Mr. Yu Changhua was arrested on the morning of June 24, 2016, by Guchengzi Police Station officers for talking to people about Falun Gong. He was released after 15 days of detention. He was again arrested in early September and taken to the Panjin City Detention Center.

Ms. Liu Yuying was also arrested on June 24. Officers extorted 35,000 yuan from her.

Ms. Wu Yun from the Liaozhong District was not released after her prison term ended on September 26, 2016.

A residential police officer from Xiwei Town and three officers from the Yitong County Domestic Security Division went to Mr. Zhao Fa's home on September 28, 2016. They arrested him and took him to the police department. Mr. Zhao was released on October 3, 2016, after five days of detention.

Ms. Zhao Yanfeng and Ms. Xia Dongmei were reported for talking to people about Falun Gong on September 15, 2016. They were arrested by officers from the Xiguan Police Station. Ms. Xia has returned home.

The officers went to Ms. Zhao's home and ransacked it the evening of the arrest. She was officially placed under arrest on September 30, 2016. She remains in the Lianhu Police Department Detention Center.

Mr. Deng Honghua was arrested around September 19, 2016, for distributing Falun Gong materials. His whereabouts are unknown.

Officers from the Shengli Township Police Station in Chaoyang County broke into Ms. Sun Guo's home in Dongshan Village on October 1, 2016. They ransacked the place and confiscated Falun Gong books and a copy of Minghui Weekly. Her husband was taken to the police station for questioning.

Ms. Sun and her non-practitioner husband were carried into a police vehicle by several domestic security officers from Chaoyang County in the spring of 2000. She was released after she convulsed. The county domestic security officers went to her home again the following day and demanded to be paid travel expenses, which Ms. Sun refused to do. The officers then confiscated two porcelain altars. They arrested her husband and him in a detention center for a month.

Officers from the Duozhuang Town Police Station in Mengyin County and from the Dadian Town Police Station in Junan County broke into Ms. Wang Houling's home in Duojuguanzhuang Village, Dadian Town, on the afternoon of September 26, 2016. They arrested her and confiscated a cell phone and a small music player. They took her to the Mengyin County Detention Center, which refused to accept her because of high blood pressure. Ms. Wang was released on bail the next day.

Without holding a hearing, Yueyang Intermediate Court upheld the convictions of five locals sentenced to prison for practicing Falun Gong. The defense lawyers' demands for a hearing were denied.

All five practitioners were arrested in July 2015. Ms. Wang Ximei, Ms. Li Yanhe, and Ms. Hu Guanxia were taken to the Hunan Women's Prison on May 10, 2016, to serve their terms. Ms. Wang was given two years, and Ms. Li and Ms. Hu each four years.

Ms. Ai Lianfang was released on July 8, 2016, after finishing her one-year term.

The four practitioners still in prison have been denied family visits because of their steadfast belief in Falun Gong.

Ms. Liang Meihua, 67, was arrested on April 19, 2016, and tried on May 4. Her family was notified in mid-September that she had been taken to the provincial women's prison. Her family was then told that she was moved to the prison hospital due to her declining health.

Ms. Yu Cuihua, in her 60s, was arrested on January 28, 2016. She was first held in the Xinjian District Detention Center and then transferred to the Nanchang City First Detention Center. The police refused to release her even though the law requires her release because she was not formally arrested.

This is not the first time Ms. Yu has been targeted for her faith. She was twice given forced labor and once sentenced to prison in the past.

Mr. Tang Yiqing was released from the Benxi Prison on September 24, 2016. His elderly parents went to the prison to pick him up. Officers from the Maokuishan Police Station also arrived at the prison and intended to arrest him. They failed when his family protested.

The police continued to harass Mr. Tang, demanding that he report to them daily.

Mr. Wang Shengliang and his wife Xiao Meijun were arrested on May 18, 2015, by officers from Xiangtan County Domestic Security Division. The 4th Court of Xiangtan Court tried them on January 21, 2016. It was said that the couple was sentenced to three years in prison recently. Mr. Wang was taken to Wangling Prison in Zhuzhou, Hunan Province, while Ms. Xiao was taken to Changsha Women’s Prison in Hunan Province.

Since October 2015, many practitioners have been arrested or harassed by officers from the Chaoyang County Police Department and its branches for filing criminal complaints against Jiang Zemin, the former head of the communist regime.