(Minghui.org) The city of Paris is popular with visitors from China. Over the years Chinese tourists have listened to Falun Gong practitioners talk about Falun Gong and the Chinese Communist Party's (CCP) persecution of the practice, and many have agreed to quit their memberships in the CCP and its affiliates.

“I know everything about the CCP,” said an official from the Chinese Ministry of Health. “I've had to attend several conferences that the Ministry of Public Security arranged. I dislike the Party. As long as it exists, people will suffer.” 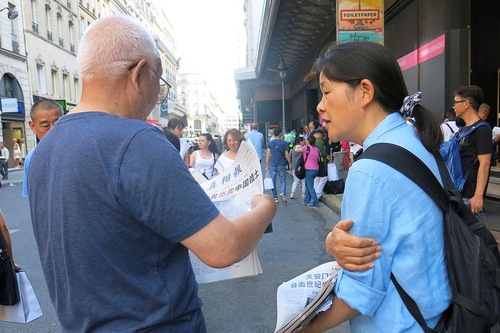 A Falun Gong practitioner talks about the persecution to a Chinese tourist in front of a well-known department store in Paris. 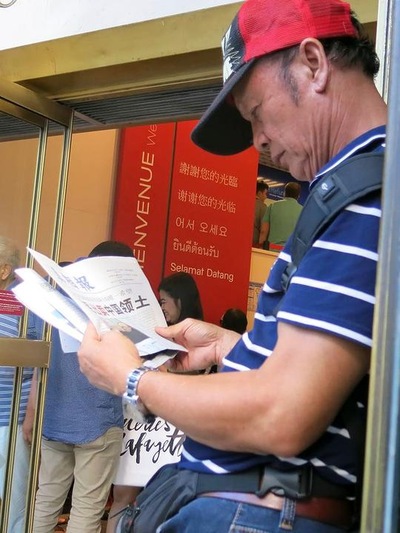 A Chinese visitor reads a newspaper received from a Falun Gong practitioner. 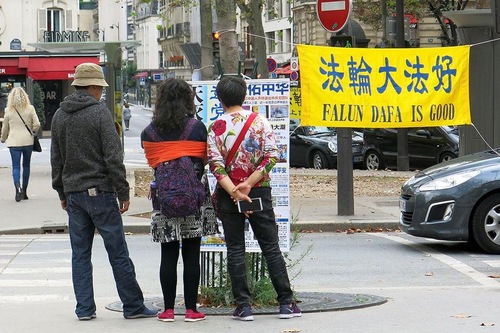 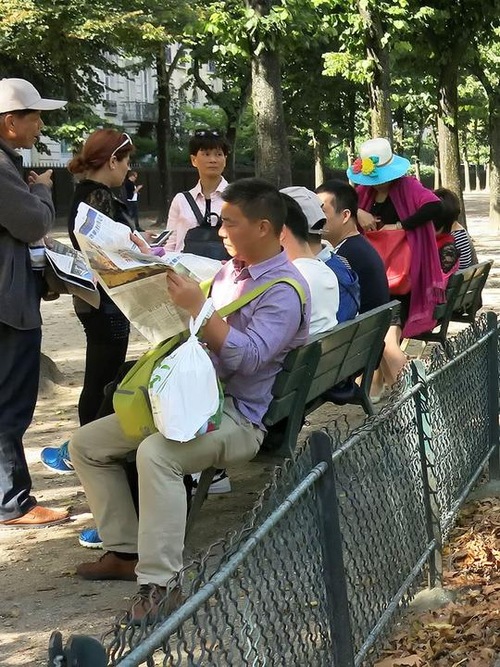 Visitors from China read about Falun Gong near the Eiffel Tower.

Talking with a Former 610 Office Official

“I was in charge of Falun Gong for a 610 Office branch in a police station,” said a tourist to a Falun Gong practitioner in front of Galleries Lafayette. “I am retired now. Falun Gong is good for health. Truthfulness-Compassion-Forbearance is good. But your participation in politics is not good.”

The practitioner said, “We Falun Gong practitioners do not have any interest in politics, but only good health and morality. Falun Gong was suddenly banned in China in 1999. Many practitioners were sent to forced labor camps or imprisoned. Many were dismissed from their jobs. Practitioners are killed for their organs under the CCP's systemic persecution.

“Is exposure of this persecution 'politics?' It is the CCP's evil nature that it does not allow people to have freedom of speech and freedom of press. Do you think this is reasonable?”

The man answered, “I have never thought about it from this angle. What you said is indeed reasonable.”

The practitioner said, “This is what we want you to know. You must be a member of the Party as you worked in a police station. Renounce the Party for a safe future!” He said he would, and thanked the practitioner.

Director of a Public Security Bureau Quits the Party

A practitioner talked with a tourist who said he was a director of a public security bureau in China and explained that the CCP would collapse. He asked, “Will the Party really be disintegrated?”

The practitioner said, “You know the system very well. The CCP is completely corrupt and slated to be discarded by history. More than 240 million Chinese have renounced the Party and its affiliates. Over 200,000 people have filed criminal complaints against former CCP head Jiang Zemin. Quitting the Party is to ensure a safe future for yourself.”

The tourist nodded his agreement and used an alias to renounce his membership in the Party.

“We North-easterners Are Proud of Master Li”

A practitioner saw several hundred Chinese tourists in a queue inside Galleries Lafayette, waiting to obtain a tax refund. The practitioner stepped forward, introduced Falun Gong, and told the tourist why they should withdraw from the CCP. One tourist who is a teacher said, “I already quit my membership as we hate the Party, especially Jiang Zemin. This is my principal and here is the Secretary of the CCP Committee for my school.”

Over ten people in this group officially renounced the Party. One of them said, “We know your Master and hope he will come back as soon as possible. We North-easterners are proud of him. We've browsed Falun Gong websites by getting around the [Chinese regime's] Internet firewall. The CCP is simply too evil and we know that the CCP's media spreads lies.”

Recently, many younger Chinese tourists have told Falun Gong practitioners that they wanted to read Falun Gong books. A practitioner told them that they can read the book for free online. One young person renounced the CCP after listening to a practitioner's explanation. She then offered, “I'll talk with this group of tourists about this. You go over there to talk with the others.”

The young woman came back a little later with the names of three tourists who wished to quit the Party and its affiliates. “I will ask my parents and friends to quit the Party. I'll also go online to read Falun Gong books after getting back home. I want to practice Falun Gong,” she said happily.