(Minghui.org) Liang Jinfeng (nicknamed Xinxin) still remembers when his mother dropped him off at his grandma's house one Friday afternoon when he was only three years old.

She told him that she would pick him up the next day. But it would be eight months before he saw his mother and father again, when they were being tried for refusing to renounce Falun Gong, a spiritual discipline being persecuted by the Chinese communist regime.

Xinxin's life was forever changed that Friday afternoon. He is nine years old now and living with his grandmother outside of China. 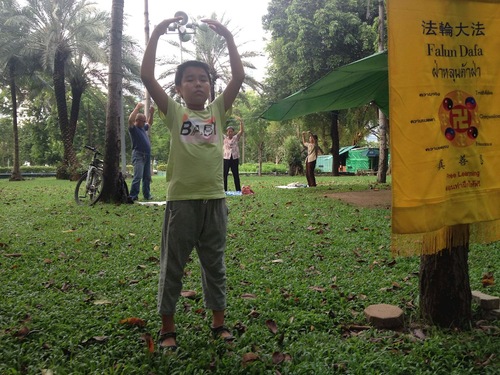 Xinxin's mother dropped him off at his grandma's house on August 20, 2010. When she didn't come to get him for two days, he became anxious. The next morning, Xinxin and his grandmother took the two-hour trip to his parents' home in Guangzhou City, Guangdong Province.

They found a newly installed padlock on the front door, along with caution tape.

Xinxin thought that his parents were inside and kept calling, “Daddy, Mommy, open the door! I'm home!"

His grandmother knew something was wrong and tried to convince him to leave, but he kept banging on the door, yelling “I miss you, please open the door!”

Xinxin and his grandma went to the local police station and found out that his parents were arrested and their home was ransacked the night before.

After that, Xinxin cried almost every day and asked his grandmother to take him back to his home to look for his mom and dad. A once happy child became quiet, irritable and unsociable.

Xinxin's grandmother, Ms. Luo Jinfeng, did not have any income. In order to rescue her daughter and son-in-law, the elderly woman spent her days visiting the court house, police station, and Procuratorate office. She also tried to find lawyers who would take on her daughter's case.

With all these things going on, she had no time to take care of Xinxin. So she sent him to preschool.

However, Xinxin was not happy at school. He cried every day.

One time, the teacher became very irritated by Xinxin's crying. He slapped Xinxin and scolded him loudly.

Another time, Xinxin didn't do well during a competition. The teacher was angry and slapped him again. Xinxin still remembers that incident after many years.

“He hit me so hard!” he cried to his classmates. But his teacher had no sympathy.

“He is the son of an anti-revolutionary! He deserves it,” said the teacher to the other students.

Terrified of being beaten and scolded again, Xinxin stopped going to preschool after two months.

Mom and Dad Are Back, but Life Is Not Normal

Eight months after his parents' arrest, Xinxin finally saw them at a court hearing on April 29, 2011. When he saw the handcuffs on his mother's wrists, he tried to pry them open. He held on to his father's leg and wouldn't let him leave.

Xinxin's mother was sentenced to two years in prison with three years of probation. She was released in April 2012.

However, things did not return to normal for Xinxin's family after his mother's release. Xinxin's mother, Ms. Luo Xiaojuan, had been severely tortured at the detention center. Several times she'd passed out from forced-feedings and had to be sent to a hospital in critical condition.

For a long period of time after she returned home, she couldn't remember where her home was or what she'd done a short while ago.

In order to make a living, Xinxin's grandmother and mother decided to open a convenience store. But the store was robbed soon after it opened. Within a month, thieves had stolen cellphones, money and ID cards from Xinxin's mother three times. Xinxin's aunt was also robbed on the way home after work.

Unable to keep the store open, the family moved to Panyu District. But they soon found out that they were being monitored by the police. Their home was broken into several times.

The family moved seven or eight times to avoid harassment from local police. Xinxin could not stay at the same school either. Often, as soon as he got familiar with one school, his family would have to move.

In August 2013, Xinxin's dad, Mr. Liang Dong, was released from prison after serving three years. He had high blood pressure and skin irritations. He had been severely traumatized and was afraid his loved ones would suffer as he had.

When he saw Xinxin reading a Falun Gong book, he slapped him and scolded, “You are not allowed to practice Falun Gong!”

Xinxin cried and told his grandmother that he didn't want to stay at this home anymore.

He said, “They [mom and dad] are not the only one being persecuted, I am too! I am scared! I’ve lost the mom and dad that I knew!”

With the consent from her daughter and son-in-law, Xinxin’s grandmother took him to a different country, where she and her grandson can freely practice Falun Gong without fear. 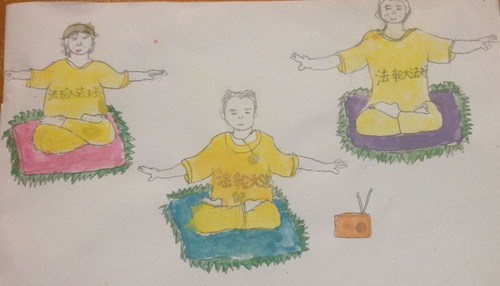 In June 2015, Xinxin's grandmother filed a criminal complaint against Jiang Zemin, the former leader of the Chinese Communist Party, for the suffering her family has endured. Xinxin also signed his name on the document.