(Minghui.org) Falun Gong practitioners in New Zealand embarked on a nationwide car tour in the first week of October 2016 to raise awareness of the Chinese Communist Party's (CCP) state-sanctioned killing of prisoners of conscience and taking their organs for transplants. The car tour visited over ten cities in two weeks. Their efforts drew attention from the media and the public, and many were outraged by the atrocities.

The first car tour team visited cities on the east coast, including Whakatane, Opotiki, Rotorua, Gisborne, and Napier. Participants included Falun Gong practitioners who had been brutally persecuted in China for refusing to renounce their faith.

The Gisborne Herald reported on the event on October 7, 2016. Its report, “Rallying against live organ harvesting,” featured the story of tour participants Guohua Huang and his daughter Luna.

Guohua Huang and his late wife were arrested in China in 2002 for possessing literature about Falun Dafa and the persecution by the communist regime. Mr. Huang's wife died in police custody while the couple were detained in separate prisons.

“Evidence has led me to believe they killed her for her organs,” said Mr. Huang in the article.

The report stated, “At the time, Mr. Huang’s wife was three months pregnant and their daughter, Luna Huang, was only 18 months old.” 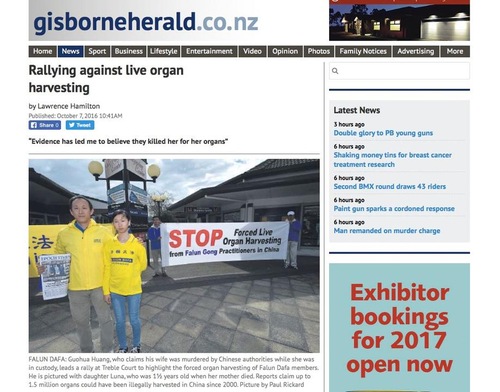 The Gisborne Herald covers the car tour on October 7, 2016.

As the newspaper had published a notice about the practitioners' arrival on October 3, a group of locals waited for the the car tour to show their support.

A Herald reporter asked Luna what New Zealanders could do to help. “'There are people being made orphans and tortured just for their beliefs,' Ms. Huang said. 'We have to let the world know because not many people do.'”

The article discussed the latest research on organ harvesting in China and global efforts to stop the atrocities, citing the work of investigative journalist Ethan Gutmann, co-author of a new report that estimates that up to 1.5 million organs could have been harvested in China since 2000.

Local media in other cities also reported on the car tour and organ harvesting, including Beacon in Whakatane.

The report stated, “When Hanwen Zheng recalls the torturous years she spent in a Chinese prison, tears stream from her eyes.”

“'They bent my body at a 90 degree angle and tied my hands above my back until they went black,' she said. 'I passed out and they poured ice cold water on my body.'”

The report continued, “'I was beaten because I would not eat and then I was force-fed. I lost all my top teeth from the force-feeding,' she said.”

“As she underwent two years of torture, she came to find out the real reason of her imprisonment. 'They wanted my organs,' Zheng said. 'Those who practice are very healthy. I found out what was happening to other prisoners and I feared for my life.'”

Ms. Zheng escaped to Thailand in 2003 and later immigrated to New Zealand. She was finally reunited with her husband, Sanpu He, in 2009 after he suffered in detention for 8 years. 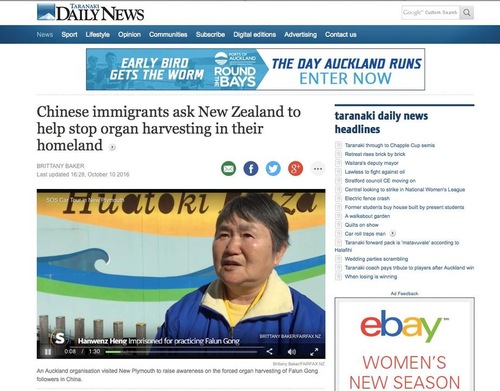 Practitioner Gao was touched by people they met in over ten cities during the car tour. Some people took extra informational materials to help distribute them.

“A elderly woman and her granddaughter in Gisborne stopped to talk to me,” he said. “She asked me for some materials and went to the city hall with her granddaughter. She said she wanted the mayor to know about this.”

In New Plymouth, a woman was touched after listening to Gao tell her about the persecution. “You are not only drawing support from New Zealand people, but also helping to revive New Zealand's values,” she said.