Gratitude from a Falun Gong Practitioner in Southern Taiwan

(Minghui.org) In Hengchun Town, the southernmost district of Taiwan surrounded by sea and vast grasslands, there is a group of steadfast Falun Gong practitioners. They gather at four every morning to start their day by exercising together. Ms. Weng Amin and her husband are among them. 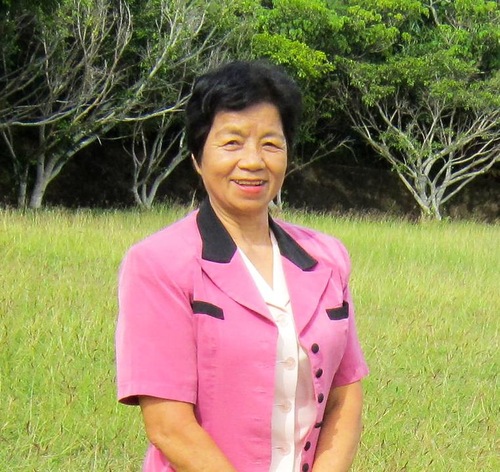 Awakened by a Bird

A dozen years ago a friend told Amin about the benefits of Falun Gong. She encouraged her husband to practice it, to see how he felt before she considered the practice herself. Her husband suffered from a liver problem and waking up early was hard for him with his bad health. Strangely from that day on, a bird appeared outside his window every morning around 4:00 a.m., chirping loudly and waking him up. He did the exercises every morning and felt comfortable and relaxed each time. A week later he told Amin, “This is a good practice. Let's do this together.” Both of them then became practitioners.

From Being Illiterate to Reading All of the Falun Gong Books

Amin, in her 70s, never went to school. She couldn't read and spoke only Taiwanese. When a practitioner suggested that they start reading Zhuan Falun, the main teaching of Falun Gong, she was embarrassed about her illiteracy and declined. The practitioner encouraged her to buy a copy of the book, saying that she must study the teachings. “You can sit next to your husband when he reads, then you can read along as you listen to him read,” the practitioner suggested.

“Teacher taught me and allowed me to read at this age! I really cherish it,” said Amin gratefully.

The two of them go to the exercise site every morning, rain or shine, and study the teachings every night for two hours with a group of other practitioners. Many of them were like Amin, going from not being able to read to being able to read all the books of Falun Gong teachings. They have all experienced amazing changes in their health and character.

Before the practice, Amin suffered from gynecological ailments and the pain made her hot-tempered and impatient. Her neighbors and even her son were scared of her. After she became a practitioner and followed the teachings of Truthfulness-Compassion-Forbearance, she became considerate in everything she did. Gradually, there was no more yelling in and around the home. When they saw that Amin and her husband had become healthy and that there was harmony in the home, some of their neighbors also decided to become Falun Gong practitioners.

After Amin does the exercises in the morning and finishes the farm work, she cleans houses to make extra money. One time she found 2,000 dollars under a sofa while she was cleaning and put it under the telephone for the owner to find. The owner came home and was impressed with her honesty. When Amin went to the U.S. for six months, the house owner was dissatisfied with the cleaning personnel he hired in her absence. After she returned he hired her back and told her, “When I hire people, I want to hire reliable ones like you Falun Gong practitioners.”

Once a very shy person, Amin now is able to take the initiative to help others. One day she was going home on her tricycle and saw a woman from out of town carrying a lot of luggage. The woman seemed too tired to walk. Amin offered to carry her luggage on the tricycle and let her take the seat while she pushed the tricycle to the train station. When they got to the station, the woman's family was very happy and offered Amin a lot of money. Amin refused and told them that she was only following the teachings of Falun Gong.

Once a week Amin goes to a tourist site to speak to Chinese tourists about Falun Gong and the persecution in China. She made up a slogan that rhymed in a funny way to draw their attention. Most Chinese visitors accept her fliers with a smile on their faces.