(Minghui.org) The annual Falun Dafa Cultivation Experience Sharing Conference in Hong Kong on January 17, 2016 was canceled after police received reports of a bomb threat. The incident was believed to be premeditated and instigated by a group associated with Chinese communist secret police, aimed at ruining the event.

Over 1,600 Falun Gong practitioners from Hong Kong and surrounding regions gathered at the BP International Hotel in Kowloon for an all-day experience-sharing conference on January 17. Outside the hotel were members of the pro-Chinese Communist Party Hong Kong Youth Care Association, who hung many banners defaming Falun Gong and its founder, Master Li. They also used loudspeakers to make noise and broadcast slander against Falun Gong in attempts to interfere with the conference.

The Youth Care Association is closely associated with the 610 Office in China, the Communist Party-run secret police-style agency set up to carry out the persecution of Falun Gong.

Just before noon, Hong Kong police ordered the evacuation of the hotel, saying that they had received an emergency call informing them that a bomb had been placed in the building. The conference was interrupted. Falun Gong practitioners were directed to nearby Kowloon Park to wait before reentering the hotel. They held group meditation and read Dafa books while waiting. The conference did not reconvene since police kept the venue floor locked down past the scheduled event time.

The police and bomb disposal specialists later found a package containing gas canisters and stopwatches in the men’s toilet on the floor where the conference was held. They determined that the package was in fact harmless, and no other items of concern were found.

The police allowed reentry into the hotel, except the conference venue floor, at 4:00 p.m. Coordinator practitioner Ms. Chang disclosed that the police kept the floor on lockdown, even though hotel management had agreed to allow the meeting to resume. 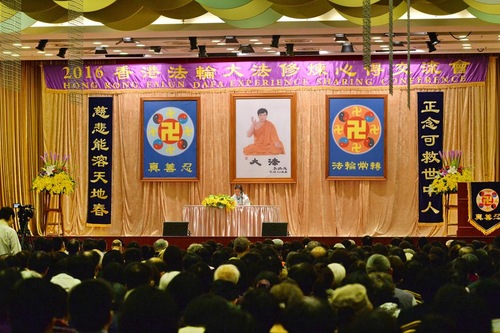 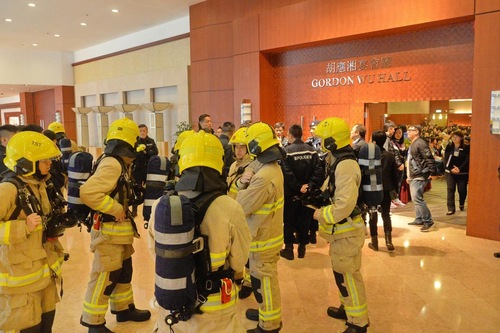 Firefighters and bomb disposal specialists respond to a bomb threat at the BP International Hotel in Hong Kong on January 17, 2016. 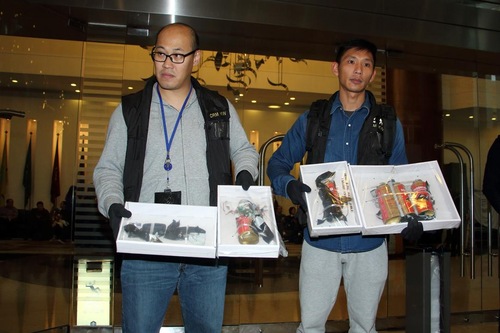 Hong Kong police officers show the fake bomb they found at the BP International Hotel in Hong Kong on January 17, 2016.

Members of Hong Kong’s legislature and democracy advocates condemned the bomb threat, and thought it could have been instigated by the Chinese secret police. They requested that police investigate and bring the perpetrators to justice as soon as possible.

Pro-democracy lawmaker Leung Yiu-chung said, “They (The Youth Care Association) want to block the Falun Gong event. They called the police to report a bomb threat.” He stressed that the Hong Kong Government should take this type of terrorist act seriously, and hold the perpetrators responsible. Otherwise, such issues may continue. This incident was directed at intimidating Falun Gong, and other groups could be targeted in the future.

Wu Chi-wai, another pro-democracy lawmaker, appealed to the police to investigate the incident, stressing that Hong Kong society would not tolerate these types of threats.

“Attacking from inside and outside, they reported a bomb threat inside and held a protest outside.” said Sin Chung-kai, Democratic Party lawmaker. He thought the hoax bomb was a threat against Falun Gong. He urged police to deal seriously with the incident, and arrest the perpetrators. A similar bomb threat occurred in the legislative council on January 14.

The bomb threat occurred in a hotel in the well-known tourist destination that hosted tourists from various countries. The Hong Kong Government has recently been actively promoting tourism, yet no government officials condemned the effect of the bomb threat on tourism. “Very strange!” said James Hon Lin Shan, spokesperson from the Defense Alliance of Hong Kong Liberty.

James condemned the Youth Care Association, which was connived by police to interfere with Falun Gong events after Leung Chun-ying, the current chief executive of Hong Kong took power. He felt that the bomb threat may have been masterminded by the Chinese Communist Party. He urged police to arrest the perpetrators. 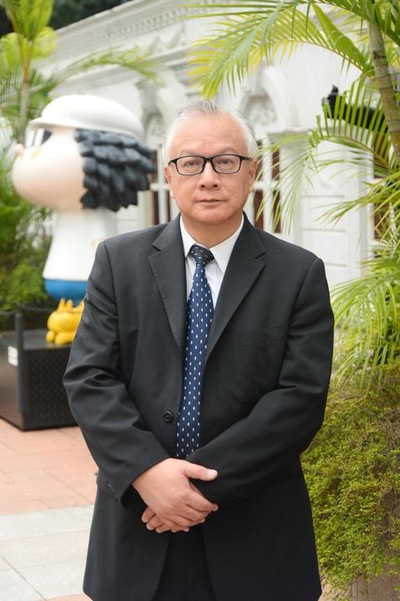 Kan Hung-cheung calls on the Hong Kong government and international community to address the incident.

Hong Kong Falun Dafa Association spokesperson Kan Hung-cheung said of the hoax bomb threat, “This is a case of the Chinese Communist Party’s terror and violence reaching into Hong Kong.”

Kan added, “We ask that the police thoroughly investigate this matter and bring to justice those who are responsible.”

He also called on the Hong Kong government and the international community to pay attention to the incident and uphold the “one country, two systems” arrangement.

“Everyone on the Bus Learned About Dafa”