Imprisoned 65-Year-Old Records Her Torture on Piece of Cloth

(Minghui.org) “I am writing this letter under rough conditions in the Heilongjiang Province Women's Prison. It's difficult for free people to imagine how hard it is to finish this writing. I have to write every word on this piece of cloth. Meanwhile, I have to avoid being detected by inmates monitoring me.” “Every minute here is the accumulation and continuation of evil crimes.”

These are a few of the words a Falun Gong practitioner wrote on a piece of cloth while imprisoned. Her name is Li Wenjun, a 65-year-old retired teacher. She is still in prison for refusing to renounce her faith. 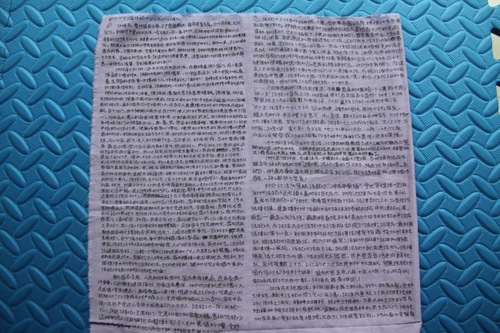 Ms. Li was arrested in May 2012 for practicing Falun Gong, a meditation practice persecuted by the Chinese communist regime. She was later sentenced to five years.

She complained about her torture to the prison authorities many times, but never received a response. She then managed to write her complaints on a piece of cloth and had it smuggled out of the prison to share with the public. She also called for an investigation into the widespread abuse and torture of Falun Gong practitioners held in state custody throughout China.

The following is an excerpt of her personal account of torture in Heilongjiang Women's Prison.

Beaten and Deprived of Sleep

I was taken to Group 4, Section 9 of Heilongjiang Province Women's Prison on November 7, 2012. There were 12 people held there. Guards assigned two of them, Chen Xuehui and Ren Wenxin, to take turns watching me.

They didn't let me sleep at night and forced me to sit still on a “small stool.” They cursed at me and beat me as soon as I dozed off. Chen used a hard stick to poke my nostrils. Ren opened my eyelids and pinched my mouth to keep me awake. When I moved forward a little, Ren jumped up and stomped on my toes.

Hung Up on Metal Bed

Ten days later, on November 12, they used a leather belt to hang me up to a metal bed frame. They wrapped tape around my body, which made it hard for me to breathe.

I felt suffocated at night and asked them to take off the tape. They wouldn't listen and kept hitting me in my chest, arms, and head. They taped my mouth shut and proceeded to beat and curse at me for the next 12 hours.

From the moment when I was hung up to the bed frame, the 12 prisoners in the cell took turns to beat me. They treated me like a punching bag. They cursed at me, pulled my hair, hit my head, slapped my face, beat me, kicked me, and poured cold water over my head.

In the daytime, they watched me together. As soon as I closed my eyes, they all crowded around me. At night, they took turns to watch me.

Force-Fed and Denied Toilet Use

I wasn't allowed to use the toilet after I was hung up. On the fourth day, November 15, my bladder ached as if it was being cut by a knife, and I couldn't help relieving myself in my pants. My cotton-padded pants were soaked with urine.

For four consecutive days, I couldn't eat, drink, sleep, or use the restroom. Nevertheless, they still force-fed me as a form of torture.

They claimed that they managed me by humane means, so they couldn't keep me hungry. Then they started force-feeding me together. A few people forcibly pressed me down, while others grabbed my hair and turned my head upwards. A nurse inserted a plastic tube into my nostril while cursing at me.

I asked them, “Where should I go since you don't let me use the toilet?” They shouted, “Just do it in your pants!”

All the prisoners in the cell kept cursing at me because of my urine-soaked pants. On the sixth day, I had hallucinations and felt weak all over.

Sitting on “Small Stool” and Hung Up

At the end of February 2013, I was transferred from Group 4 to Group 2 of Section 9. Again, they began by forcing me sit on a “small stool.” They beat me and even tore off my buttons because I refused to follow their orders.

Guards came and handcuffed me to a bed frame again. The handcuffs cut off my circulation. When I shouted for them to stop cuffing me, they sealed my mouth with cloth. In the same evening, they put me in a small isolated cell.

Fifteen days later, I was transferred to Group 11, where the torture procedure was the same. I was again forced to sit on a “small stool” and hung up to a bed frame.

Locked in Isolation, Forced to Relieve Self in Small Plastic Box

There was no heater in the isolated cell, so I was left shivering.

The cell had a cement floor with iron chains and rings. They locked me in the chains that connected to the rings on the ground. It was impossible for me to stand or squat.

There was a small urinal inside, but I was not allowed to use it. Instead, they prepared a small plastic box on the floor as a urinal. It was hard for me to use my feet to move it to my side. Just think–I couldn't squat or stand up, and meanwhile, I was handcuffed. It was so painful to use the plastic box to relieve myself.

In early July 2013, I was again put into a small, isolated cell. They force-fed me twice each day, once in the morning and once in the afternoon.

Group leader Teng Xuejian said, “We'll feed you some nutrition since you don't eat food.” She added garlic cereal and poured concentrated salt into the rice water, then force-fed me.

Having been on a hunger strike for many days, my stomach couldn't absorb garlic and much salt. I threw up, and the mixture was splashed on their clothes. They ran over and beat and kicked me together. Teng poured the remaining rice water over my face and head.

Every time they force-fed me, the leader tread on me with her boots, while Teng pulled my hair up. Inmates pushed me down and held me still. Meanwhile, my hands were cuffed.

In Heilongjiang Province Women's Prison, guards tortured Falun Gong practitioners to force us to write four statements: one of repentance, one to separate from Falun Gong, one guaranteeing not to practice Falun Gong anymore, and another to denounce Falun Gong.

Sections 9 and 11 were used as bases for “transforming” practitioners. The prison set up two teams to torture us: the “Attack Team” and the “Strengthening Team.”

The team members consist of guards and other inmates.

As soon as a Falun Gong practitioner was taken to the prison, she was put under the Attack Team, where guards and inmates took turns to watch our every action. We were not allowed to close our eyes or speak. We had to sit straight and put our hands on our knees. We sat there all day and all night. Once we dozed off, they kicked and beat us.

The Strengthening Team was designed to brainwash the practitioners who couldn't bear the torture and promised to renounce their faith, because the prison officials were afraid of such practitioners resuming their practice.

Under this team, practitioners were forced to watch propaganda videos in the morning and do slave labor in the afternoon.

Several Examples of Other Practitioners' Torture

I witnessed many cases of Falun Gong practitioners being tortured in the prison.

One day at the end of February 2013, Ms. Li Yaoguang, who had been forced to give up Falun Gong under torture, announced that she was taking back her renunciation. Guards tortured her from 8:00pm until 3:00am the next morning. Her aggrieved cries could be heard clearly. She was tied spread-eagle with thick ropes to a metal bed frame. Her head drooped, and her mouth was sealed with tape.

Ms. Sun Wuhu's toes were fractured, and her back bones were bent and swollen from beatings.

Ms. Tan Guiying was hung up for many weeks. Her hands and arms lost sensation after she was let down.

Qi Yaru was unable to ingest food after being tortured.

Ms. Li Xuejun suffered a stroke and was paralyzed. She could no longer care for herself.

Ms. Gang Fengqing, in her 60s, was tied to a bed for over one month. Her legs became black and purple.

Many of the above-mentioned practitioners, including Ms. Li Wenjun, are still suffering torture on a regular basis. We call for people to spread the word about their ordeals and urge the authorities to investigate and stop the mistreatment of Falun Gong practitioners in China.