Sydney, Australia: “I Was Looking for Something Wonderful and I Found It Here”

(Minghui.org) When Sydney Falun Gong practitioners went to the Town Hall Square on George Street last Friday afternoon to tell people the benefits of Falun Gong and its severe suppression in China, many passersby were drawn by the gentle movement and stopped for more information.

Denny, a student majoring in performing arts, was interested in the exercises. After hearing practitioner volunteer Amy explain what Falun Gong is and how the principles of Truthfulness-Compassion-Forbearance have brought positive changes to practitioners, Denny became very excited, “I was looking for something wonderful and I found it here.”

He said he could feel the positive energy in the meditation, which is distinctly different from other things one usually sees on the street. He then learned all the standing exercises from Amy and thanked her, “Doing these exercises has brought me relaxation and peace. Especially the second exercise [Falun Standing Stance], as it made me feel so good.” 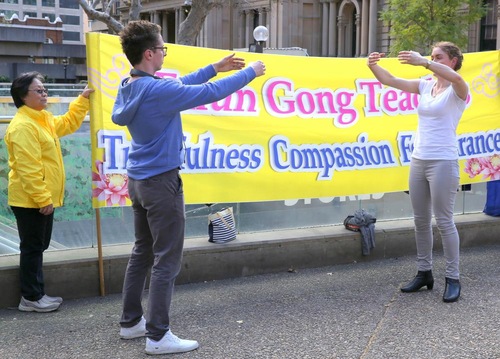 Before he left, Denny also signed a petition calling to end the persecution in China.

Many people in Australia have heard about the human rights violations against Falun Gong practitioners in China, after the national television network SBS broadcast in April a documentary titled “Human Harvest.”

Following the investigative work by Canadian Nobel Peace Prize nominees David Matas and David Kilgour on how state-run hospitals in China harvested and sold organs, this documentary won the 2014 Peabody Award, and it exposed that tens of thousands of Falun Gong practitioners have been killed for their organs.

Among pedestrians who signed petitions to support practitioners, Sean Lealiifano said he is a Christian and he hoped the signature could help end the brutality, “Nobody should do something as bad as live organ harvesting—it is totally wrong.” 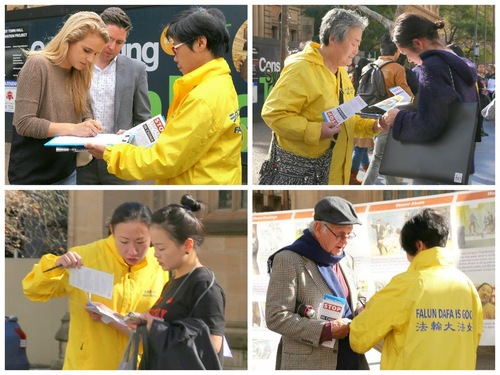 “Opportunities Abound for Practitioners in Their Efforts to Clarify the Truth”