Practicing Group Falun Gong Exercises in Beijing in 1992 and 1993

(Minghui.org) Master Li Hongzhi held a series of 13 seminars in Beijing in 1992 and 1993, during which he lectured on the Falun Gong principles and taught the exercises. 13,400 people attended Master's lectures.

There were over a thousand practice sites in Beijing in 1998. Beijing's Falun Gong Association organized some group exercise events, which were attended from a few hundred to about four thousand people.

Master Came to the Practice Site

Master, dressed in a gold exercise suite, came to the Beijing Ditan Park, where over 200 people practiced the Falun Gong exercises, around 9 a.m. on a Sunday morning in June 1993. Some practitioners who saw Master arrive alerted everyone. When some stopped, Master waved to everyone to carry on. Master corrected some inaccurate movements of practitioners.

A few days later, Master and his 11-year-old daughter Meige visited the Ditan Park practice site. Meige also did the exercises. Disciples who could see other dimensions said that a big Buddha appeared in Beijing's sky. Practitioners could also see colorful Faluns (law wheels) of different sizes on the ground and in the air.

Master visited a few large practice sites in Beijing, such as the Ditan, Tiantan, and Longtan Lake sites in 1992 and 1993. Master corrected some of the inaccurate movements of practitioners, which encouraged them to be more diligent, and also attracted more people to practice Falun Gong. Many young practitioners joined because of Meige. 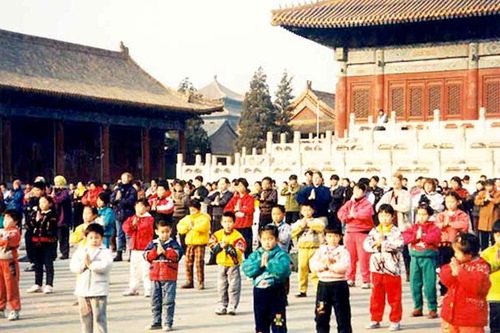 Group exercises looked magnificent. There was a strong and righteous energy field, which was detected by practitioners and passersby.

To promote Falun Gong, the Beijing Falun Gong Association organized a group exercise which was attended by a 1,000 practitioners on a Sunday during the fall of 1997.

As the music started, practitioners lined up immediately, listened to Master's recorded voice and did the exercises. The result was stunning.

Before the practitioners left for home they cleaned the field and even picked up garbage left by people, such as cigarette butts. The site was left very tidy, which surprised the sanitation workers. Quite a few sanitation workers started to practice Falun Gong.

Journalists from the British Broadcasting Corporation (BBC), America and South Korea interviewed practitioners and bystanders. They asked similar questions, such as, “How could the group exercises be so uniform, or how much time did it take to train you?” We replied that no one was trained, we just listened to Master Li Hongzhi's voice.

The journalists were very surprised and said, “Your Master has such a huge appeal. It is really remarkable.” 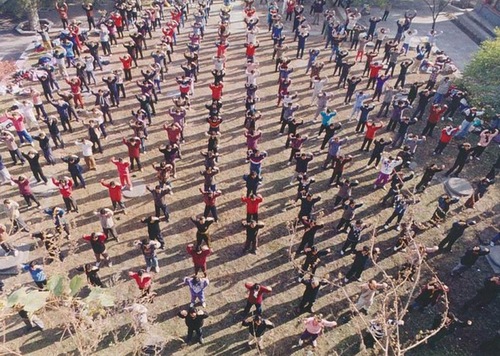 Practitioners also displayed cultivation experience-sharing articles for people to read, so they could understand Falun Gong.

At a practice site in Dongcheng, a man in his 50s read two experience-sharing articles. The man was moved to tears and decided to practice Falun Gong.

In the first article, a female practitioner had not gotten along well with her mother-in-law for many years. After her mother-in-law became a paraplegic, she started to practice Falun Gong. She changed her attitude and took very good care of the elderly lady. The lady said that she treated her better than her daughter and apologized because she had not treated her nicely in the past. The practitioner also admitted guilt and said that Falun Gong taught her to treat others respectfully.

On another practice site where 70-80 academics often visited, some cultivation experience-sharing articles were displayed. The articles mainly focused on keeping fit and healing illness.

Some of the readers doubted Falun Gong's effectiveness in healing illnesses. But, after these academics talked to practitioners and heard that they had returned to good health, some also wanted to practice Falun Gong.

In parks with practice sites, there were people who practiced other qigong. Some had their third eye open. They could see that the Falun Gong practice site was covered with a red light, and they even saw Master's Law bodies, and big Faluns.

“Falun Gong is really a divine practice! A practice that we have searched for many years but have not found,” some said. They became Falun Gong practitioners.

Mechanism Disturbed if Moved During Exercise

Practice sites in Beijing were open throughout the year during the early days of Falun Gong. Practitioners did the exercises outdoors in the morning, even during unfavorable weather conditions.

Over a hundred practitioners from several practice sites in south suburban Beijing did the group exercises together on one of the hottest Sundays in 1998. After the exercises, quite a few practitioners clothes were wet. Some practitioners said that they had entered into not only a relaxed state, but also could achieve a high mental state.

At a practice site in south suburban Beijing, there were bugs on the grass. A new practitioner opened his eyes because of leg pain and saw that a big ant was on a veteran practitioner's neck, but the practitioner did not move until the sitting meditation ended. When asked if he felt any pain the practitioner said, “I did feel pain. But it was a karma elimination process. What is more, the mechanism would have been disturbed if I moved.”

During a cold day and high winds in 1997 practitioners did the sitting meditation in the snow for an hour. None of them wore gloves. A few passers-by in their winter clothes stopped and watched the meditation. Passersby said, “Falun Gong practitioners can endure real hardship. We have such cold weather, yet they sit for such a long time without moving.”

I heard from a coordinator that at a practice site, a male practitioner in his 40s, did the sitting meditation on a newspaper all year round. He just added a piece of plastic cloth on days when it snowed or rained.

Practitioners Not Seen on Video

A practitioner recorded a video of a group doing the exercises attended by nearly a hundred practitioners in 1998. When they watched the video they saw a huge golden law wheel in the sky, but the practitioners did not appear in the video, with the exception of relatively new practitioners.

It was said that most of the practitioners in the video had reached the state of the crystal white body and entered the Buddha body cultivation stage.

I participated in a few large group exercise events in Toronto and Ottawa, Canada during 2014. I felt as if I was back in the old days when we did the exercises in Beijing.

I suggest that overseas practitioners, old and new, attend the group exercises organized by the Dafa associations and the daily exercises at each practice site.

“I Was Given Two Boat Tickets”