(Minghui.org) On September 27, as on all other days of Xi Jinping's visit to New York, Falun Gong practitioners held up banners and placards near the Waldorf Astoria and along roadways to the United Nations. The banners demand an end to the persecution of Falun Gong and urge China's top official to bring Jiang Zemin to to justice.

On Sunday, the banners were highly visible to passing traffic with fewer pedestrians on the streets than on weekdays. Practitioners held their protest banners aloft from 6:30 a.m. to 5 p.m. with many of their colleagues distributing flyers and other materials to passersby.

During that time, Xi's motorcade traveled to and from the hotel many times because of the United Nations' World Conference on Women and other activities.

Reporters from NBC and Columbia University interviewed a practitioner named Lucy, asking her why practitioners protested here. Lucy said, “Falun Gong has been persecuted in China for 16 year and it still continues today. It was Jiang Zemin who started the suppression. We are here demanding an end to the persecution of Falun Gong and asking Xi Jinping to bring Jiang to justice.”

Over 180,000 criminal complaints have been filed in China against Jiang since May. Among them nearly 300 are from Falun Gong practitioners in New York.

Li Qiong, who submitted a complaint to China's Supreme Court and Supreme Procuratorate was sent to labor camp four times because she refused to give up her belief in Falun Gong.

“I was force fed with highly salted water, hung up high for several days, and forced to sit on a small stool for months without moving or sleeping,” she said.

“To cover up these mistreatments, guards did these in solitary confinement so that other detainees would not know.”

Many people accepted materials from practitioners and some asked to learn more.

“By suppressing Falun Gong and the principles of Truthfulness-Compassion-Forbearance, the moral foundation in China is jeopardized and it will bring serious consequences. Stop the brutality against Falun Gong, as well as separating the nation from the Communist Party, is a concrete step towards a better future for the nation,” said Adler.

Friends of Falun Gong published a full page open letter to Xi Jinping on Monday in the New York Times. 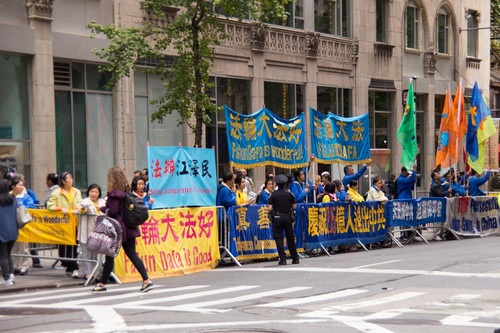 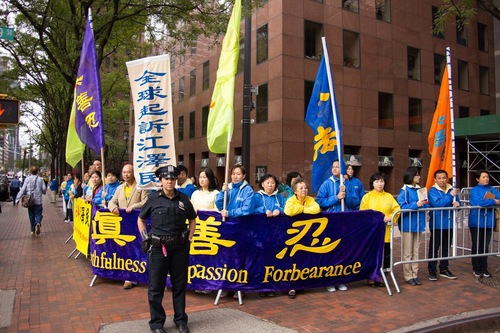 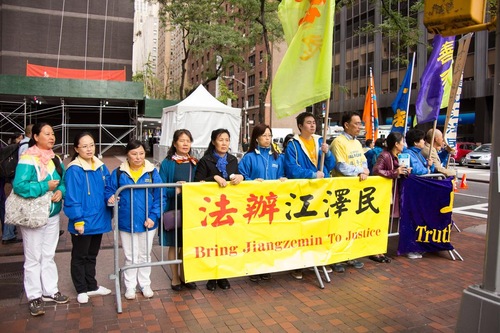 Banner with the words of “Bring Jiang Zemin to Justice”. 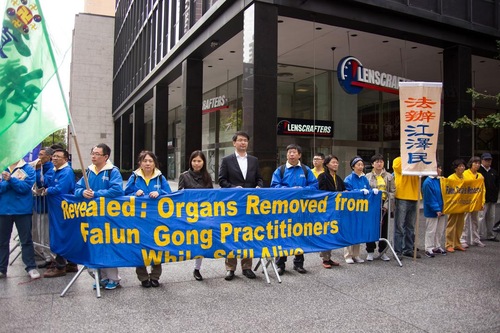 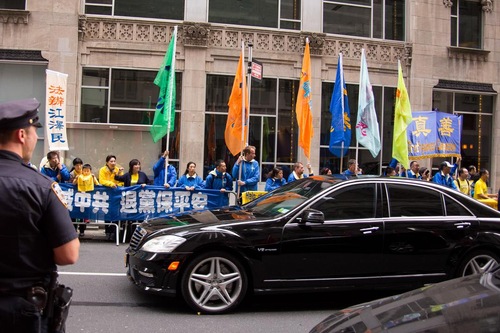 Banners on the roads where Xi's motorcade passed