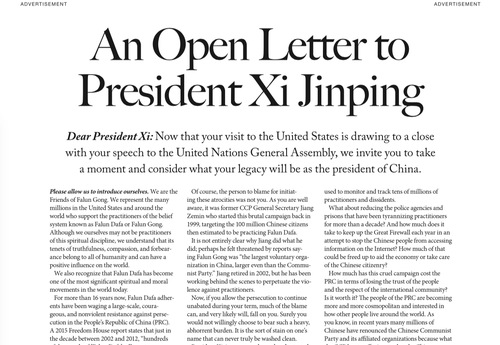 Open letter to Xi Jinping published in the New York Times September 28, 2015, the day of Xi's address to the United Nations General Assembly in Manhattan.

Friends of Falun Gong (FoFG.org) is a U.S.-based nonprofit organization of concerned Americans that supports the freedom of belief of persons who practice Falun Gong.

The complete text of the open letter follows:

An Open Letter to President Xi Jinping
Dear President Xi:
Now that your visit to the United States is drawing to a close with your speech to the United Nations General Assembly, we invite you to take a moment and consider what your legacy will be as the president of China.
Please allow us to introduce ourselves. We are the Friends of Falun Gong. We represent the many millions in the United States and around the world who support the practitioners of the belief system known as Falun Dafa or Falun Gong. Although we ourselves may not be practitioners of this spiritual discipline, we understand that its tenets of truthfulness, compassion, and forbearance belong to all of humanity and can have a positive influence on the world.
We also recognize that Falun Dafa has become one of the most significant spiritual and moral movements in the world today.
For more than 16 years now, Falun Dafa adherents have been waging a large-scale, courageous nonviolent resistance against persecution in the People’s Republic of China (PRC). A 2015 Freedom House report states that just in the decade between 2002 and 2012, “hundreds of thousands of [Falun Dafa] adherents were sentenced to labor camps and prison terms, making them the largest contingent of prisoners of conscience in the country."
During these 16 years, practitioners of the meditation practice have been living under constant terror. We have confirmed reports of over 3,800 innocent men and women dying from torture in custody, with thousands more maimed and disfigured. But the truth is, given the difficulty in getting information out of China, no one really knows the real figures. What we do know is countless numbers have simply disappeared after being detained or arrested. We fear they have met a fate worse than we can imagine.
In 2006, international human rights lawyer David Matas and the former Canadian secretary of state for Asia-Pacific, David Kilgour, completed a report investigating allegations of forced, live organ harvesting in China.  Based on their findings, they concluded that Falun Dafa practitioners were the only plausible source for 41,500 organ transplants performed in China between 2000 and 2005.

Experts believe this forced organ harvesting from Falun Gong practitioners continues in China today, with the current death toll unknown.
One need not be particularly religious or spiritual to agree that any government that engages in such non-consensual organ harvesting against innocent citizens has overstepped all bounds of human decency. David Matas once described such actions as “a form of evil the world has never seen before.”
We can’t help but ask ourselves: Who are the perpetrators of such an unspeakable crime against humanity? How could this be allowed to happen? And by what right does such a regime actually expect to continue to exist in a moral universe?
President Xi, you are the leader of a nation that comes from a vast cultural heritage. It is a land that has seen its fair share of glory as well as turmoil. Over the last 60 years, the Chinese Communist Party (CCP), with its atheist ideology, has found little use for the spiritual and moral beliefs of ancient China.
But the CCP now must understand that it was these traditional virtues—such as benevolence, honor, integrity, and tolerance—that made the Chinese civilization great, and any war waged against such virtues cannot, by definition, be a righteous one. Because what will be left in society when these virtues are gone, but hollow materialism, malevolence, deception, and fear?
ResponseToday, President Xi, you have a choice. Falun Dafa practitioners have long been bearing witness to the horrors of the labor camps, the torture chambers, and the operating rooms. The question now is how you will respond.
Of course, the person to blame for initiating these atrocities was not you. As you are well aware, it was former CCP General Secretary Jiang Zemin who started this brutal campaign back in 1999, targeting the 100 million Chinese citizens then estimated to be practicing Falun Dafa.

It is not entirely clear why Jiang did what he did; perhaps he felt threatened by reports saying Falun Gong was “the largest voluntary organization in China, larger even than the Communist Party.” Jiang retired in 2002, but he has been working behind the scenes to perpetuate the violence against practitioners.

Now, if you allow the persecution to continue unabated during your term, much of the blame can, and very likely will, fall on you. Surely you would not willingly choose to bear such a heavy, abhorrent burden. It is the sort of stain on one's name that can never truly be washed clean.
President Xi, it seems you have already started paving the way to end this nightmare. You have already shuttered the vast national system of “reform through labor camps,” half of whose inmates were reported to be Falun Gong practitioners. While practitioners are still being detained in large numbers in other kinds of facilities, you have taken away from the persecutors one of their principal weapons of oppression.
With great effort, and likely at some risk to your personal safety, you have also purged and jailed several of the highest-ranking members of Jiang Zemin’s faction, those responsible for pushing forward the persecution. You will be siding with history if you now take one more step and end the persecution once and for all.
You would hardly be alone should you choose to put an end to this persecution. According to reports by human rights groups and the media, the Chinese leadership has never been unified in supporting Jiang’s murderous campaign against Falun Dafa.
Sources say that certain members of the powerful Politburo Standing Committee and their families had even learned the Falun Dafa exercises and read some teachings. During the 90s in which almost one in every household in China practiced some form of qigong or other, Falun Gong was in fact touted by the Chinese government for its outstanding benefits for health and well-being.
Indeed, back in 1998, a year before the persecution began, National People’s Congress Chair Qiao Shi conducted an extensive study that concluded “Falun Gong offers hundreds of benefits to the Chinese people and China and has not a single bad effect."

In an article published in February 1999, the U.S. News and World Report quoted a China Sports Commission official as saying: “Falun Gong and other types of qi gong can save each person 1,000 yuan in annual medical fees. If 100 million people are practicing it, that’s 100 billion yuan saved per year in medical fees. Premier Zhu Rongji is very happy about that. The country could use the money right now.”

Perhaps your country could use that kind of money these days—which country wouldn’t? But Jiang’s campaign against Falun Gong has not only raised healthcare costs but has been expensive in other ways, too. We ask you to consider how many billions of yuan China could save each year if it scaled back the vast Golden Shield system that is used to monitor and track tens of millions of practitioners and dissidents.

What about reducing the police agencies and prisons that have been tyrannizing practitioners for more than a decade? And how much does it take to keep up the Great Firewall each year in an attempt to stop the Chinese people from accessing information on the Internet? How much of that could be freed up to aid the economy or take care of the Chinese citizenry?

How much has this cruel campaign cost the PRC in terms of losing the trust of the people and the respect of the international community? Is it worth it? The people of the PRC are becoming more and more cosmopolitan and interested in how other people live around the world.  As you know, in recent years many millions of Chinese have renounced the Chinese Communist Party and its affiliated organizations because what the CCP has to offer is not what the Chinese people need.

And hundreds of thousands of victims of the persecution have recently filed legal complaints in China’s courts charging Jiang Zemin with the crimes he committed against them. Never before have such large numbers of Chinese demanded a top Communist official be held accountable for his crimes, and it is unlikely they will rest until justice is done.

A ChoicePresident Xi, you have a choice. You can be known as the president who ended communist tyranny, who brought democracy to China by enforcing an independent judicial system, making real the guarantees of freedom of speech, freedom of the press, and freedom of conscience, and giving the Chinese people the power of self-determination.
You can be remembered for rooting out corruption and bringing the highest-ranking members of Jiang Zemin’s faction to justice—those responsible for pushing forward the persecution.
You can be remembered for ending the mass detentions, brainwashing, torture, and organ harvesting. You can be remembered for saving innocent lives.
Choose this path and the international community will applaud you and seek true friendship with China built on trust and respect. Do this and the Chinese people will bless your memory for generations to come.
Allow Falun Dafa to be practiced freely once again, and you will find a force for good in building a better future for China.
You may have heard of the Chinese human rights lawyer Gao Zhisheng. He had this to say about Falun Gong:
In contrast to the current situation whereby the humanity, conscience, morality, compassion, and ethic of responsibility of our society are suffering an overall deterioration, these cultivators [of Falun Gong], as a group reborn from the old nation, have impacted all of these areas in a positive way. One can feel the powerful way in which faith can change one’s soul. Indeed it has allowed me to see a spark of hope for rescuing our nation from its current depraved state.
Allow that spark of hope to light the way. Allow Falun Gong to be practiced freely, and there will be hope for China. Bring Jiang Zemin to justice and allow China to take its place as a free nation in the international community.

Take these steps and your legacy is assured.

“Healthy and Energetic in My Eighties Thanks to Falun Dafa”