(Minghui.org) “I’m proud that at least we have it here. It wouldn’t have been possible at Tiananmen Square,” said retired engineer John Schneider when he saw Falun Gong practitioners holding large banners near the White House on September 25, 2015, when President Obama met his Chinese counterpart Xi Jinping. The banners said, “Falun Dafa Is Great” and “Bring Jiang Zemin to Justice.”

John Schneider noticed the words “Truthfulness-Compassion-Forbearance” on the practitioners' T-shirts. He said, “Americans believe in individual conscience and determination in making your own decisions, and having the courage to do it. That takes a lot of courage. In this situation right here, I see people have enough courage to at least stand up for what they believe.

“I call it extortion. That’s the authoritarian repression of people expressing their individual conscience.”

Regarding the Falun Gong practitioners who filed criminal complainants against Jiang, he said, “It takes courage to stand up for what the back of that T-shirt is saying, that is, Truthfulness-Compassion-Forbearance. It’s not an emotional thing. It’s a matter of being especially articulate about the things that you believe should be exercised, to have a rational, calm determination. You will prevail if you articulate.” 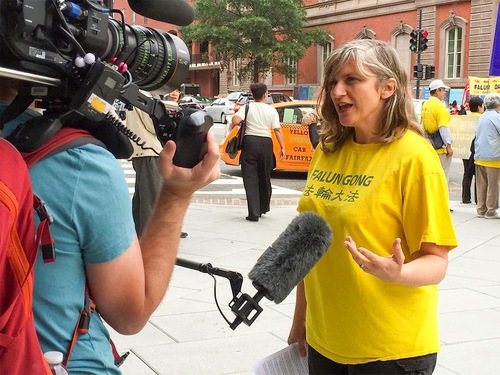 Practitioner Kery Nunez is interviewed by a TV station reporter. 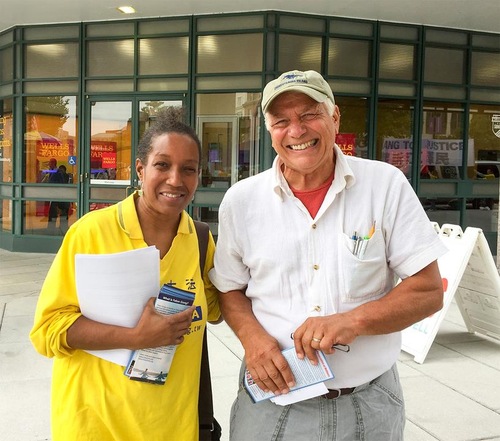 Retired engineer John Schneider poses for a photo with a practitioner.

Ms. Zhang from China said that she got negative information about Falun Gong in China and that she wanted to take this opportunity to learn more about the practice. She was impressed with the practitioners' peaceful action.

She was shocked to learn about the Chinese Communist Party’s (CCP) harvesting of organs from living Falun Gong practitioners.

Two Chinese people came forward to chat with practitioners to learn more about Falun Gong. A practitioner answered their questions about the CCP's misleading information.

Undergraduate student Saudi Young learned that Falun Gong practitioners were being persecuted for their belief. He said, “Falun Gong is one of the many persecuted groups in China just because they believe something different [than what the Party promotes]. They are not violent, not anti-government. They just happen to be different. Not only are they persecuted, but their organs are harvested and sold.

“Stay strong. Try to keep your culture. Not everyone should do the same thing because we say so. The traditions of China that have been there for thousands of years throughout the different dynasties have a proud history.”

Jeffrey is a lawyer who does business with China and works in a building near the White House. He said about the CCP, “Tremendous human rights violations and persecutions. It’s tragic that journalists can’t speak out. The government is tenuous and worried about any sort of dissent.”

For the plaintiffs of the lawsuit against Jiang, He said, “They should keep up the good fight. I for one hope that the United States continues to push China on its record of human rights.”