(Minghui.org) “This is an important lesson for my children. There is no freedom of speech and no human rights in China, but we seldom talk about it and there is no adequate coverage in the media,” said Petra Socolovsky, a journalist who brought her two children to see the scene near Chinese President Xi Jinping's hotel in Washington, DC, on the evening of September 24, 2015.

Falun Gong practitioners took advantage of Xi's visit to the US on September 24 and 25, 2015, to urge him to bring Jiang Zemin, former head of the Chinese Communist Party (CCP), to justice for his abuses of power in orchestrating the persecution of Falun Gong in China.

They held large “Bring Jiang Zemin to Justice” banners along the streets near his hotel when he arrived on the evening of September 24, 2015. Xi's motorcade passed the banners three times.

Petra told her children that Falun Gong is persecuted in China and explained why the people in red clothes who welcomed Xi attempted to obscure the practitioners' banners.

“My children--one is nine and the other is four--are old enough to know about this. I am a reporter. Everyone knows about Falun Gong and the persecution, and they know that there is no freedom of speech or freedom of belief in China.” 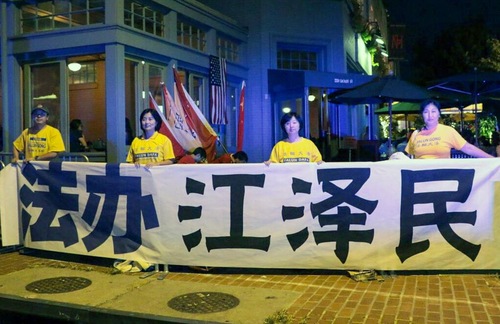 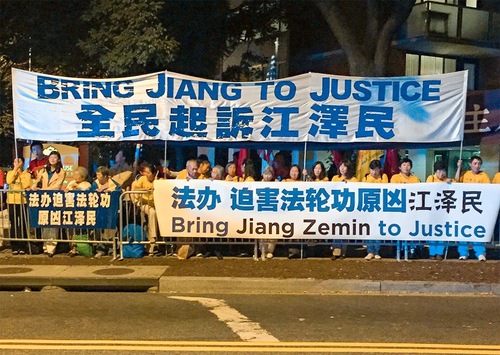 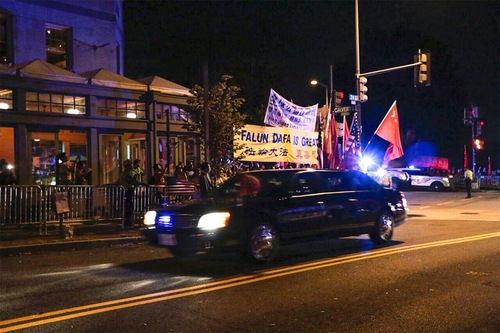 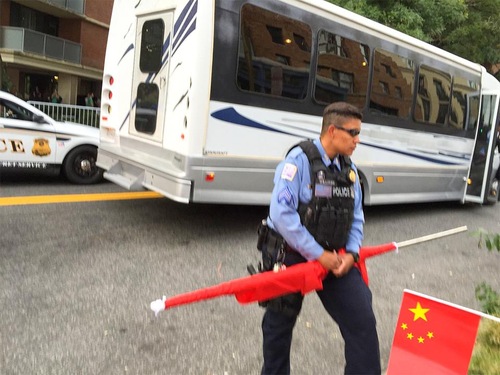 A police officer confiscates a Chinese flag from a person who was using it to obscure practitioners' banners. 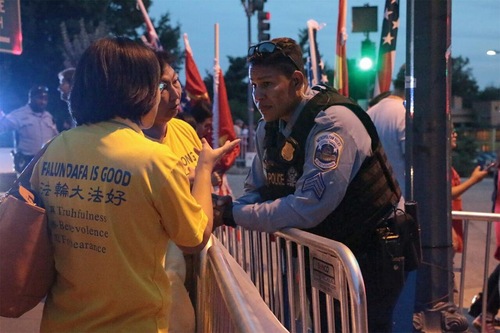 A police officer listens to a practitioner tell about how she was persecuted. 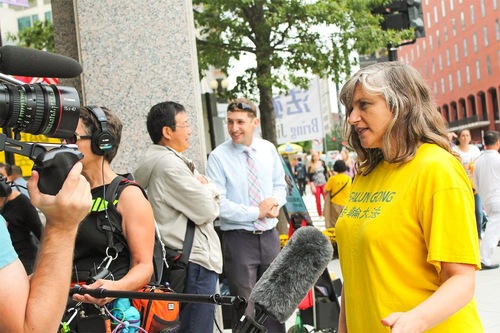 A mainstream media reporter interviews a Falun Gong practitioner near the White House on September 25. 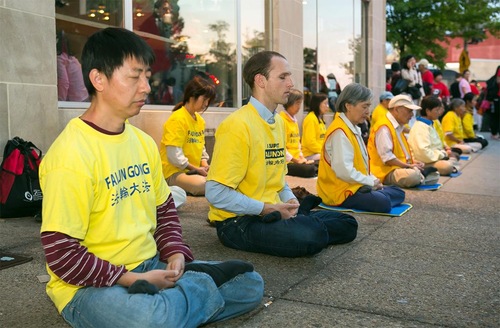 Practitioners doing the sitting meditation draw the attention of passersby near President Xi's hotel on the evening of September 24.

Xi's motorcade arrived at the Marriott Wardman Park Hotel a little after 6 p.m. on September 24. Practitioners held large banners facing the streets leading to the hotel. People in the motorcade read them as they drove by.

Xi and his delegation left the hotel for Blair House for dinner half an hour later. Several Chinese people attempted to obscure the “Bring Jiang Zemin to Justice” banner with their red flags. The police stopped them and told them to step back as Xi's motorcade passed by.

At around 10 p.m. when Xi's motorcade returned to the hotel, it again passed practitioners holding banners.

Ms. Yu Jing came to the US just a few months ago. She was arrested three times in China and almost tortured to death. She said she wished to add her voice to those demanding that Jiang be brought to justice.

Mr. Zhang Huidong held the large “Bring Jiang to Justice” banner from 5 to 10 p.m. on September 24. Originally from Dalian, Liaoning Province, China, he became disabled as a result of being tortured for practicing Falun Gong. His mother and two sisters were arrested many times and forced to do hard labor. His parents passed away due to the persecution. He urged Xi to sue Jiang, called for the dissolution of the CCP, and demanded an end to the persecution .

Nancy, who works at the Department of Agriculture, took photos with her cellphone of the practitioners doing the sitting meditation.

When she heard about the persecution of Falun Gong in China, she said, “They should have the freedom to practice. It is their right. I don't understand why the Chinese Communist government persecutes such people. I wish the media would report on the persecution in China so that everyone would know about it.”

Larry Williams and Marsha Myers, two retired editors-in-chief of the Baltimore Sun, accepted a Falun Gong flyer, read it, and talked with the practitioners. Myers said, “They are very peaceful.”

During Xi's visit, the CCP organized many local Chinese students and organizations to welcome him. Many Chinese people were happy to see the “Bring Jiang Zemin to Justice” banner. Some had their photos taken in front of the banner.

Several Chinese students talked with practitioners to learn the facts about the persecution. A student from Zhejiang said she was shocked to find out that the CCP had staged the Tiananmen self-immolation to defame Falun Gong and turn people against the practice.

“Use Wisdom and Compassion to Save Sentient Beings”