(Minghui.org) Today's news from China includes incidents of persecution that took place in 22 cities or counties in 10 provinces. According to this report, 24 Falun Gong practitioners were subjected to mistreatment during their detention, and at least 25 practitioners were illegally arrested. 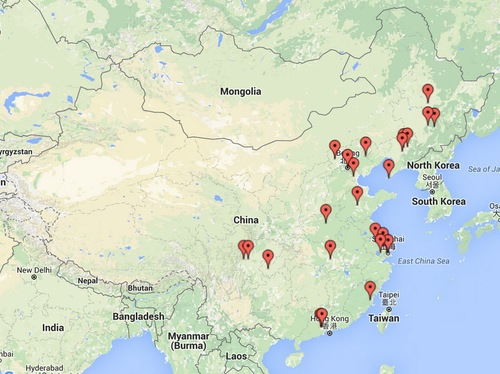 Mr. Liu Juntang was arrested and his home ransacked on August 27, 2015, for filing a lawsuit against Jiang Zemin, the former Party leader who instigated the persecution of Falun Gong.

Detention center officials told his family that they could take him home after they signed a statement stating that the officials were not responsible for what had happened to Mr. Liu. The family refused to sign, so Mr. Liu cannot leave the detention center even though he is still in critical condition.

Ms. Li Yaping was sentenced to four-and-a-half years in prison on September 8, 2015.

Mr. Cai Xi from the Chancheng District was arrested on September 5, 2015. The police ransacked his home the following afternoon. Mr. Cai's whereabouts are unknown.

Mr. Zhang Yongfu from Gangdong Village, Longhu Town, was arrested in December 2014 and released in April 2015. He is now mentally disordered from being tortured while in detention.

Several practitioners from Jingjiang City (under the administration of Taizhou City) were arrested in August 2015. Ms. Zhang Yuzhen and Ms. He Lizhen were detained for five days; Ms. Wang Yuqin's whereabouts are unknown.

Ms. Chen Liyan was arrested by officers from the Tong'erpu Town Police Department on August 10, 2015. Mr. Qu Luqing and his wife Ms. Li Chunyan were arrested the same day. All three practitioners were held for 15 days.

Mr. Zhang Xiansheng from Liujiazi Village, Lagu Township, was reported to the police for distributing informational materials about the persecution of Falun Gong on September 1, 2015. He was arrested by officers from the Fangxiao Police Station, and is being held in the Nangou Detention Center.

Mr. Xu Xinhua was arrested at work by officers from the Gangcheng Police Department and the Yanzhuang Police Station on the morning of September 8, 2015. He was taken to the police station, where samples of his blood and his fingerprints were taken.

He got dizzy and had a nosebleed 30 minutes later at the police station. The police took him to Xinkuang Center Hospital. He was given an electrocardiogram and had his blood pressure taken.

Mr. Xu's family was able to take him home later that day, but the police confiscated his cellphone.

Longjiang Police Station officers in Longtan District and community personnel harassed 80-year-old Ms. Sun Huiyuan at home on the afternoon of September 7, 2015. They questioned her about filing a lawsuit against Jiang Zemin. The police confiscated her Falun Gong books, but Ms. Sun took them back.

The same group of people went to harass Ms. Ji Suqin the following day. They took her to the police station before taking her to the hospital for a physical. Ms. Ji's blood pressure was 220/120 mmHG, so the doctors refused to admit her for treatment.

Mr. Zhang Shizhen and other practitioners from the Shunde District were arrested on August 31, 2015. The police confiscated Falun Gong informational materials and DVDs from Mr. Zhang's home.

Dagang District residents Ms. Li Fei, Ms. Li Bo, Ms. Du, and Ms. Liu Xiuzhen were arrested for talking to people about Falun Gong and the persecution on September 8, 2015. They were taken to the newly-established Guangang Brainwashing Center.

Three officers from the Duanjia Border Police Station in the Jinzhou District went to Ms. Wang Yanfeng's home on August 29, 2015, but she was not there. They forced their way inside her home and confiscated several photos.

The same officers went to Ms. Zhang Xiying's home on the morning of September 1, 2015. They confiscated nine Falun Gong books and 20 DVDs. Ms. Zhang was taken to the police station for interrogation about suing Jiang Zemin. She was released after the police forced her to sign some papers and took her fingerprints. On the afternoon of September 7, 2015, the police went to harass her at home again. Ms. Zhang was forced to leave home to avoid further persecution.

Dengshahe Police Station officers in the Jinzhou District ransacked Mr. Wang Zhenhong's home on the afternoon of September 3, 2015. They confiscated more than 10 Falun Gong books and a photo of the founder of the practice. Mr. Wang was taken to the police station for interrogation and forced to sign papers and give his cellphone number.

Mr. Lu Sugan was arrested by officers from the Jiangqiao Police Station on September 8, 2015. His home was ransacked.

Officers Sun Baochuan and Hou Yanling from the Tongtianjie Police Station went to the Guoyuan residential community and took Ms. Zhang Jinglan and Ms. Dai Aihua, (both in their 70s) to the police station on September 9, 2015. The officers took their photos, signatures, and fingerprints. Both women were held for 10 days.

On the afternoon of the same day, the police went to Ms. Wang Xiangjun's home and harassed her. Ms. Wang is also in her 70s.

The police interrogated each practitioner at the station. Mr. Mao was the only one held for five days; everyone else was released the same day.

Ms. Jiang Xizhe from the Dongfanghong Factory Area in Degan Town, Jiangjin City, was arrested by the Jiangjin Domestic Security Division in August 2015 for suing Jiang Zemin. She is being held at the Zhongkelong Brainwashing Center in Degan Town.

Ms. Leng Guanxiu, 60s, was arrested for talking to people about Falun Gong on August 31, 2015, and taken to the Anjing Detention Center in Pi County.

Ms. Du Guizhi, 78, and Ms. Li Zhongmei, 64, were arrested by three officers from the Beixinqu Police Station in the Qiaoxi District for posting informational fliers on September 7, 2015, and their home ransacked. They were taken to the police station and put in a cage from 8:00 p.m. until 3:00 p.m. the next day. The women were not allowed to eat or use the restroom during that time. Ms. Du was released several hours before Ms. Li.

Ms. Zhao Haiying was taken to the Xicheng Brainwashing Center on September 5, 2015.

Ten officers went to Ms. Xu Panzhen's home, and arrested her and her son Mr. Duanmu Junjie on September 8, 2015. They confiscated a computer. Ms. Xu was released the same day.

Mr. Wang Tingzhong, 69, a retired clerk from the Xiangyang Neighborhood; his wife; and their son were stopped on their way back to his son's home in Qinhuangdao City on August 28, 2015. The police found out that they practice Falun Gong and arrested them. Mr. Wang and his family were held in custody for more than three hours.

Ms. Wang Fenglan, 64, from Yangshuling Town was arrested on the afternoon of August 31, 2015. When she refused to cooperate with the police, they pulled her arms and bruised her left elbow. Both of her shoulders hurt for several days.

Ms. Bao Xiuying, 71, from Shuangqiaozi Village, Pingquan Town, and her family were on a trip on September 3, 2015. Officers from the Pingquan County Domestic Security Division interrupted their vacation and escorted them home. They threatened the family to not go out.