(Minghui.org) Falun Gong practitioners who came to the 2015 Falun Dafa Experience-Sharing Fa-Conference in Vienna held a candlelight vigil at the Stephansplatz on the evening of September 18, one day before the conference.

Located at the center of the city, this square is named after the renowned Stephansdom, Vienna's St. Stephen’s Cathedral, and one of the tallest churches in the world. About two millenniums ago, Christians were suppressed in the Roman Empire over a period of three centuries. They were torn apart by animals, crucified, and burned alive.

Similar things are happening again, in the 21st century. During the past 16 years, Falun Gong practitioners have been severely persecuted in China for their belief in Truthfulness-Compassion-Forbearance.

According to information received by the Minghui website, more than 3,800 practitioners have lost their lives due to torture while in police custody. Many more have been arrested, detained, imprisoned, tortured, subjected to forced labor, injected with nerve-damaging drugs, and become victims of live organ harvesting. 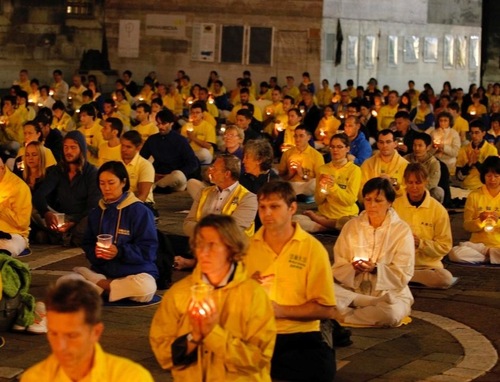 Michael Hofer and Julia Gegenhuber, two college students who were walking by, stopped to find out what the vigil was about. Upon learning that innocent practitioners were being mistreated for their beliefs, they joined the practitioners in the candlelight vigil.

After leaving his email address, Hofer said he would follow up on this human rights violation, and let more people know about it. 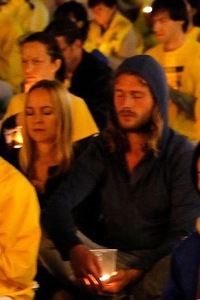 A banker who had traveled to many countries, including China, told his wife and daughter, who were visiting Vienna with him, that most Chinese people had been brainwashed by the Communist Party. When practitioner Djan told him about the organ harvesting from living practitioners in China, the banker was surprised by the atrocity. He signed the petition calling for an end to the brutality.

One company CEO said had not been aware of the suppression. He took some materials and said he would tell more people about it. 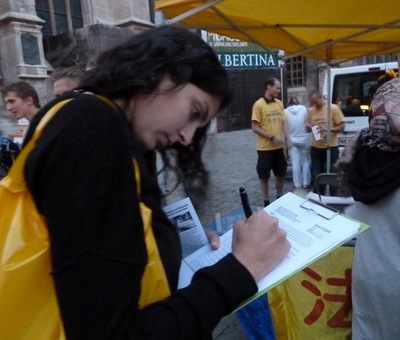 A woman signs the petition calling for an end to live organ harvesting in China.