(Minghui.org) The 2015 Australia Falun Dafa Cultivation Experience Sharing Conference was held on September 6, 2015 at the University of New South Wales (UNSW) in Sydney. More than 1,000 Falun Dafa practitioners from across Australia attended. 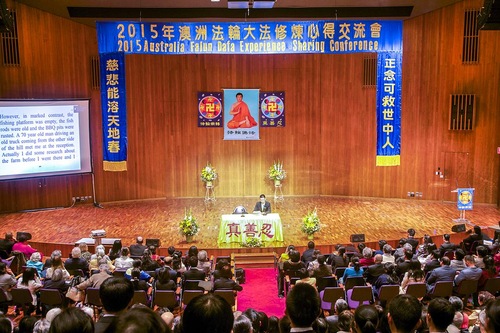 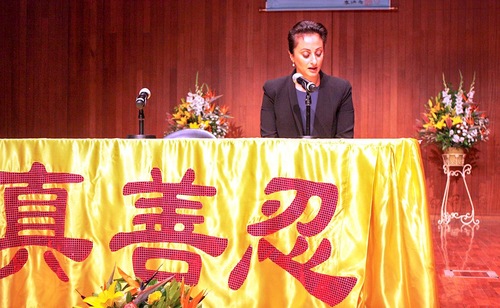 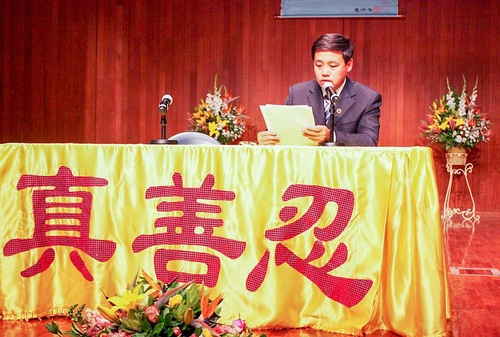 Practitioners present their speeches at the conference.

Cultivating Oneself Well Is Critical to Successful Coordination

Among the fourteen speakers, seven of them were coordinators either in their regions or in different projects. They shared something in common: When doing coordination work, they first regard themselves as cultivators and remember to look within. They understand that as coordinators, if they do not cultivate themselves well, they would hinder the improvement of the whole project. Thus, cultivating oneself well is essential.

Mr. Fan who once worked for China Radio International and is now an editor and reporter of Australia Broadcasting Corporation (ABC) is a coordinator in Melbourne. He shared, “After I became a coordinator, the first challenge I was facing was that I found some practitioners not cooperating, so I felt a bit upset and resentful.”

He later understood that things like that happened because he needed to expand his capacity. After looking within several times, he thoroughly let go of his resentment and had peace of mind.

“Cultivation is to cultivate myself. It is impossible to change others because the only thing I can change is myself,” he said.

Nina is a main coordinator in a region. She talked about her struggle with lacking self-confidence and underestimating herself. It negatively affected her in many aspects, especially while seeking support for an international art exhibition that she was coordinating.

In the process of eliminating this attachment, she tried to do things in an open and dignified manner, as she learned from Master's Fa teachings, and rectify herself. As a result, the MPs who had not replied started replying to tell her that they would come to attend the opening ceremony of the art exhibition. She shared that when she truly realized the importance of her thoughts and attitude toward the responsibility she shouldered, she felt Master's boundless compassion for her and all sentient beings.

Ms. Bai coordinates outdoor activities to raise awareness about Falun Dafa. She had not completed her primary school education and was unable to use a map, but she has a great sense of direction. She loads her car with informational materials and equipment, and then delivers them to various Falun Dafa activity sites. She also actively assists media reporters, taking photos and interviewing passers-by, and providing detailed, firsthand information to the media.

She said that when she puts saving people as top priority and does whatever Master requires without human notions, she can sense Master helping her.

Cultivating Dafa Made Me More Considerate and Forgiving

Ms. Wang began practicing Falun Dafa a few months ago. She shared how she benevolently resolved the years of grudges between her and her mother through cultivating in Dafa.

She said that after learning Dafa, she realized that she had been selfish and inconsiderate of her mother, and apologized to her. Her mother was deeply touched.

Her mother used to have a deep misunderstanding of Falun Dafa, and refused to read or take anything related to Dafa. But this time she said, “If Falun Dafa can change you into such a different person, I will believe it no matter what.”

The mother and daughter had a long conversation. They cried and hugged each other, and made amends.

Ms. Nie is one of the practitioners in Australia who has filed criminal complaints against former Chinese dictator Jiang Zemin for launching the persecution of Falun Dafa. She shared how participating in suing Jiang enabled her to make a break through in her cultivation.

She said, “During this 'suing Jiang' campaign, I experienced interference in the form of severe physical symptoms. Through this, I came to understand that I had not really cultivated my inner self according to the principles of Truthfulness-Compassion-Forbearance. If cultivators cannot break through their notions, let go of their attachment to self, and judge things with righteousness, they won't be able to ascend.

“Through suing Jiang and this tribulation, I've learned to think positively whenever I encounter any conflicts, and measure things with the Fa. When I do so, my mind becomes bright, and my field becomes spacious. I experience the magnificence and joy of true cultivation.”