(Minghui.org) Young Falun Dafa practitioners participated in an experience-sharing conference on August 12, 2015 in Cambridge, England. It was the final event of a Minghui School Summer Camp, where children studied Falun Dafa teachings, practiced the exercises and participated in other activities related to Falun Dafa and traditional Chinese culture.

Young practitioners from England, Ireland, Germany, Argentina and Norway wrote out some of their experiences to share at the conference. After the conference, a mother who is not a practitioner herself said she was glad she sent her two children to the summer camp. “It's refreshing to listen to the young practitioners. They are very innocent, good kids. This conference is filled with a positive atmosphere, devoid of worldly influences,” she said. 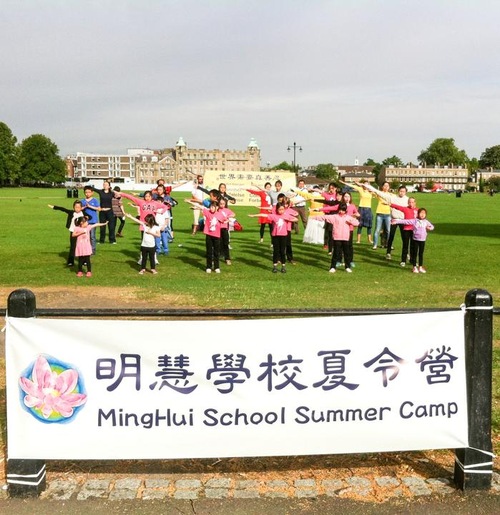 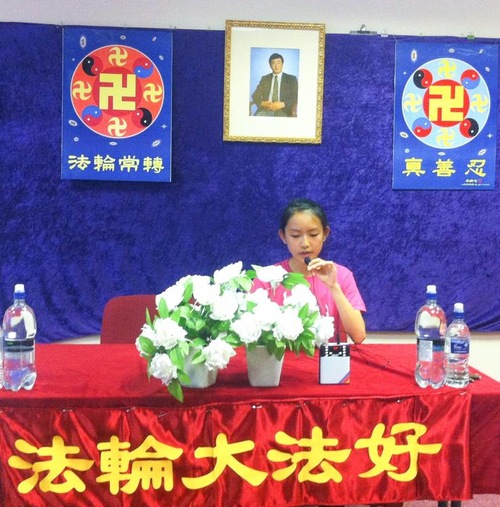 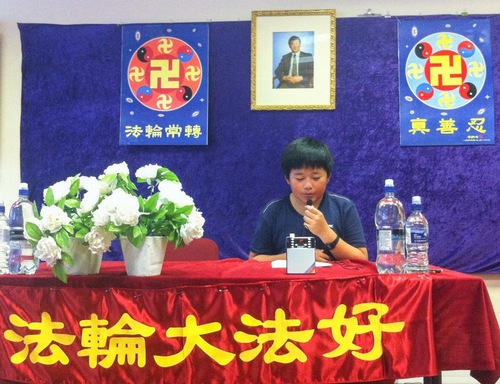 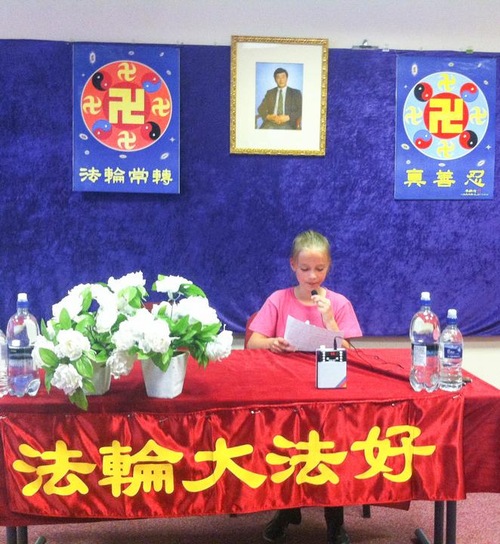 Young Falun Dafa practitioners share their experiences in the practice

A Lesson in Forbearance

Yuanyuan, 15, majors in piano at a music school in London. She shared about a challenge she faced at camp. “One of my roommates snored at night and I couldn't fall asleep, sometimes until three in the morning. However, I realized that I should practice forbearance,” said Yuanyuan. She tried not to complain and despite the sleep she lost, she wasn't tired at all.

She said the camp gave her encouragement to keep trying her best to follow Truthfulness-Compassion-Forbearance.

Tara, 9, and Bindi, 8, are sisters from Germany and they grew up practicing Falun Dafa because their parents are both practitioners.

Tara became very interested in classical Chinese dance during last year's Minghui Summer Camp in Germany. She was hoping to learn more about it this year, but she had a severe backache at the beginning of the camp, so painful that she couldn't move well. “I still insisted on finishing the exercises on Sunday morning and after that the back pain completely disappeared. Now I can dance!” said Tara.

Bindi shared that she once suffered an injury caused by her sister Tara while they were playing. She was very upset, but then she quickly remembered that she was a practitioner and that she should be tolerant. She let it go and happily continued playing with her sister.

From Being Naughty to Considerate

Jingxiu lived with his grandparents for a period of time when he was two and they adored him. After Jingxiu went back to live with his parents in London, he found that his parents paid more attention to his younger sister than him. He was jealous and tried to get his parents' attention by being naughty.

Jingxiu's parents talked to him a lot about it during the camp and he seriously thought about it. “My sister is younger than me and it is only natural that she gets more attention,” Jingxiu said. He became a lot quieter and was able to be considerate of others during group activities.

Yuanyuan, 14, from Ireland, said she had a lot of friends, but always felt that there was something missing. After being in the summer camp, she realized that what she was missing was spending more time with other practitioners. “I was very happy every minute of the camp! Everyone studies the teachings and works hard to improve themselves. I feel very comfortable here, like everyone is my sister or brother. I also began to get up early to do the exercises,” said Yuanyuan.

Growing up in Ireland, she didn't have much opportunity to speak Chinese. “I didn't like Chinese before. In the camp, I get to learn Chinese and study traditional Chinese culture.” She watched a cartoon with stories based on a Chinese classic and liked it a lot. Now she tries to study the teachings of Falun Dafa in Chinese.

“Visit of Detained Practitioner Results in Arrest and Detention”