(Minghui.org) While attending the 2015 New York Falun Dafa Experience Sharing Conference last May, twenty-four-year-old Lorenz Duchamps from Belgium was interviewed by Minghui on his experience in the practice of Falun Dafa.

He and his family—father, mother, and sister—all practice Falun Dafa. 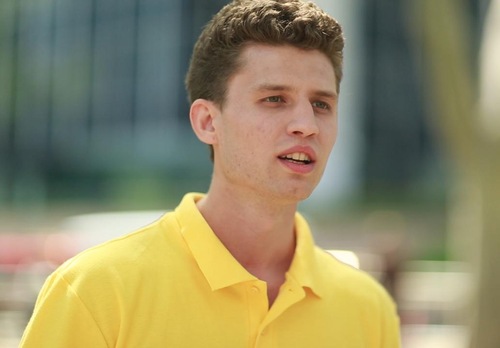 While other members of his family started practicing Falun Gong eight years ago, Lorenz didn't join them at first.

“At the time, I was not in a good mental state and I didn't really see the point of what I was doing in my life. I used to smoke and go out a lot,” he said.

About two years ago, Lorenz stopped to reflect on his life.

“I was thinking about everything, and I searched. I hung out with my parents a lot more. We talked a lot, and they said, 'You really should read this book [Zhuan Falun, the main text of Falun Dafa]. You have to start thinking about life.”

“At that moment, something happened to me,” said Lorenz. “I felt pure energy in my body that I cannot really describe. I started [cultivating] and it really changed everything -- the relationship with my father and mother, with myself, with my workplace. Everything changed, everything became more positive. It's a really beautiful practice, and I would recommend it to everyone,” Lorenz said.

Lorenz said that along with his mental elevation, came physical improvements. “I used to sleep a lot more. When I wasn't practicing, I would sleep 8-9 hours, but I would still feel unmotivated and had negative energy. Since I've started practicing, I can do very well with 5-6 hours of sleep. It changed me a lot in that aspect. I didn't have many health problems before, but now I feel a lot more energetic and positive.”

Working at a bakery, Lorenz deals with a lot of customers. He said that he tries to always conduct himself with Falun Dafa's principles of Truthfulness-Compassion-Forbearance.

“My work requires a lot of tolerance. Customers sometimes complain and make all kinds of demands. Now it's very easy for me, because when I look at the example given by Teacher [founder of Falun Dafa, Mr. Li Hongzhi], he is very patient and kind when answering all kinds of questions. I became a lot more tolerant. You see life differently and have more compassion towards other people. The harmonious energy that Falun Dafa brings really follows you in your daily life. You become a lot more kind, patient, harmonious, and serene toward others. It's really beautiful.”

Helping to Stop the Persecution

Lorenz said he is saddened by the persecution of Falun Dafa in China and the fact that many people have misconceptions about Falun Dafa due to the Chinese government's propaganda. He often spends his off-hours at the tourist spots, telling Chinese tourists what Falun Dafa really is.

“One time, an elderly man stayed for 10 minutes. I didn't say anything. I was just standing there, being very compassionate in my heart. He was really moved, and he started to cry. He was very thankful to me for playing this voice recording, because he knows the whole story about Falun Dafa now.”

Lorenz and his friends who practice Falun Dafa hold activities at the European Parliament, urging the politicians to help stop the persecution, especially the state-sanctioned organ harvesting from Falun Dafa practitioners in China.

“Politicians came out of their meetings just to tell us how shocked they were about what is happening in China today and that people in China don't know the true picture because the CCP [Chinese Communist Party] is keeping everything covered up. I was very moved by this.”

“When I first shared the news about organ harvesting at my workplace, many people didn't even believe it because it was so shocking,” Lorenz explained. Earlier this year a popular program called Telefacts VTM broadcast a movie called 'Human Harvest' [A film made in Canada on organ harvesting in China]. Lorenz said it had a big impact on people he met. He said, “More people are seeing that this is really happening and realize that it's all of our responsibility to stop it.”

“Practitioners from Beijing and Harbin Arrested for Suing Jiang”