(Minghui.org) A few hundred Falun Dafa practitioners in Taiwan gathered in Tainan City on June 28, 2015, to study the Fa and share experiences of making truth clarification phone calls to China.

Calling people in China is an effective way to reach those who have been deceived by the Chinese Communist Party's (CCP) lies and propaganda; to let them know about Falun Gong and the persecution and help them quit the CCP and its affiliated organizations. 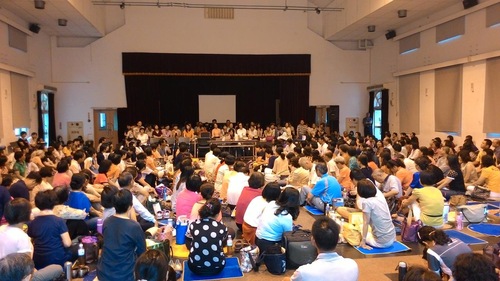 Practitioners shared many moving stories that encouraged others to be more diligent in their efforts to help the Chinese people see through the CCP's lies.

Zhang Fengqi is only 5 years old but he has been calling Chinese people five days a week for half a year.

Initially, Fengqi was frustrated when people hung up on him, but after sharing with other practitioners he understood that many Chinese are scared to talk about Falun Gong because they had been deceived by the CCP's propaganda.

Feeling pity for them, Fengqi gradually overcame his frustration and managed to help more and more people quit the Party.

Fengqi once called a man who patiently listened to him talk about Falun Gong and explain why he should quit the CCP. The man told him that he had joined the Young Pioneers and agreed to use the pseudonym “Yong Fu” to declare his withdrawal. The man thanked Fengqi before hanging up the phone.

After Zhang Fengqi's sharing, his mother, also a member of the telephone team, added that practitioners make phone calls in groups. No matter how many people quit the Party, it is always a team effort. It is important that everyone makes some phone calls every day and not to be attached to the amount of people quitting. By doing so, one feels fulfilled and at ease with their work.

Ms. Xiuyuan, an elderly woman from Tainan had not touched a computer until she joined the telephone team. She then asked her son to buy a computer for her, and began to learn how to use it.

Computers appeared to be harder to use than anything she had tried. Often times, she remembered an operation, but forgot it the next day. She had no knowledge of computer terminology, and not being familiar with the English alphabet on the keyboard made it even more difficult for her.

A practitioner remotely accessed her computer to teach her how to use it, but it still didn't help. Ms. Xiuyuan was frustrated for a long time, but she knew that a Dafa practitioner shouldn't shy away from difficulty, and should overcome by facing it head on.

She is now quite capable of operating the computer for simple processes and can type Chinese characters freely.

From her own experiences of making phone calls to China she said that one must be extremely patient when clarifying the facts to Chinese, as every phone call is a test to see whether our hearts are truly on saving lives.

Ms. Xiuyuan once worked on a calling project to inform people in China about a Chinese practitioner who had been arrested and was facing an illegal trial. She dialed a number and spoke to the director of a city department.

After telling him about the persecution of Falun Dafa in China, she asked the man to quit the Party. He immediately said “Yes.” As the director had a strong accent she confirmed with him again if he wanted to quit the Party. He answered “Yes” again. So she helped him quit with a pseudonym and was sincerely happy for him.

Saving People with Compassion, Patience and a Pure Heart

Ms. Ye from Kaohsiung City shared with practitioners that in order to save people one has to have compassion, patience and must wisely and thoroughly clarify the facts to people.

She once spent 37 minutes talking to a Chinese man, following his human notions and using her wisdom to convey the facts about Falun Dafa and the persecution. The man was very abrupt with her at first, but his attitude began to change as they talked.

As Ms. Ye was about to hang up, she sincerely told him to learn more about Falun Dafa and find a chance to quit the Party for his own safety.

The man was moved by her words and said, “You are truly kind and compassionate. We've had a pleasant conversation today.”

The man eventually agreed to quit the Party. He thanked her and invited her to call his number again anytime.

Many Chinese People Hope the Communist Party Will Collapse Soon

Ms. Suzhen told a story that a Chinese man willingly quit the Young Pioneers, a party affiliate, and hoped the party would collapse soon. He said that Chinese people have no freedom to express their real opinions.

He knows that the CCP has killed approximately 80 million Chinese in its various political campaigns and thousands of Falun Gong practitioners during the ongoing persecution. He also complained about the party's corruption and was happy to hear that the movement to quit the Party was bringing hope to the Chinese people.

Ms. Liao talked about a project focused on calling Chinese lawyers. The project was quite successful as they had found more than 4,000 lawyers in mainland China who agreed to defend Falun Gong practitioners and had thousands of lawyers agree to quit the Party and its affiliates.