(Minghui.org) Falun Dafa practitioners hosted two rallies in Houston to support the wave of lawsuits against former Communist Party leader and dictator Jiang Zemin. It was Jiang who ordered the persecution of Falun Dafa in 1999.

Several Falun Dafa practitioners who escaped the persecution and moved to Houston brought a copy of the complaints they recently filed against Jiang to the rally in front of Chinese Consulate on June 30.

Another rally in Chinatown raised the awareness of the wave among the oversea Chinese residents three days ago. 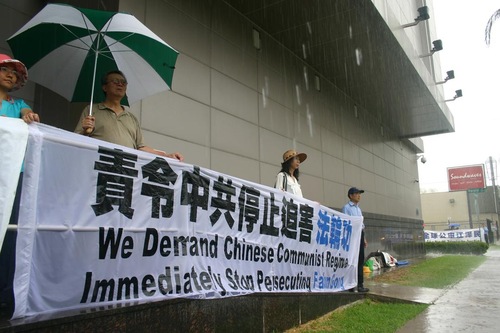 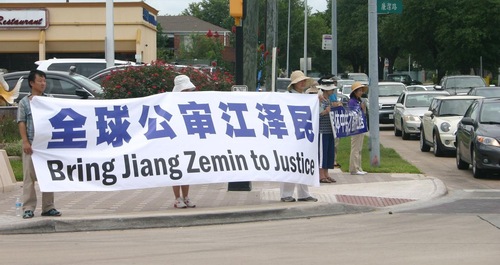 Rally in Chinatown raised the awareness of the movement of suing Jiang Zemin to the oversea Chinese.

According to Minghui website, more than 20,000 Chinese Falun Gong practitioners have mailed criminal complaints against Jiang Zemin since May 2015.

Several Falun Dafa practitioners escaped the persecution and moved to Houston joined the wave by mailing their complaints to the Supreme People's Procuratorater and Supreme People's Court in Beijing.

Many people who came to the Chinese Consulate for visas read the banners and watched the Falun Dafa practitioners standing solemnly in the heavy rain. The banners printed, “Bring Jiang Zemin to Justice”, “Disintegrate the Chinese Communist Party and Stop the Persecution” and “Stop Forced Organ Harvesting from Living Falun Gong Practitioners”.

Several practitioners read their complaints against Jiang at the rally in front of the Consulate. They had been illegally detained, jailed and tortured.

The rally in Chinatown was along Bellaire Boulevard, a major road through Chinatown. Practitioners unfurled banners along the street and passed out fliers to the passersby.

“San Francisco: Rally at Chinese Consulate In Support of Lawsuits Against Jiang Zemin”