(Minghui.org) Tourists who visit Paris like the Galeries Lafayette flagship store, a grand ten-story structure with a history of over 100 years. It is a place selling quality watches, perfume, and fine wine. Chinese tourists, in particular, are now also able to see and learn things there that are rarely accessible back in China.

“We often come here and tell Chinese tourists the facts about Falun Gong, from the basics, to the persecution in China.” Ms. Chen explained, “The Chinese Communist Party (CCP) has defamed and suppressed Falun Gong for 16 years. Chinese people need to know the truth and stop blindly following the regime.” 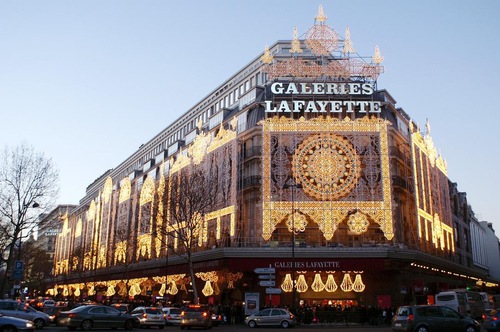 Through the efforts of Ms. Chen and other practitioners, many Chinese have learned the true story about Falun Gong, and become supportive.

One day Ms. Chen greeted a tourist and handed him a pamphlet. The man said, “I have read some of these materials. Actually I used to work at a 610 Office in the police department, but I was never involved in arresting practitioners.” After acknowledging Falun Gong's benefits for mind and body, as well as the principles of Truthfulness-Compassion-Forbearance, he asked, “but aren't you too political?”

Ms. Chen replied, “Please take a step back... Before the persecution started in July 1999, would you consider Falun Gong political?” Ms. Chen explained that practitioners wanted nothing but to freely practice their belief. But now, practitioners from all walks of life are being arrested, detained, and tortured. Many have died and even become victims of live organ harvesting.

“When an innocent person is murdered and calls for help, would you call that being 'political'?”

“What you said makes sense,” the man nodded.

“As you know, the persecution is still continuing right now. That's why we want people be clear on what is right and what is wrong. Plus, following the CCP to harm innocent people won't do a person any good. Have you thought of separating yourself from the regime?”

The man agreed and thanked her. 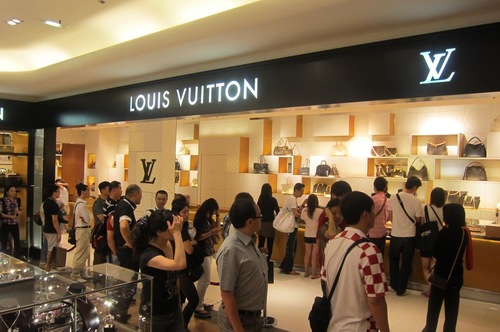 Chinese tourists inside the Galeries Lafayette

Many Chinese students now travel overseas for summer vacation or summer camps. Ms. Chen once chatted with a girl from one of these tour groups and told her that a person should think independently. “Many of the Chinese students work hard and memorize well what the teachers have taught. On the other hand, students in Western Society tend to be open-minded and more creative.”

“A similar situation applies to the CCP's defamation of Falun Gong. A person should not be persecuted for being a better person.” Ms. Chen then asked if the girl had joined any CCP organizations, and helped her quit the Youth League.

The girl went back to her group, and more students came up to find out more. In the end, 15 students renounced their memberships in the CCP organizations with Ms. Chen's help. “Thank you very much!” the students said to her as they left happily.

“The CCP May Soon Collapse”

One young tourist was a descendant of the Manchu royal family. He said the communists confiscated his family fortunes and killed some family members. “The CCP is really bad, and it would not accept good people like you.”

Another tourist was hesitant, but later changed his attitude and quit the CCP after talking with a practitioner. “I didn't realize until today that China is different from the Chinese Communist Party. We should cherish traditional culture while giving up on the Party. In fact, China will become better without the Party.”

Ms. Chen said that more Chinese are becoming aware of the facts about Falun Gong. Once after she advised one tourist to recite “Falun Dafa is good” and “Truthfulness-Compassion-Forbearance is good,” the tourist said to another member of the touring group, “These words are good. Why don't you give it a try too?”

He then turned to Ms. Chen, “The CCP may soon collapse. We sincerely hope to meet you again in China.”

“Help From All Sides in Filing Lawsuits Against Jiang Zemin”