Chinese Tourist: “Everyone in My Large Family Needs to Quit the CCP”

(Minghui.org) Falun Gong practitioners from Germany and France held a Falun Gong Information Day on May 23, 2015 at Titisee Lake in Black Forrest, Baden-Württemberg, Germany. They distributed flyers in different languages to tourists from all over the world, and collected signatures on a petition to stop the persecution.

A large number of tourists visit this famous tourist spot daily. They took informational flyers, read display boards, and talked with practitioners. Many decided to sign the petition. 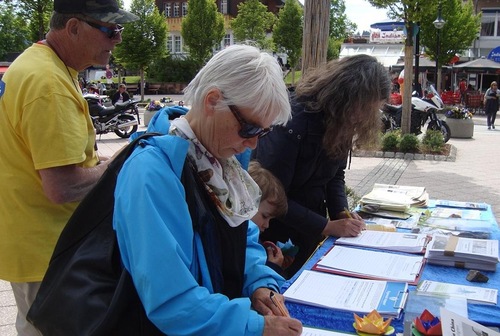 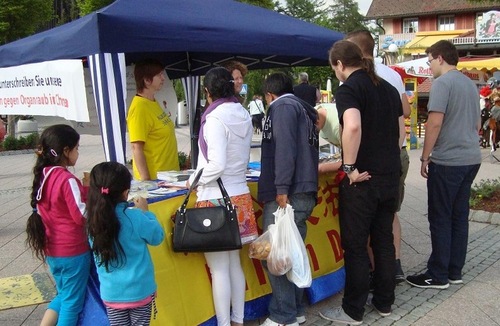 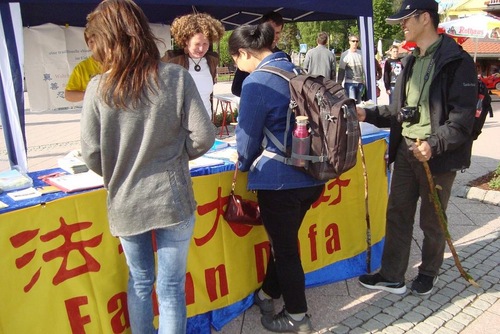 A German nurse signed the petition, and thought anyone would want to sign it. 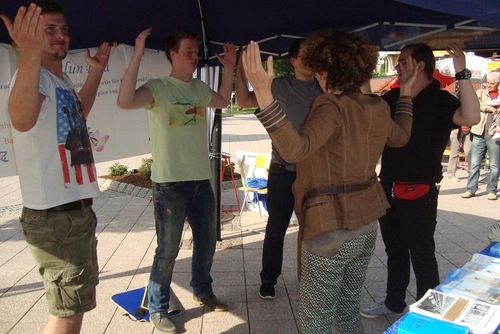 Four German young men learned the exercises and commented they could feel the strong energy.

A practitioner handed a Chinese couple informational materials, but at first they refused to take it. The practitioner told them, “It's OK if you don't want the informational materials, but the opportunity to quit the Chinese Communist Party (CCP) may be gone if you miss it.” She further explained the danger of being associated with the Party when they fall. The couple listened carefully.

The man finally asked, “Is the number of withdrawals reliable?” The practitioner replied, “The actual number is higher than 200 million. Many Chinese people would like to quit Communist organizations, but don't have a way to break through the Internet blockade to get on the overseas websites.” The man wanted to know the website to quit the Communist organizations. The practitioner gave him a copy of the Epoch Times newspaper and told him how to find the website.

The practitioner offered to help them quit on the website. The man said, “If there is danger in not quitting these organizations, it's not just my own life, but dozens in my entire family. Who hasn't joined Communist organizations? Everyone in my large family needs to quit the CCP. Wouldn't it be too late to regret when our lives are endangered?”

The practitioner agreed, “Why don't you quit now to be safe? Don't bet your life on the CCP.” The man nodded his head, and used his true last name to quit the Communist organizations he had joined. He took the newspaper and thanked the practitioner before he left.