(Minghui.org) Although the ancient practice of Falun Gong originated in China, a large number of Chinese have been misled by Chinese communist's vicious propaganda that has been a major part of the persecution since 1999. When touring in overseas cities, however, they are able to encounter things and information that they could not access back in China.

Falun Gong practitioners from Paris often come to tourist sites such as the Eiffel Tower, where a growing number of Chinese tourists have visited in recent years.

“Many Chinese people have been heavily influenced by the Chinese Communist Party (CCP)'s propaganda,” said Ms. Jun who often comes to tourist site. “It's not easy for them to believe us.”

It requires both patience and compassion when practitioners tell tourists the real story of Falun Gong as well as why the CCP persecutes innocent practitioners. “It took me a long time to talk to one of the tourists today. But in the end he agreed to quit the Party and separate himself from the regime,” said Ms. Jun. In addition, the tourist insisted on quitting the Party with his real name, not an alias.

“This shows his sincerity and courage,” she said with a smile. 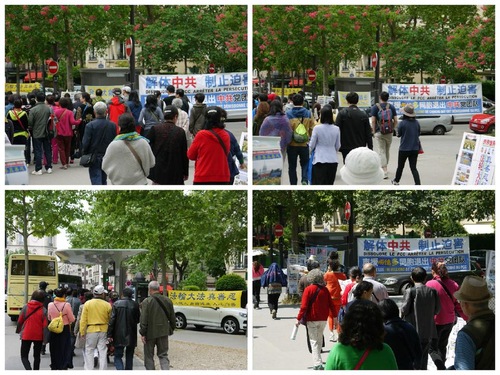 Another practitioner, Ms. Jing, had a similar experience. “I spoke with a tourist yesterday, but he just listened and did not say a word. Today he came here again and asked me to submit a withdrawal from the Party for him.”

Tourists have also showed interest in learning Falun Gong. One day when Ms. Jing was doing the sitting meditation, several tourists came by. “Hey, it's Falun Gong again!” said one woman said to others with excitement, “They are good people.” “Of course they are,” replied a man. He then called aloud, “Falun Dafa is good! Truthfulness-Compassion-Forbearance is good!”

This group came back after about half an hour and the woman tourist spoke with a practitioner and made arrangements to get the exercise music from her via email.

“Since we started to do meditation here, many Chinese tourists have been interested in learning the exercises,” Ms. Jun explained. “I am so happy for them.” 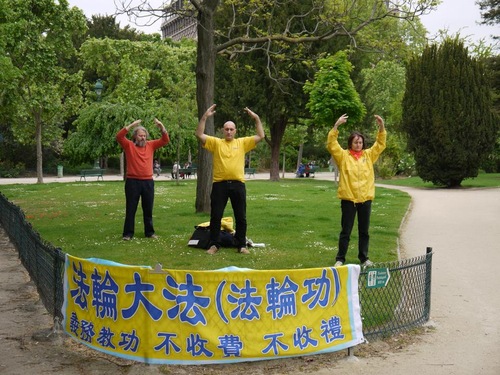 “The Netherlands: Signature Collection in Alkmaar”