(Minghui.org) Today's news from China includes incidents of persecution that took place in 8 cities or counties in 6 provinces. According to this report, 13 Falun Gong practitioners were subjected to mistreatment during their detention, at least 6 were illegally arrested and the whereabouts of 1 is unknown. 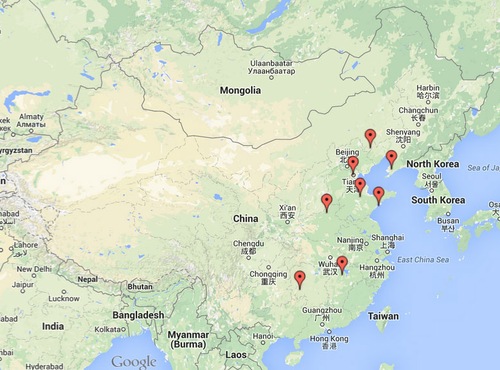 Ms. Tian's husband, Mr. Ma Zhanquan, is in Pinggu Detention Center. It is unknown where Ms. Wang's parents and Ms. Xiao's husband are being detained for practicing Falun Gong.

Ms. Yi Changlian, 65, was arrested around April 20, 2015, for telling people about Falun Gong. She has been held in the Erqibeilu Detention Center in Nanchang for half a month.

Mr. Liu Yunfeng and Ms. Guo Chunyan were arrested by officers from the Wafangdian Police Department, the Lingdong Police Station, and the Zhanqian Police Station on May 3, 2015. Mr. Liu was released that night after failing a physical. Ms. Guo has been held in the Dalian Drug Rehabilitation Center.

It has been over 10 days that no one knows where Mr. Zhang Hongbin is.

Mr. Zheng Jiajin, 75 and retired from the Railway Tunnel Group, was arrested on November 3, 2014. He was held in a detention center. His family was not notified when he was tried on April 24, 2015. He was secretly sentenced to seven and a half years in prison on April 30.

Ms. Lin Qunzhen was also secretly sentenced to two years in prison on the same day.

Mr. Ma Fujian, 43, from Shanxi Province works in Shandong. He was arrested by officers from the Guoli Town Police Station on the morning of May 1, 2015, for talking to people about Falun Gong. He was taken to the Huantai County Detention Center where he is tortured and his life is in danger.

Mr. Xiang Youhai, a retired primary school teacher, in his 60s or 70s, distributed Falun Gong informational materials on the morning of May 3, 2015. He did not return home that day. The next morning he was seen handcuffed in the County Chinese Medicine Hospital. Yang Manyu, Lin Mude and officers from the Domestic Security Division ransacked Mr. Xiang's home that afternoon and confiscated a photo of the founder of Falun Gong, a notebook, and three DVDs.

Mr. Wang Jingyu, in his 60s, from the No. 3 Group, Gasi Village, Daming Town, was sentenced to three and a half years in prison. He was taken to Chifeng Prison on March 19, 2015.

Ms. Wu Xiurong and Ms. Zhang Xiangyun were each sentenced to four years in prison. Ms. Tian Shuying, Ms. Wu, and Ms. Zhang were taken to the Hohhot City Prison.

Ms. Wang Yuying from Xizi Town in Ningcheng County was reported to the police for telling people about Falun Gong in a farmers market on March 28, 2015. She was arrested by officers from the Xizi Police Station. She is detained in the Ningcheng County Detention Center.