(Minghui.org) Of all the 16th Falun Dafa Day celebrations around the world last weekend, the one in Hong Kong on May 10 was perhaps the largest in the Chinese community.

That morning, hundreds of practitioners from Hong Kong played waist drums and demonstrated the exercises at Edinburgh Place. They wished Master Li Hongzhi a happy birthday with several songs they had composed. 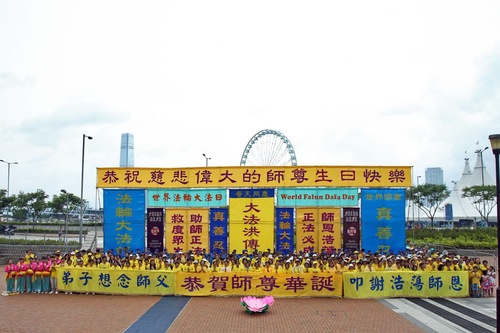 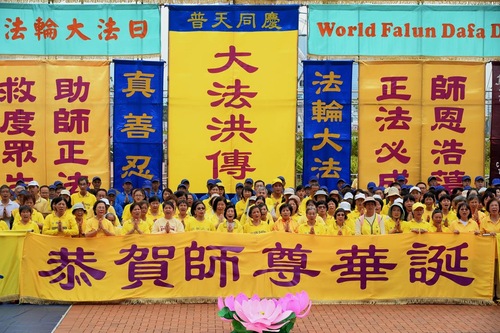 Celebrating at Edinburgh Place. The banner on the stage reads “Happy Birthday, Revered and Benevolent Master.” 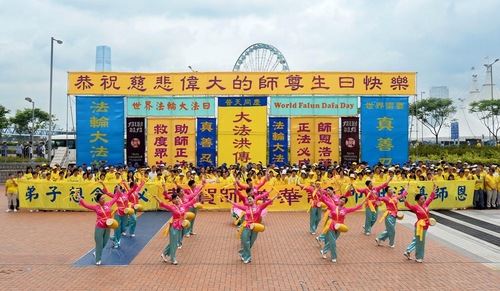 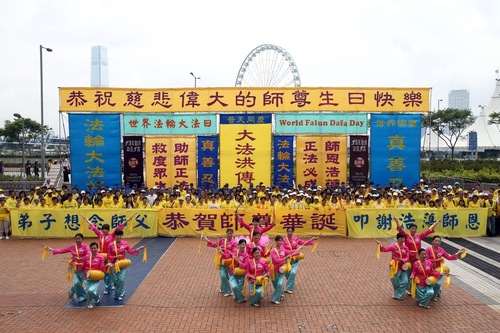 Led by the Divine Land Marching Band, the Falun Gong procession took off from Victoria Park, passed through Causeway Bay and Central, the busiest districts in town, and ended at Sun Yat Sen Memorial Park. The afternoon parade lasted for two hours. 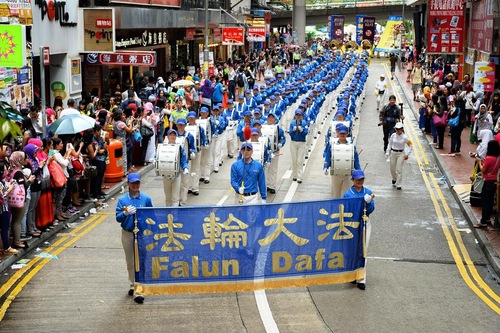 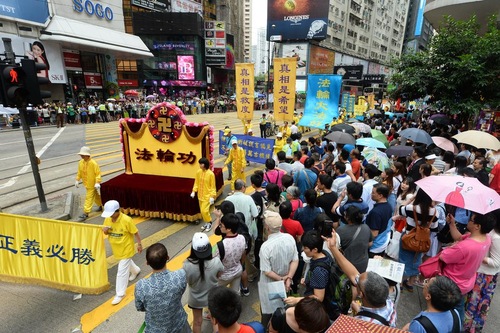 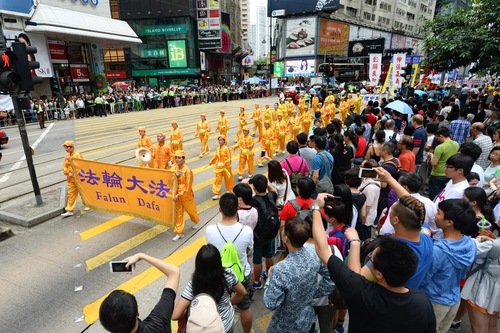 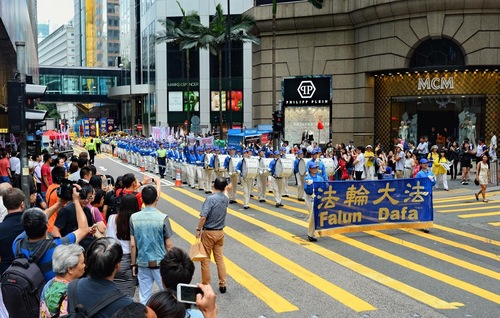 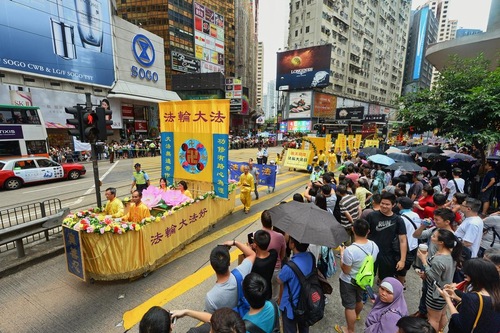 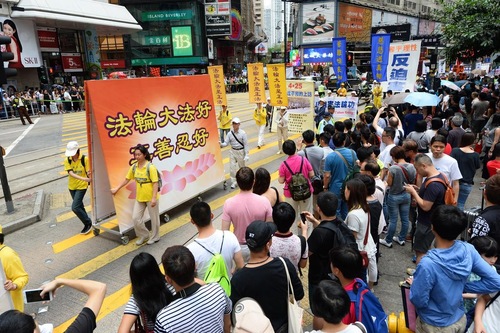 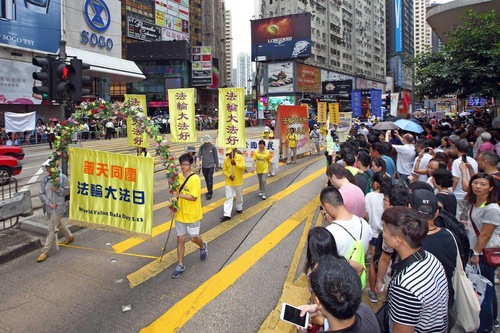 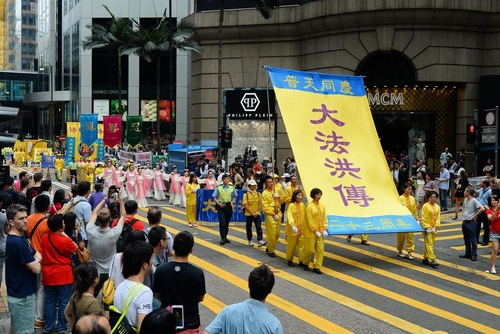 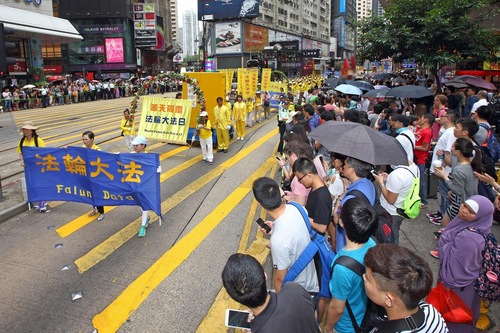 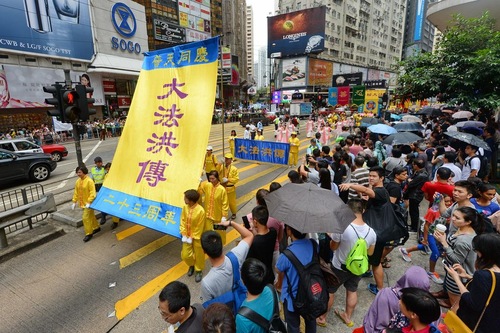 The Falun Gong procession winds its way through the busiest streets in Hong Kong as tourists take photos and videos. 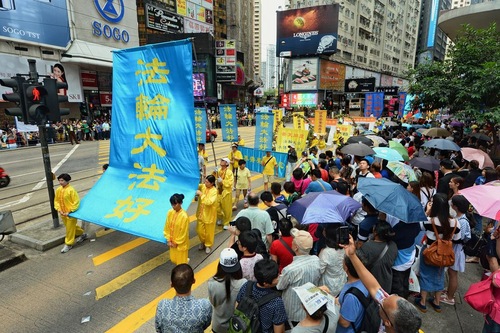 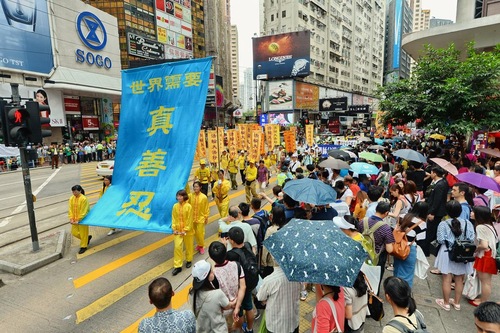 The banners say, “Falun Dafa Is Good” and “The World Needs Truthfulness-Compassion-Forbearance.” 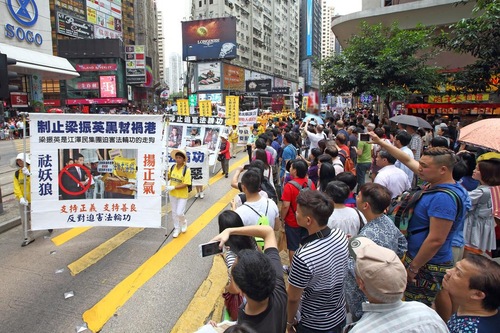 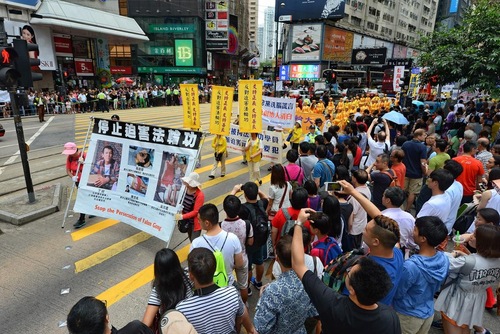 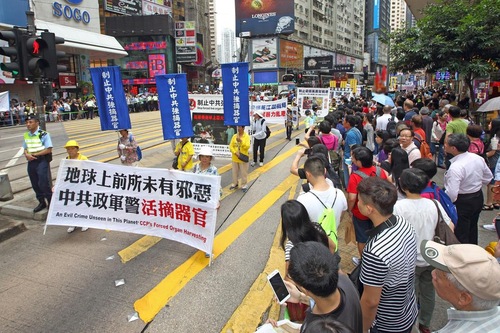 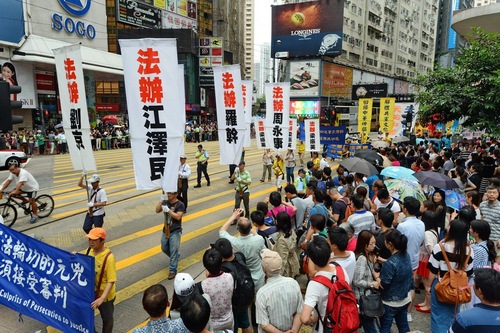 The banners call for an end to the brutal persecution of Falun Gong in China. 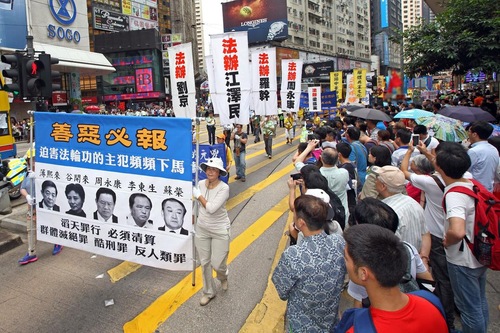 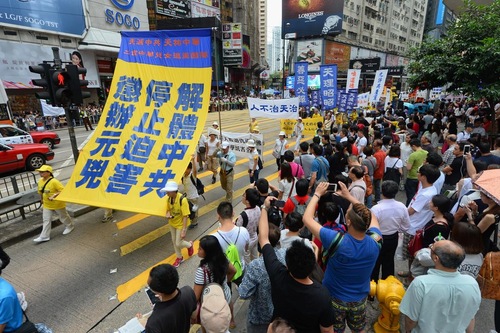 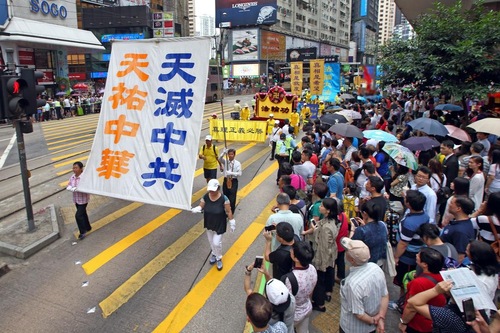 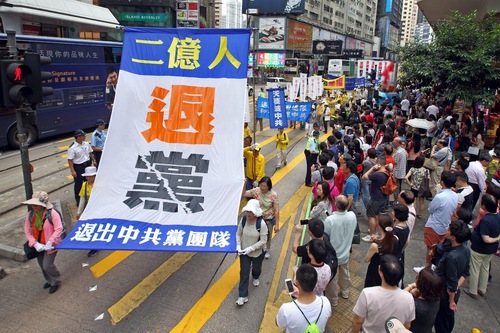 The banners call for the disintegration of the Chinese Communist Party and bringing those guilty of carrying out the persecution to justice.

Many locals and Chinese tourists witnessed the magnificent celebration.

Ms. Zhou from Guangzhou, China, was amazed: “It's very impressive. You can't see this in China. I am taking videos on my phone to show to my friends.

“It's so different from what the communist party says it is. What Falun Gong teaches--Truthfulness-Compassion-Forbearance--is definitely good.”

Julie, a student from Beijing, echoed Ms. Zhou's sentiments: “The suppression is wrong. Everybody should have freedom of belief.”

He praised Falun Gong practitioners' peaceful resistance in the face of the persecution over the past 16 years. He also condemned the recent violent attacks on Falun Gong that were instigated by the communist party.

“What Falun Gong practitioners have demonstrated to us is that the pursuit of freedom cannot be suppressed. On the journey to universal human values, more and more people will join us.”

Dr. Cheng said, “Despite the persecution, Falun Gong has spread all over the world. It shows the amazing power of 'Truthfulness-Compassion-Forbearance' in uplifting one's spirit. I admire the spirit of Falun Gong practitioners as demonstrated in their peaceful resistance.”